Modern Israel exhibition tells only half the story

Telling the story of modern Israel is no easy task. Since declaring independence in 1948, and indeed in the years running up to then, the nation has been in dispute with neighbouring countries and Arabs demanding a state truly independent state of Palestine.

Over the last 65 years thousands have died, on both the Israeli and opposing sides, in fighting and there have been multiple atrocities on innocent civilians. But getting everyone to agree to a single narrative of events would be near impossible.

The Israeli Museum, on the edge of Tel Aviv, attempts to chart independence through the life and times of Yitzhak Rabin, a career politician and one time commander of the country’s armed forces. He was assinated in 1995 by right wing, Jewish extremists as he addressed supporters, just a year after having secured in the Oslo Accord one of the most important peace agreements in modern Israel’s history.

It’s from the years running up to independence in 1948 to Rabin’s murder in 1995 that the exhibition focuses on. Through perhaps one of the most impressive uses of multi-media that I’ve seen at a museum (audio automatically starts on your personal headset as you approach displays and videos), both the personal and national stories emerge.

Some of the narrative seems quite brave to me. As well as the displays telling us that 6,000 soldiers and civilians died in the Arab-Israeli war of 1948, we are also told that 650,000 Palestinians were displaced from their homes, but acknowledges that Israel did not permit the the refugees home once the fighting was over.

And there is space given to Yom Kippur and the national outrage when the military was caught ‘off guard’. Israel won the battles, but many soldiers’ lives were lost.

However, when it comes to the Six Day War of 1967 the story is more one-sided, essentially blaming provocation from neighbouring countries. It simply had to retaliate, according to the text on displays. Others would argue that Israel started the fighting.

While a commendable exhibition, stopping the story in 1995 has it’s limitations, not least that since then illegal Israeli settlement building in the West Bank has increased, to the extent that there are now around 500,000 settlers. This of course goes against the Oslo agreement made in 1994 to provide a home for the Palestinian people.

And since Rabin’s death Israel has blockaded Gaza in protest of a Hamas-led government in the strip and invaded Lebanon in the face of Hezbollah militants. The second Intifada (uprising) may have come and gone, but peace still seems a long way off.

This latest history deserves to be properly charted. But it’s going to take some bravery to complete the story and debate the last two decades of Israeli politics. 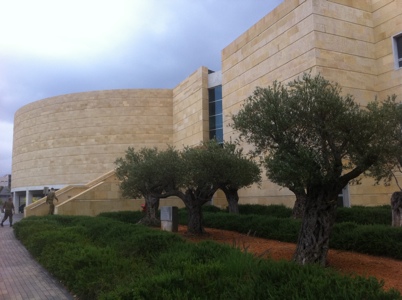