By Editor on June 14, 2012 • ( Leave a comment )
Planning officials today would tell you exactly where to go if you offered them a rose as payment for building a footbridge across a public road without permission. But that’s exactly what was imposed when in 1381 Mrs Knollys was rebuked for creating a structure to connect her husband’s City house on Seething Lane to a rose garden across the way. As a penalty, it was ordered that the flower had to be given every year to the Lord Mayor by way of ‘rent’.
This morning I joined the annual ceremony where a single red rose is cut from the garden and carried on a cushion in a procession to Mansion House. The footbridge may have long since disappeared but each year the Lord Mayor still gets this peppercorn rent payment thanks to the ritual organised by the Company of Watermen and Lightmen of the River Thames. 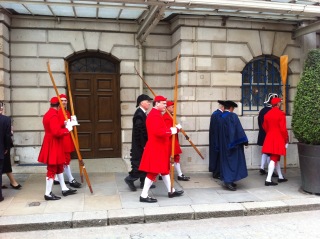 Against a backdrop of shiny modern office buildings, the red rose attracted a lot of attention today from office workers rushing from meetings and bemused tourists alike. Few probably had a clue what was going on as members of the Company of Watermen and Lightmen, dressed in traditional red outfits and carrying wooden oars, watched attentively over the flower. 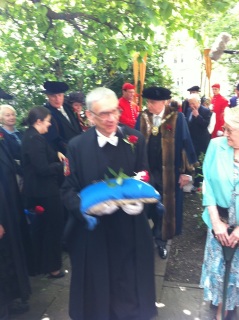 But why did Mrs Knollys want / need a footbridge to cross the road to reach her rose garden anyway? While her husband, leading citizen Sir John Knollys, was away fighting abroad she is said to have become annoyed with dusting blowing from a property opposite. So she bought it and turned it into rose garden. London roads were muddy so she built the footbridge as well and so her troubles began.

What I witnessed today just goes to show that while the fabric of the old City may have changed it still has a beating Medieval heart. Boris Johnson has control over Greater London but there is still a Lord Mayor elected annually. Guilds may not have the monopolistic powers they once had on all aspects of commercial life, from setting prices to deciding who can trade in the City, but they still meet in their halls. Some are even reporting growing memberships. The street layout in London is Medieval. You just sometimes need an imagination to relieve it and understand it.