During the years of communist dictatorship in East Germany, the government headquarters, foreign ministry, and the headquarters of the Socialist Unity Party (SED) were all located in the vicinity of Schlossplatz in East Berlin.

As official celebrations were held on October 7th 1989 to mark the 40th anniversary of the founding of the German Democratic Republic (GDR), thousands demonstrated outside the Palace of Republic. On October 24th, crowds returned here to demand the resignation of Egon Krenz who had recently been appointed the GDR’s new leader.

But following the opening of the Berlin Wall, 30 years ago last Saturday, the first and only democratic elections in GDR history were held on March 18th 1990. Parties pledging rapid unification won over 75% of all votes cast and a new, freely-elected parliament was held at the Palace of the Republic. The election marked the demise of the SED, with the eastern branch of Helmut Kohl’s Christian Democratic Union (CDU) doing particularly well. 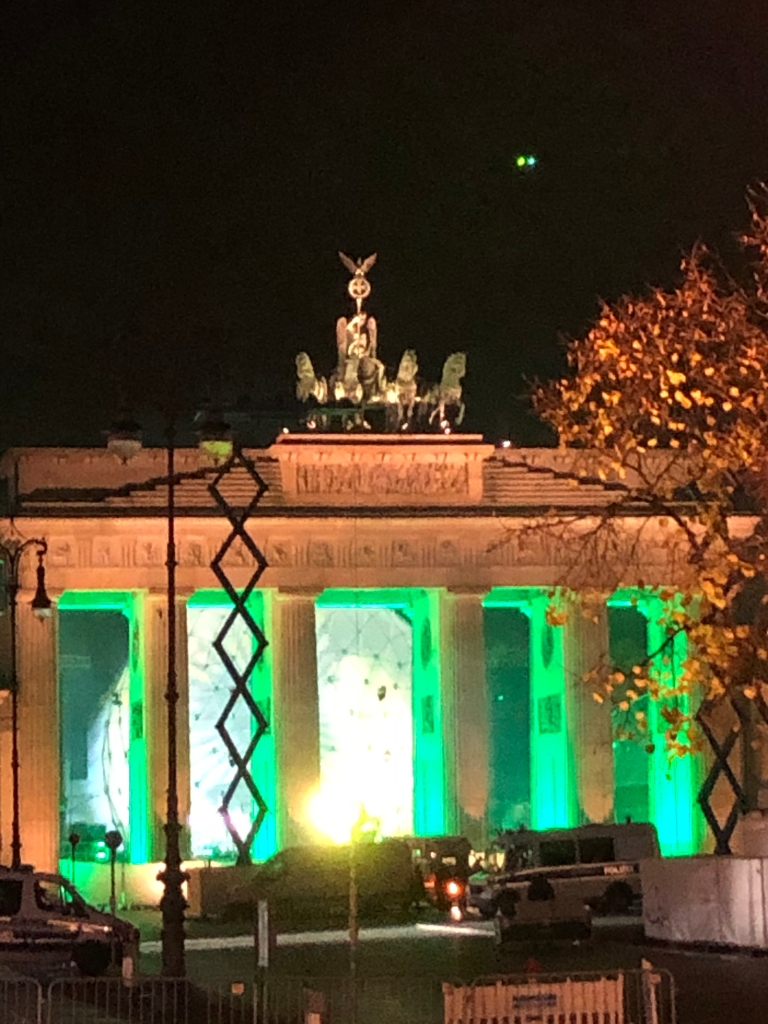 Not all in the West were in favour of swift re-unification. Recently released British Foreign and Commonwealth Office files reveal that US became concerned about the poor relationship between the British prime minister Margaret Thatcher and the West German chancellor Helmut Kohl. Robert Zoellick, head of the US delegation, described the language the leaders used for each other as “very distressing and embarrassing.” Thatcher believed that the reunification process should take 10 to 15 years and worried about an overbearing united Germany.

In the event reunification was completed quickly following the March 1990 elections. The currency union, with East Germany getting the Deutschmark, was completed on July 1st 1990. And reunification took place on October 3rd 1990, which was marked by a ceremony and fireworks at the Reichtag. Kohl took his place in history as Germany’s re-unification Chancellor.

Many in Germany worried about reunification and thought that the GDR would be better remaining a separate, reformed country. Egon Krenz, who took power on October 18th 1989 as the leader of the SED, says he felt abandoned by the Soviet Union. In a recent interview he said that the Soviet leader Mikhail Gorbachev had told him on November 1st – just eight days before the Berlin Wall was opened – that “German reunification is not on the agenda”. But Krenz believes that there had been secret talks with the West German chancellor’s office about “how it would pay the Soviet Union if it approved reunification” for some time. He claimed that the East German economy was “at least on a par with that of Spain, Italy or Portugal” at the time.

Many believed that that re-unification was actually annexation of the East Germany by the West and that they have been classed as second-class citizens. It’s resentment towards the West that continues to divide Germany 30 years on from the fall of the Berlin Wall.

In the late 1990s Germany’s economy collapsed and the country was branded the sick man of Europe. The CDU, under Helmut Kohl, was ousted in federal elections in 1999 as a punishment for rising unemployment. Kohl was succeeded as chancellor by Gerard Schroeder of the Social Democratic Party (SDP).

There were some particularly stark differences between the former East and West Germany. As the 10th anniversary of the fall of Berlin Wall was commemorated in 1999, it was recorded that unemployment was twice as high on the eastern side of the country (before the collapse of the GDR, there had been full employment in East Germany under socialism).

In Berlin, a scandal brought down the Senate’s grand coalition of the CDU and SDP, which had been in government since 1990. Following city elections in 2001, the SPD (winning 29.7% of the vote, against the CDU’s 23.8%), formed a ruling coalition with the PDS (successor to the SED communist party), which had achieved 22.6% of the vote (47.6% in former East Berlin).

By 2005 – when Angela Merkel became the first Easterner to hold the chancellorship – the German economy had recovered. The country prospered on the back of manufacturing cars for America and the Far East in a world awash with credit. As the world economy struggled in 2008, Germany’s recession only lasted a year and it continued to invest in industry, which left it poised to reap opportunities when things recovered.

Things were looking good for Germany and Merkel, who in April 2015 had an approval rating of 75%, which was particularly high given the length of time that she had been in office. But in the August of that year she made a decision to welcome to Germany refugees fleeing violent conflict in Syria, Iran, Afghanistan, and who had arrived in Northern Europe on often perilous journeys by land and sea. “Germany is a strong country…. We have achieved so much. We can handle it.” It was a decision that would change the country’s political landscape.

Between 2015 and 2016 more than one million refugees arrived in Germany and there were reports that the authorities were struggling to cope with the numbers. There followed several high-profile incidents, including sexual harassment in Cologne by young men of Arab or North African origin on New Year’s Eve 2015 and a terror attack at Berlin’s Christmas Market by a failed asylum seeker in December 2016, that stirred up xenophobic hatred across the country. From a political point of view, Merkel’s immigration policy triggered the AfD – which had been founded as a pro-free market, anti-welfare, EU-critical, anti-Greek bailout party – to move further to the right and bring to the fore the divisions that had existed since re-unification. It won 12.6% of the vote in federal elections in 2017, making it the country’s third most popular party, and entered the Bundestag for first time.

The AfD came second in elections in the eastern states of Saxony and Brandenburg this September. And just last month, in the state of Thuringia, Angela Merkel’s CDU, which had won every previous election here since re-unification in 1990 were pushed into third place. The AfD doubled its support from the last vote to come second, beaten only by the Left party. The local leader of the AfD in Thuringia, Bjorn Hoke, runs the party’s hard-right faction, and has been criticised for borrowing terms, such as Lebensraum and Volksverderber (corruptors of the people), from Adolph Hitler.

In eastern Germany, the AfD campaigns with the slogan “vollende die wende” (complete the revolution), suggesting that the fall of the Berlin Wall did not go far enough in bringing parity across the country. The party today exploits the differences in the economies that continue to exist in the two halves of the country.

Some two trillion euros has been transferred from the West to East since the fall of the GDR, but the eastern states still remain less prosperous. Today, unemployment is higher in eastern states – in August this year it stood at 6.5%, compared with 4.8% in the West. None of the 30 companies listed on the blue-chip DAX index at the Frankfurt stock exchange have their headquarters in the former GDR. Merkel grew up in the GDR, but aside from her only one other person in the cabinet grew up in the former East.

The German government published a report on the state of unity in September, which included a survey stating that 57% of Germans in eastern states felt like second-class citizens and only 38% believe that reunification has been a success.

Gregor Gysi, former GDR leader and now an MP for the Left party, says the rise of the far-right stems from the fact that “East Germans felt themselves to be second-class Germans during reunification. This means there are some who try to make migrants third-class citizens, because they don’t want to be at the bottom of the pile themselves.”

Given the economic differences between the two halves of the country, you would have expected those voting for the AfD in the East to be out of work. But this doesn’t seem to be the case – the party’s supporters are typically male and older people. They typically vote for the AfD for psychological reasons, rather than economic ones.

The Left Party also polls well in the East by emphasising Ostalgia, the widespread yearning for the simplicity of life under communist rule. “There was a completely different sense of solidarity,” Gysi said of life before re-unifications. “Even if there were a lot of Stasi informants, the people were friendlier, more united. They helped each other out.”

Neues Deutschland, the paper that was once the mouthpiece of the SED, is still being produced and has a readership of 25,000. It carried nothing about the Berlin Wall the day after it fell and even two days on there was only a small story with a bland headline: “Lots of traffic at the border crossing”.

“They don’t wish the GDR back in the way it was, and they mean that,” current editor Wolfgang Hübner said of his readers recently. “There is a widespread feeling that things went wrong. But they also think that there were some basic ideas [underpinning the Socialist system] that should be back on the agenda. People say: the GDR never took part in a war. There were no homeless. There was no unemployment.”

The unemployment rate has improved considerably in the three decades since the Berlin Wall fell, but is still a third higher in the East than in the West. Over the same time period, average incomes in east Germany have risen from 50 per cent of those in the west to 82 per cent today. But the differences continue to be felt and exploited.

Ever since the fall of the Berlin Wall, there have been major commemorations every five years to mark the moment that it was toppled. This year the main celebrations involved the spectacular concert in front of Brandenburg Gate, which I attended.

Anniversary commemorations in Berlin draw in visitors from all over the world, providing a vital boost for city tourism. The Cold War was global and so it is right that the fall of the Berlin War, an important event in the thawing of relations between East and West, is commemorated here for the benefit of the international community.

In one of the Bundestag’s commissions of enquiry on East Germany in the 1990s it concluded that “historical days of remembrance offer an occasion to have debates about the historical self-image of the nation.” It added that “symbolic and protocol ceremonies particularly on historically important anniversaries are… necessary in a democratic state….” Given a survey showing that 40% of under 30s in Germany don’t know what happened on Nov 9th 1989 and another recording that less than half of Berliners know where the Wall had been, this Works is crucial.

Commemorating anniversaries is important. But given the divide and bitterness that exists in Germany following reunification, it will take a lot more than a concert on a cold November evening by Brandenburg Gate to bring this country together.