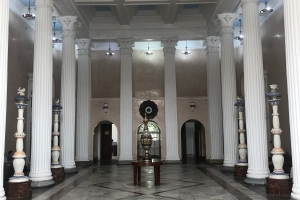 In a Soviet era sanatorium set in a sprawling park in western Georgia, elderly patients wander long marble corridors in white dressing gowns as they await their next treatment. Most are here to bathe in the radon-carbonate thermal springs in private bathtubs and enjoy a hydro massage whereby […]

Outside Georgia’s parliament building in Tbilisi a handful of protesters sit in small tents planning their next move. “We will not surrender,” reads a placard written in English nearby. Faced with what they perceive as aggression from Russia, the protesters in the Georgian capital were standing their ground […]