Why is it that in such a bustling city as London, do we, Londoners, and visitors alike make such an effort to get out to discover the ‘undiscovered’ and ‘unseen’?

Thousands of us take the Tube and visit Underground stations every day, yet tours of so-called ‘ghost’ (disused) stations quickly sell out.

Newspapers like the Evening Standard are full of events that Londoners can enjoy during their free time, but if you look in any bookshop you’ll find the ‘London’ section lined with volumes on walks and guides charting the supposedly ‘hidden’ areas of the capital.

It all comes down to the fact that we are humans and have a natural curiosity to want to go ‘behind the scenes’. We know there’s plenty already going on, but still sign up for email alerts highlighting endless other things that are taking place in London.

And even when there’s no officially organised ‘group’ activity, you can easily make your own arrangements.

With a group of friends, I recently set out on a walk tracing the lost river Tyburn from its source in Hampstead to where it flows into the Thames at Pimlico. 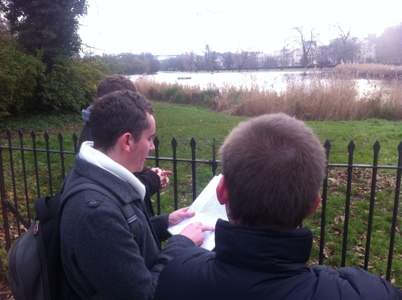 For the most part, the river is now out of sight. After excessive development over the past two centuries, it’s buried under roads and buildings, and so largely forgotten about. Plaques along the route provide the biggest clues to its existence.

But there’s still something fascinating about being able to track the river’s route. You can see how it has influenced the design of roads, like the curving lines of what is now Marylebone Lane. The names Conduit Street and Bond Street in the West End relate to the time when a conduit flowed off the river to provide water to people living in Cheapside.

Elsewhere, it’s fascinating to see how the Tyburn is carried through bridges and viaducts, for example Charlbert Bridge over Regent’s Canal and a structure (on the Circle Line platform) in Baker Street Underground Station.

While later on in the walk the river is very hard to trace on maps (particularly in Oxford Street and Green Park), it was actually discovered in the 1970s running through the basement of Gray’s Antiques in Davies. Street. The owners have developed it into a water feature, complete with bridges.

We also had a lot of fun lying down in the middle roads and listening to the trickle of water through drain covers (with someone keeping an eye out for traffic, of course).

But what appealed to me most about the walk though is that we visited parts of London that seem too obvious to make a special journey to visit at the weekend. I often go to meetings in Mayfair during the week, so why would I want to visit during the weekend? But the trip was highly rewarding – seeing brightly-lit Christmas decorations, stopping for pints in cosy pubs and window shopping for things that I could never afford!

And by walking the route of the river Tyburn, you are tracing London’s history. Two hundred years ago its course would have passed through villages, like Tyburn (now by Marble Arch, and once where the infamous Tyburn Tree Gallows were sited), and open land. How different it is today.

Despite a slightly disappointing end point at the Thames (where it flows into the river was locked away behind gates when we visited), it’s a very fulfilling experience re-discovering London.