Maritime and Greenwich are two words that often go hand in hand. And given the area’s sea-faring past it’s not hard to see why.

Within reach of Greenwich, dockyards were created more than 500 years ago that quite literally built the modern Navy. This was also where for many years there was a famous Royal hospital for veteran sailors and later the home of the Navy’s main training college.

All of this may be important, but what fascinates me about Greenwich is that it was where Henry VII built a fine home for himself. The land on which it was built was in the possession of the Crown from 1433. There’s a wonderful model in the Discover Greenwich exhibition centre showing what the palace, formed of three courtyards behind the main river frontage, would have been like in Tudor times. 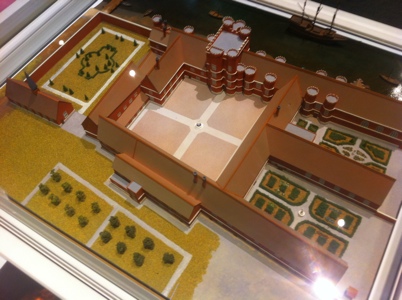 Greenwich Palace, six miles from central London, was a particularly special place for the Henry VIII – he was born here and, by all accounts loved the place. He added a tiltyard for jousting, together with an armoury, kennels, stables, tennis courts and a cock pit.

It was Henry’s VIII’s decision to establish his Royal dockyards at nearby Deptford and Woolwich that cemented the area’s importance and was why the Tudor Palace rose in prominence.

Walking through the gallery at Discover Greenwich you can see some of the major archaeological discoveries from the Tudor Palace in recent years. More than 30 excavated objects are on display, including items from the splendid Chapel Royal which was discovered in 2005 and was where Henry VIII married Anne of Cleves. The Tudor tiled floor (only known surviving floor of a Royal Tudor Chapel) has been recreated for visitors, so they can see the colours.

The Greenwich Palace that Henry VIII lived in must have been an opulent place with interiors consisting of sold gold, gold leaf and even cloth of gold. It’s said the Royal apartments were especially elaborate.

We have this wonderful account of the festivities at Greenwich Palace during Christmas 1516:

“On the day of the Epiphany at night, the King with eleven others, were disguised after the manner of Italy, called a mask: a thing not seen before in England. They were apparelled in garments long and broad, wrought all with gold, with visors and caps of gold. And after the banquet was done, these maskers came in, with six gentlemen disguised in silk bearing staff torches, and desired the ladies to dance. Some were content and some, that knew the fashion of it, refused, because it was not a thing commonly seen. And after they danced and commoned together, as the fashion of the mask is, they took their leave and departed, and so did the Queen and all the ladies.”

And while Greenwich Place was loved by Elizabeth I, it was then largely neglected until James I commissioned Inigo Jones to build the Queen’s House for his wife, Anne of Denmark, although sadly she died in 1619 before it was finished. It’s described as the first classical domestic house in England and was inspired by the Italian villas of Andrea Palladio.

The Tudor palace, which stretched down to the Thames, has vanished with little trace (following a period of little use and subsequent Civil War damage what remained was largely pulled down in the 1660s), but the Queen’s House stands in full glory for visitors to see and explore.

You walk in through the cube-shaped Great Hall, with its marble floor, carved wooden balustrade and wonderful paintings on the ceiling. An open-welled spiralling stone ‘Tulip’ staircase, seen as highly innovative when it was introduced, leads to a skylight in the roof.

Greenwich Park makes a wonderful back-drop for the Queen’s House and from the windows on the upper floors you can take in the splendid views of the Old Royal Observatory, built by Charles II, in the distance. It’s now part of the National Maritime Museum and houses maritime-themed art.

By the time the Queen’s House was nearing completion in 1635 Charles I was on the throne. But his wife, Henrietta Maria, didn’t get to enjoy it as she was driven into exile in France as a result of her husband’s action.

While Charles I was, of course, beheaded, following the Restoration of the monarchy under Charles II Henrietta Maria enjoyed, as Queen Mother, a spell in what she called her ‘house of delight’.

Charles II had ambitious plans to re-build the derelict Tudor Palace on the scale of that he’d seen at Versailles in France, but his project failed miserably as he ran out of money and the country was hit by the Great Plague. Only what would become known as the ‘King’s House’ was partly finished – it was later incorporated into Greenwich Hospital.

When Henrietta Maria, Charles II’s mother, returned to France before her death in 1669 the last Royal to permanently live at Greenwich had left. Queen’s House was granted to the Royal Naval Asylum in 1805 (which eventually became part of the Royal Hospital School) and it was acquired for the National Maritime Museum in 1934. As I’ll discuss in my next blog on Greenwich, Greenwich Hospital was built on the footprint of the Tudor palace.

But while that great structure that Henry VIII and Elizabeth I would have known and loved has disappeared, there’s still enough evidence to on display to take you back to Tudor times. And while kings or queen no longer live in Greenwich, the Royal links have been maintained – the borough became Royal Greenwich in 2012.