Shard ushers in Rotherhithe’s next chapter

Like other areas of London, Rotherhithe’s population exploded in the 1800s; growing from close to 10,000 people in 1801 to some 38,000 a century later. Workers flooded into the area as new docks were dug and warehouses built, creating employment for an army of dockers.

By the mid-1820s the eastern side of the peninsula consisted of a vast network of eight docks, owned by three different dock companies. Ships laden with goods as diverse as timber, hemp, corn, iron and tar from America and Northern Europe, were unloaded on the busy quays.

It must have been a real ‘sailor’s town’, dominated by employees of the East India Company who enjoyed many of the riverside pubs that are still popular with visitors today. There was some smart housing, but equally there was some not so good housing.

But Rotherhithe’s sea faring traditions went back a lot further than the 19th century, after all it was from here that the Pilgrim Fathers set sail from on their pioneering voyage to Massachusetts in 1620 on the board the ship, the Mayflower. The location is today remembered by the wonderful Mayflower pub.

And it’s said that timbers from this and other vessels are contained in a range of buildings in the Rotherhithe area. That’s because oak was not allowed to be used in new-builds, hence the need to recycle old wood from ships when they returned from voyages.

There were at least 12 major shipyards in Rotherhithe, as well as shipbreaking. One of the latter was occupied by John Beatson who broke up the Temeraire, a veteran of the Battle of Trafalgar. Some of the ship’s timbers went to make up two bishops’ chairs and a communion table for St Paul’s Church off Rotherhithe Street and are now in St Mary’s Church.

The name Rotherhithe means ‘landing place for cattle’ in Anglo Saxon. So from being a spot where cattle grazed so they could be fattened up, and thus command a higher price at market, this corner of south east London grew to be an important port.

When the last docks were closed to commercial traffic in the 1970s Rotherhithe’s place in history could have come to a bitter end. But it was fact the start on a new exciting chapter, as from the 1980s the area started to be redeveloped with former warehouses being converted into homes and new builds.

Riverside living at its best in Rotherhithe

Rotherhithe benefitted from the building boom that stretched across the water to Canary Wharf in the 1980s. And in the decades that followed took advantage of improvements in transport, such as the Jubilee line extension in 1999 and the opening of the Overground in 2010.

Walking around Rotherhithe today, it seems as if it’s about to take yet another leap forward. Just 10 minutes from the Shard, where 10,000 people will eventually work, you can see why property developers are getting enthusiastic about snapping up the few parcels of land that remain.

In fact, wherever you are in Rotherhithe it seems that you can always see the Shard – it’s this iconic structure that will define the area’s future, something I’ve written before in relation to London Bridge railway station.

One of key arrivals of the 1980s was that of the Daily Mail’s Harmsworth Quays print works. This 14 acre site has now been sold to British Land and, when the presses are re-located to Thurrock later this year, some 1,000 homes will be built.

The somewhat dreary Surrey Quays Shopping centre is also going to get a make-over and, in a sure sign that the middle classes have arrived, will get a John Lewis. 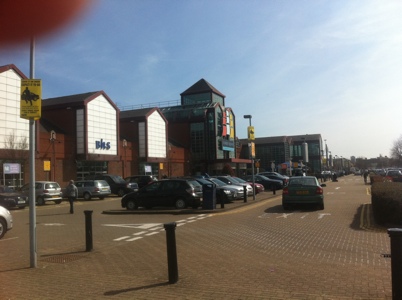 Surrey Quays shopping centre – getting a much-needed refurbishment (and a John Lewis!)

Rotherhithe is a pleasant place to explore on a spring afternoon – I enjoyed walking to the nature reserve at the weekend and climbing the mount to admire the view of the regenerate docks. And then there’s Surrey Docks City Farm at South Wharf, a real asset for an inner city area.

The area is going to get busy again thanks in part to the Shard development, but let’s hope with all the changes you can still get a spot by the bar at the Mayflower pub and enjoy some peace and quiet in one of the numerous cute little parks. 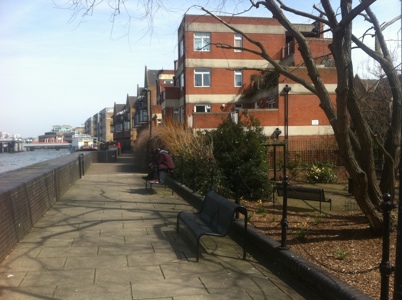 The Mayflower – one of London’s best riverside pubs 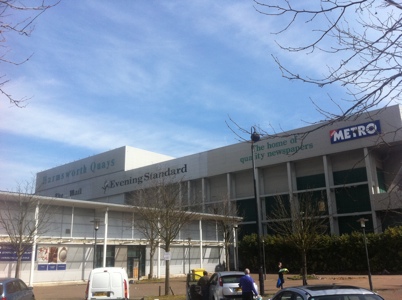 Daily Mail’s Harmsworth Quays – soon to be transformed into 1,000 homes