The re-development of Euston station is back on the agenda after George Osborne declared that the Sixties eyesore should be pulled down and rebuilt. Brand-new offices, apartments and a shopping centre could form part of the new plan, completed in time for arrival of High Speed 2. “I’m thinking that maybe we should go for a really big re-development of Euston,” he said in an interview. “There is a really big opportunity for jobs and for housing in the area. Let’s face it — Euston is not one of the prettiest of the London stations.”

Euston’s busy concourse – not a seat in sight

Knocking down Euston and building a new station from scratch couldn’t come soon enough. While neighbouring terminals King’s Cross and St Pancras are airy, stylish and bright, it’s a dingy monstrosity. Richard Morrison, writing for The Times, spoke for many Londoners by stating that “even by the bleak standards of Sixties architecture, Euston is one of the nastiest concrete boxes in London: devoid of any decorative merit seemingly concocted to induce maximum angst among passengers; and a blight on surrounding streets. The design should never have left the drawing-board — if, indeed, it was ever on a drawing-board. It gives the impression of having been scribbled on the back of a soiled paper bag by a thuggish android with a grudge against humanity and a vampiric loathing of sunlight.”

The original Euston terminal, built by William Cubitt for the London and Birmingham Railway on farmland, was opened in 1837. It was the first inter-city railway station in the capital and at first it had just two platforms – one for arrivals and one for departures. The architect Philip Hardwick also built a distinctive structure, which became known as Euston Arch, marking a spectacular entrance to the station. Interestingly, until 1844 trains were pulled up the incline to Camden Town by cables because using locomotives was prohibited in the Euston area.

Euston was greatly expanded with the construction of the spectacular Great Hall in 1849, which the architect Philip Charles Hardwick (son of Philip Hardwick) “succeeded in making one of the noblest interiors in London,” according to The Daily News, published the day after the extension opened. It featured a grand curved staircase, sculptures of Britannia and Mercury, eight allegorical statues representing the cities served by the line, and white imitation marble columns supporting a ceiling with lavish blue decorations. It would have looked more like an art gallery than a station. The Daily News described the interior:

“The entire structure, therefore, consists of a central hall, with on either side, booking-offices and every possible convenience for passengers; and in upper stories the magnificent shareholders’ meeting room, board room, secretaries’ room, clerks’ offices….. The exterior of the structure has no very striking pretensions, it is of the plain Roman style of architecture, and is 220 feet long by 168 feet wide. At the southern front there are five entrances, over which extends for a considerable distance from the face of the building a capacious awning, under which carriages may draw up and passengers alight without exposure to wet or any other inclemency of weather.”

The impressive Great Hall at Euston – demolished in the 1960s

But by the 1930s the station was extremely congested and there was a clamour by the London, Midland and Scottish Railway to rebuild it. Re-development plans were shelved with the advent of World War Two, only to re-surface again with full force in the 1960s. In what has been described by the Royal Institute of British Architects as “one of the greatest acts of Post-War architectural vandalism in Britain” the Great Hall and the Arch were demolished amid much public outcry.

Euston Arch before it was demolished

As a result of the works, little of the Victorian station survives bar a number of re-housed statues and the two lodges on Euston Road (now trading as cosy drinking venues at the front of the station forecourt – the Euston Tap (specialising in ales) and the Cider Tap (specialising in ciders). In addition the National Railway Museum houses an 1846 turntable, entrance gates and a few select relics from the Great Hall. But the rest was all wiped out with the new building.

Euston Tap – one of the last reminders of the Victorian station

The opening of the new Euston in 1968 followed on from the electrification of the West Coast Main Line. The Chairman and General Manager of London Midland Region of British Rail set out the objectives of the station in a brochure published to mark its opening:

“The new station has been planned with the comfort and convenience of travelling public as its primary objective consistent with modern design and will, I am sure, prove a worthy terminal to the great electrification and modernisation scheme which has revolutionised travel between London, the Midlands and the North West.”

In some ways, it was ahead of its time, and did live up to the bold claim of offering “the most modem rail terminal to be found anywhere.” It boasted an underground car park, meaning that the station forecourt wouldn’t become congested with private vehicles. In addition, the specially designed depot reduced congestion on passenger platforms (where they had previously been dispatched from), providing passengers with “unrestricted movement in the station precincts.”

Reading the 1968 brochure, the station sounds very consumer friendly with “all the usual amenities and facilities of a modem rail terminal and some new ones too, have been grouped together within easy reach of the travelling public.” It discusses the range of shops and catering services provided for passengers, but reserves its biggest excitement for the facilities on its upper level:

“On the first floor above the concourse are further facilities designed to provide the daytime comfort and convenience of a first class hotel. These facilities include a waiting lounge, grill room and snack bar, a licensed bar, a party catering room and high-class toilets with showers and baths. This area is entered from the concourse by a staircase between the entrance to the lounge bar and Sprig Buffet waiting area.” Today the upper level is home to a tatty pub.

The brochure also provided a considerable amount of praise for a new Travel Centre on the west side of the concourse, describing it as “an entirely new concept in passenger facilities.” Situated today where there are banks of self-service ticket machines it had “all the facilities needed to deal with passengers’ requirements, such as ticket sales, enquiries, and reservations. The grouping of these various services has been designed to make rail travel arrangements simple and convenient.” There was even a “comprehensive hotel reservation service.”

The reality is that 45 years on Euston station is shabby, while the bus stops on the forecourt and underground car park are gloomy. Catering on the main concourse is limited to fast food outlets like Burger King and Harry Ramsdens’. There are no seats, so passengers waiting for their trains are forced to sit on their luggage in front of the main indicator boards before they make a scramble when their platform is announced (“It was planned to accommodate, without crowding or congestion, the maximum number of passengers likely to use the station at peak periods,” according to the 1968 brochure).

Buses pool out of the gloomy and shabby Euston bus station

But the real tragedy is that the developers knocked down the splendid 19th century building, rather than incorporating it into a new design as has been the case at King’s Cross. Building a new station therefore provides the opportunity to create a spectacular new terminal that will serve London for many years to come. This time developers must get the design right.

MORE DETAILS: Euston’s proposed masterplan reveals how the station could be rebuilt with an open plaza and a new Euston Arch. 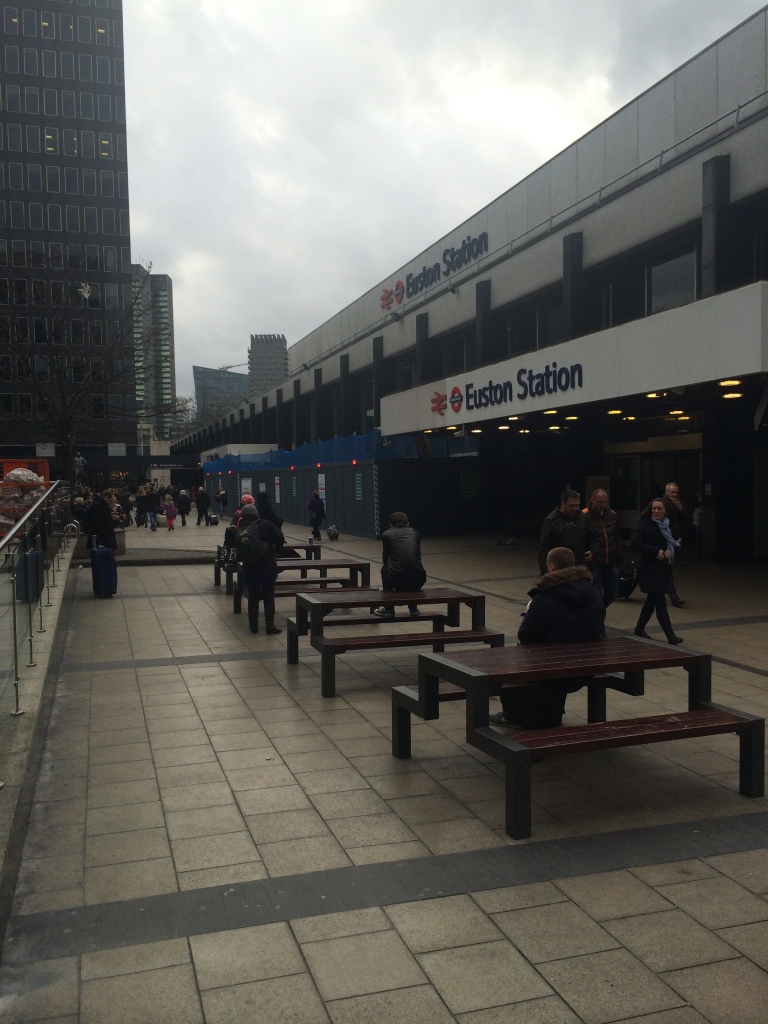