London was once surrounded by the vast palaces and estates of senior clergymen from across Britain. On land now lying in Zone Two and built up with homes, shops and offices,  bishops could until enjoy all the pleasures of being in the countryside whilst having an important base close to the power centres of the City and Westminster. The Bishops of Ely had their London residence on a portion of land near today’s Holborn Circus, to the west of Farringdon, from 1290. Ely Place in the 16th century

Shakespeare refers to the palace, with its pleasure grounds, in Richard III play and records the lines delivered by the Duke of Gloucester: ” My Lord of Ely, when I was last in Holborn, I saw good strawberries in your garden there; I do beseech you, send for some of them.” And H W Brewer captures the extent of the site in the 16th century in a vivid painting. But another picture, from 1772 – the year that the Bishops sold the land to the Crown, shows that many of the buildings to be lying in ruins.

The contrasting fortunes for the Bishop of Ely’s land from the late 18th century, as it was divided up and developed, makes for an interesting study. Only brick walls provided a physical and social barriers separating lives that couldn’t be more dissimilar.

On part of the medieval palace site, builder and surveyor Mr Cole built splendid terraced houses in the 1770s in a secluded cul-de-sac accessed from High Holborn. For those that could afford them, the properties in Ely Place provided modern spacious accommodation that was within reach of the City. The houses, which are well-preserved and set behind imposing black gates, were guarded by men in top hats and frocks until the 1980s.

The only surviving part of the medieval Ely Palace is the chapel of St Etheldreda – part of the oldest Catholic church in England. Dating from 1290, it is one of the few examples of Edward I era architecture to remain intact in London. If you are passing and it’s open, it’s well worth popping to have a look around. The extensive west window, finished in 1964, commemorates Tudor martyrs. The chapel itself only survived the Reformation because it was converted into a Protestant place of worship. And during the Great Fire of London it became dangerously close to being destroyed.

Given the opulence of Ely Place, it may surprise some to realise that on another portion of the Bishop of Ely’s medieval land, one of London’s most notorious slums developed. Crammed on the western side of the river Fleet, destitute people lived in appalling conditions. Many believe that Charles Dickens, who wrote vividly about the overcrowded, unhygienic alleyways and courts, set Fagin’s den here in the novel Oliver Twist.

Thomas Beames, who I’m following in the footsteps of for a series of blogs on the capital’s 19th century slums , also visited Saffron Hill (now a fairly uninteresting back street) for his 1852 publication, the Rookeries of London and found that the courts were “the lurking places for thieves” and “low characters”. Geographically speaking, the Saffron Hill Rookery was bordered by Ely Place in the west, in the south by Holborn Hill (now High Holborn) and in the north and east by Clerkenwell. The Fleet Ditch flowing through the centre of the district contributed to bringing this district downhill and Beames notes that “though its dark and rapid stream was concealed by the houses built on each side, its current swept away at once into the Thames whatever was thrown into it.” The clergyman’s description of the drunken debauchery in the district, where absent parents resulted in their children turning to crime, reads just like an episode from Oliver Twist:

“These thieves are often the children of honest, though drunken and debauched parents, father and mother spending their earnings, and devoting their spare time to the public house; their children have become the easy prey of the villains who lurk in the neighbourhood; soon do they learn, in thieves’ training houses, the jugglery of their trade, and apt pupils do they become. Even if they were sober, the inhabitants of Rookeries cannot take care of their children,-they are too much from home; the children are allowed to run about, without any one to take care of them, or, if even sent to school, are not quite out of the reach of temptation; and what influence must the example of a thieves’ quarter have upon them all. With such a neighbourhood are connected the lowest prostitutes and the worst public houses – for in these two species of enjoyment, the unhallowed gains of felons are wasted, scattered profusely, rather than spent,- these different species of intoxication, the lures which wed them to their infamous calling.”

Elsewhere in the Saffron Hill Rookery district Beames noted “there was all the courtesy and warmth of heart about these poverty stricken tenants.” In one home he found women sitting around playing with their children while men cooked potatoes. There were no tables or chairs in some of the rooms, blackened with soot, that he visited; clothes were hanging on lines, bedclothes were left in heaps and so tight were tenants for space that children were forced to sleep on onions. When Beames questioned how 17 people could sleep in a small room, he was told by one of the tenants that they operate on shifts. Beames had warm words to say about the place:

“Their welcome to us rung cheeringly on our ears, and the salute which they gave us as we left, was full of warmth, and in a style which would not have disgraced noble blood….. Children seemed, if we may judge by the number we saw, to thrive there, and to be fondled with an affection, the want of which renders many mansions desolate. You could not but grieve, that so much kindness and courtesy should be neutralised by wretchedness,-and that these poor creatures should live in the neighbourhood of the worst thieves and lowest prostitutes of London.”

Saffron Hill was also the site of the first Ragged School in London which Beames said had 100 beds in “a large, lofty, and airy apartment and “are provided for those pupils who are houseless; and baths and other comforts are attached to the establishment.” From what started out as a single schoolroom in this district in 1841, just a decade later there were 110 Ragged Schools in the capital, teaching trades to some 2,000 children.

But Beames believed that the conditions of those living in Rookeries was not going to be drastically improved “until the subject of dwellings for the poorer classes really engages the attention of our Rulers.” He mentioned that the City authorities had formed a plan to build a street to connect Farringdon Street with Clerkenwell, but it was stopped after they struggled to buy houses in their way. Beames was supportive of the City’s plan:

“If this wholesale clearance answered its end, other landlords would be tempted to build better houses in the place of the present dens, courts, and alleys. It would be letting light upon Pluto’s gloomy dominions, the astonished ghosts would vanish at the unexpected sight, and the spirits of pestilence, hunger, crime, and despair, betake themselves to Rookeries yet unexplored.”

Farringdon Road, the link that Beames wrote about, would not be completed until the 1860s and represented one of the greatest urban engineering achievements of the 19th century in that it buried the River Fleet, helping to solve sanitary problems.

Back at Ely Place, I head down a narrow lane between Numbers 9 and 10 to reach the Olde Mitre, a charming tavern in Ely Court dating from 1546 (it can also be accessed from Hatton Garden). It was founded to serve the staff of neighbouring Ely Palace and, until the 1980s, had its operating hours decided by magistrates in Ely, Cambridgeshire. There’s a cherry tree preserved in the pub which some say that Elizabeth I danced around. Whether or not that tale is correct, the Old Mitre is a great place to ponder on the interesting and varied legacy of the Ely Palace site. 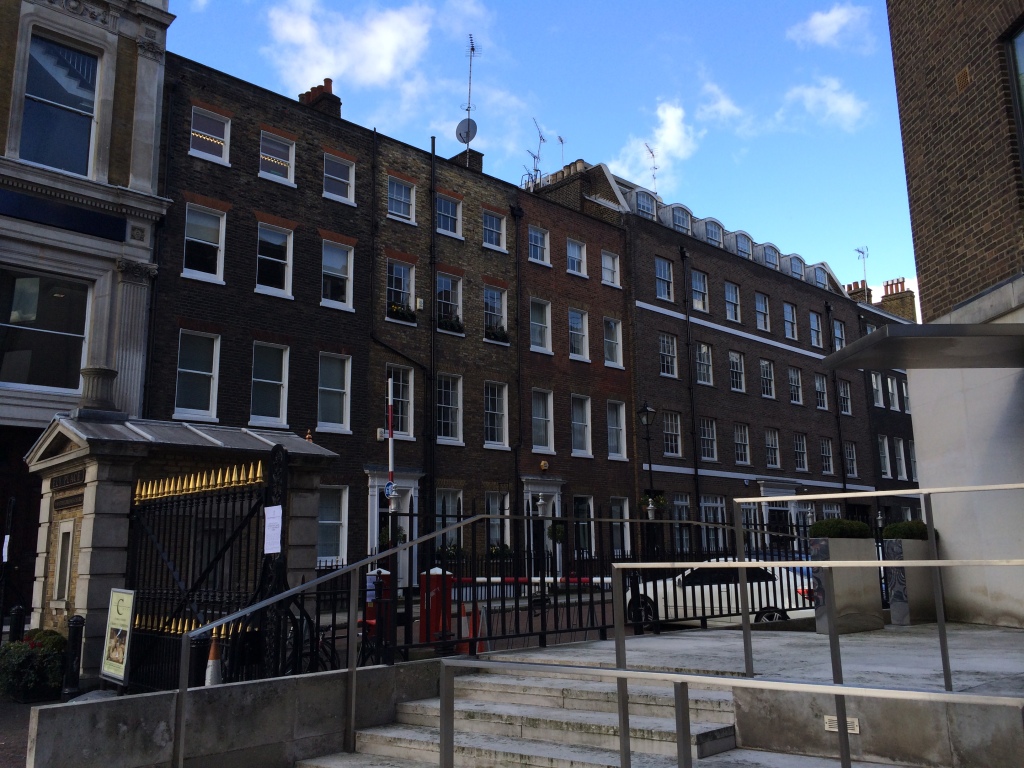