William Blake’s reference to ‘dark satanic mills’ in his Jerusalem poem, conjures up negative connotations of the industrial revolution and the impact it had on the lives of ordinary people. Workers toiled away for long hours in dirty factories, with little time for leisure, contemporary commentators suggested. Machines controlled employees’ daily lives and destroyed family life. And there were clear winners and losers – the owners of factories and the workers respectively. This was capitalism at its very worst.

Aside from Blake’s poem (which some say wasn’t even referring to the industrial revolution at all, but instead the Orthodox churches of the establishment), there’s a plethora of literature and journalism describing life for so-called ordinary people in the 19th century. Perhaps best known was the work of Frederich Engels who drew on two years’ observation of living conditions in Manchester in the early 1840s to produce the left-leaning The Condition of the Working Class in England. Others, like Arnold Toynbee, who came up with the term “industrial revolution” in the 1880s (describing it as a “disastrous and terrible event”), highlighted how creating vast wealth for a few was leading to the masses being degraded.But was this negative take on the industrial revolution the reality for all?

I’ve just finished reading Emma Griffin’s excellent book Liberty’s Dawn: A People’s History of the Industrial Revolution, which has recently come out in paperback. While previous accounts of the period have been from contemporary writers (coming with their own agendas and prejudices) relying a narrow range of original sources and statistics, Griffin conducted a thorough analysis of 350 working class autobiographies. Surprisingly, while the authors wrote about many of the difficulties that life brought for them, they were in many cases quite upbeat. For some wages increased and there was more of a certainty of work as they moved from working in purely cottage-based industries and farms and into factories and bigger communities.

It was perhaps appropriate that I started reading Griffin’s account on my recent visit to the Derwent Valley (see my blog from last week) in Derbyshire as for historians this was where the factory-system and a new kind of industrial community was born. Walking around the former mill buildings and village in Cromford, it was clear that life would have been tough for many, but workers did have good quality housing. The fact that the late 18th century houses in North Street are still standing and lived in today is evidence that they were well-built.

Allotments behind North Street in Cromford

The top-floor of these properties had a number of windows so that the adult males in families had plenty of light so they could work as weavers while wives and children earned salaries in Arkwright’s mills nearby. Behind the properties were allotments allowing householders to grow their own fruit and vegetables. And at the end of North Street was a school, paid for by Arkwright (partly to fulfil obligations resulting from new factory and education Acts), providing the children who worked in his mills some form of education. 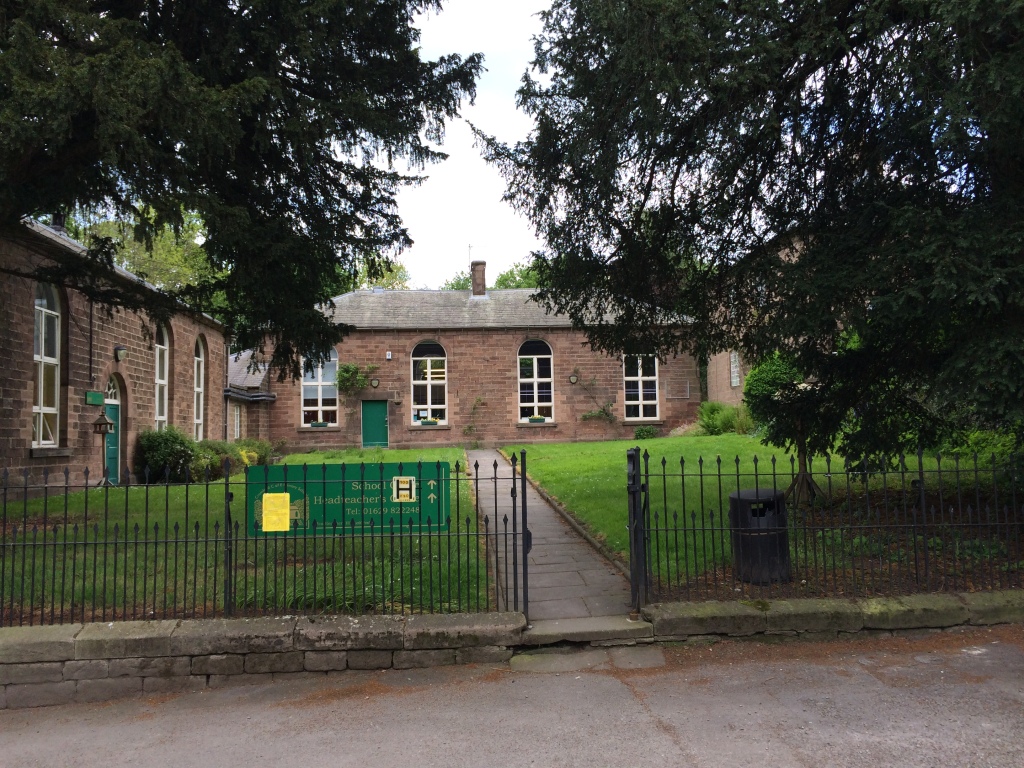 Long hours were a reality, but contemporary accounts suggest that Arkwright was a paternalistic employer. He provided a form of sick pay long before it was a statutory requirement, for example. Indeed his obituary published by the Derby Mercury Erasmus Darwin was very positive about the industrialist. His system of spinning “by giving perpetual employment to many thousand families has increased the population, and been productive of greater commercial advantages to the country, and contributed to more the general benefit of mankind, in so short a space of time, than any other single effort of human ingenuity.”

Griffin’s book also shares positive aspects of the life during the industrial revolution, while being realistic about the realities of industrial work. This new way of working brought more certainty of both the level and earnings. People writing in the autobiographies were largely positive comments about pay, as Griffin noted:

“The industrial revolution increased the amount of work available, for the skilled and unskilled, for the young and old. More work. It may not sound exciting, but for those suffering from chronic unemployment, a full-time job was a thing of enormous value. More work meant higher incomes, and for a family living close to the breadline this was very good news indeed.”

This shift also brought a plethora of new jobs including working in warehouses, repairing machines and keeping accounts i.e. beyond just making things. And outside the factory, the associated rise of larger communities also brought work opportunities, such as in shops and entertainment venues. Many benefitted from this effect of economies of scale.

In other professions, opportunities were opened up to wider society. For example Griffin found that in the early 19th century tailors and shoemakers were more likely to learn their skills outside costly apprenticeships. They therefore no longer needed to pay expensive premiums to employers and be tied to binding contracts, but could learn on the job.

Of course, it’s important not to generalise, a point that Griffin makes throughout her book. Experiences varied in different industries and in regions. And while for men, the industrial revolution brought new, better paid opportunities, the experiences of children and women was not as positive. Children started work at a much younger age, working in mines or using their nimble fingers to operate specific machines in factories. Women didn’t have better working experiences either, as Griffin notes:

“Despite all the economic upheavals that we know occurred between the late 18th and mid 19th centuries, the profile of women’s work hardly shifted at all. With the exception of the factory districts, which did offer a distinctive new form of employment, most women remained employed in the same old sectors, very often doing much the same work as their mothers and grandmothers.”

This point of variation is something that I’ve noted as I’ve visited other early industrial communities in Britain. For example, while Arkwright may have been seen as a paternalistic employer, not all were regarded as the same. Titus Salt, who built Saltaire on the outskirts Bradford, was a hard task master. Living conditions were much better than workers had experienced in the slums they left; but they paid for the privilege. And just as Salt kept all the rent, he also profited from the spending of all shops in the village that he owned. In reality, it’s not possible to have one view of the industrial revolution.