Entrepreneurs will tell you that to succeed in business the political environment needs to be right. For William Hesketh Lever, the son of a wholesale grocer from Bolton, the removal of tax on soap and the government’s desire to promote a clean living agenda amongst working classes created a unique opportunity. Sunlight Soap, the first product made by the manufacturer’s new firm Lever Brothers, not only brought enormous personal wealth but was also the beginnings of the company we now called Unilever.

With his brother James Darcy Lever (hence the company name) he leased a factory in Warrington and production began in 1886. The ingredients they used were of the highest quality, with no silicate of soda and more vegetable oil than tallow. Thanks partly to efficient marketing and sales – packs were branded with the Lever name from the start, orders flooded in from around the world. Little would the pair have known that what they started would grow into one of world’s biggest consumer goods companies.

Production quickly grew from 20 to 450 tons of soap, but it soon became apparent that it was not going to be possible to extend the Warrington factory and so a new site needed to be found. The firm opted to buy 24 acres of cheap, marshy ground on the Wirral peninsula which they called Port Sunlight (named because the land was conveniently near an offshoot of the River Mersey and also as a result of what they produced there) for the factory and a further 32 acres for the village.

But for Lever the Port Sunlight project was so much more than just about building a factory to handle a bulging order book. He had a social conscience and was determined to create decent housing and amenities for workers on the new site. Given the squalor and cramped living conditions that many would have faced in inner city slums moving to Port Sunlight was quite literally a breadth of fresh air. There had of course been attempts at creating quality accommodation for workers in the past, but this was the first time it was combined with the idea of a garden village. Lever set out his vision for the site at the ceremony of cutting the first sod for the new factory in 1888:

“It is my hope and my brother’s hope … to build houses in which our work-people will be able to live and be comfortable. Semi-detached houses, with gardens back and front, in which they will be able to know more about the science of life than they can in a back slum, and in which they will learn that there is more enjoyment in life than in the mere going to and returning from work, and looking to Saturday night to draw their wages.” 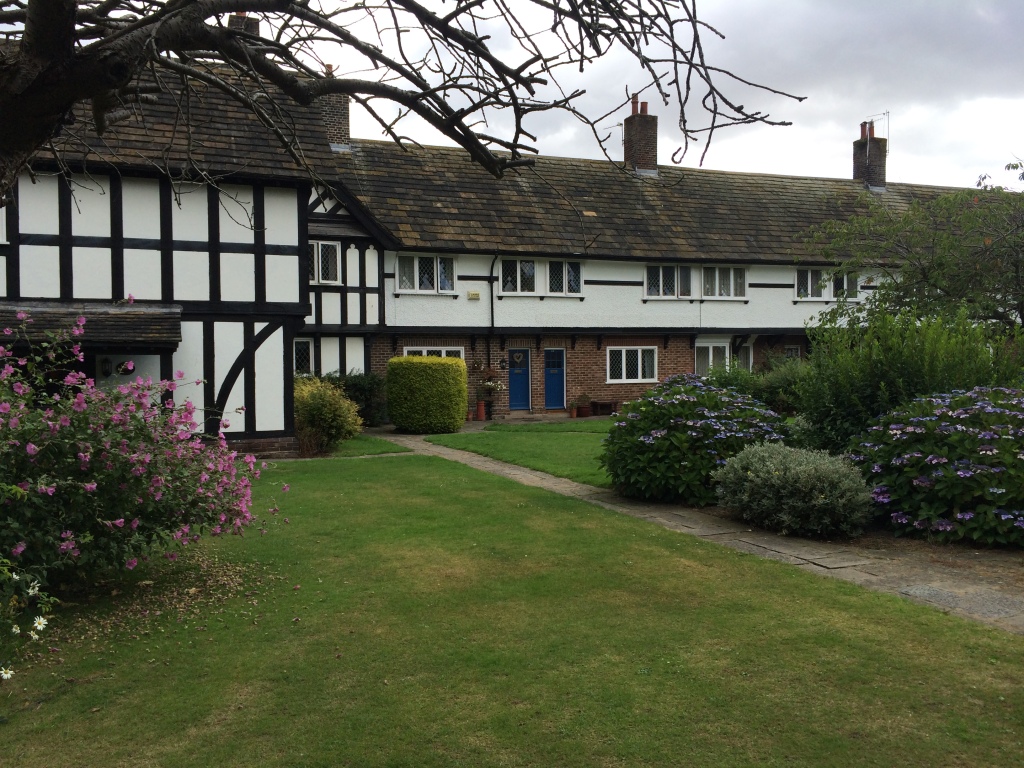 So as well as creating spacious homes surrounded by plenty of green space and gardens, Lever Brothers built places where workers could enjoy their leisure time. By 1909 there were 28 self-supporting clubs and societies in the village. And the site would grow to 130 acres with some 900 houses and nine public buildings, plus allotments and extensive parks (one of which had an amphitheatre with open air performances).

Arriving at Port Sunlight by train from Liverpool, 125 years after the first factory building was open, it’s just a short walk to the works entrance. Although no longer producing soap bars, Unilever does still manufacture liquids such as detergents here. Of course the commercial buildings have grown considerably since 1888 but the original office block remains – the boardroom in Liver House is meant to be particularly exquisite.

Across the road the Gladstone Theatre is today used by a local performance company (Grease the musical was advertised on one of the billboards when I passed). It was the first assembly and recreation hall on the site, and also served temporarily as canteen for male workers until that function was moved inside the main building. Lever said it was “the most appropriate Village Hall we have. It is simple and unpretentious, admirably adapted for the purpose for which it was designed, and most suitable and appropriate for erection in a village.”

The name for structure (it was originally Gladstone Hall) is particularly fitting as Gladstone, the British Prime Minister, was greatly respected by Lever, after all abolishing tax on soap and then paper made it possible for companies like his to make soap in large quantities and then advertise it effectively. “…no trade in the country owes so much to yourself as the industry we are engaged in,” said Lever at the opening of Gladstone Hall in 1891. “It was in April 1853 that you removed the duty on soap, and thereby made the manufacture on a large and scientific scale possible. It was in 1861 you removed the duty from paper, and so gave the country its greatest boon; a free and cheap Press. With a duty on paper, a cheap press was impossible, and therefore also a large circulation. Without a large circulation it would be useless to advertise.”

But this was about more than just business kick-backs. Lever shared many of Gladstone views on politics and he became a Liberal Member of Parliament from 1906 to 1909. In the commons he called for the national introduction of old age pensions (he already provided them for his staff by that stage) and in 1907 the Invalidity and Accidents Pensions Act was passed. Lever also campaigned for a shorter working day for factory workers (he introduced the eight hour day at his factories in 1894). He demanded better health and safety at work, and on his own premises was regarded as a pioneer in this movement. And he was one of the first employers to give employees a share of the profits.

Education was very important for Lever and two schools were built at Port Sunlight. Under company rules those aged 14 to 18 had to attend night school to better themselves. There was also a cottage hospital, which has today been converted to a boutique hotel. The care that Lever took of the people did really make a difference. While the average annual death rate in Liverpool was 20/100, in the village it was just 9/100. “The visitor is struck at once by the generally healthy appearance of the people,” noted W. L George in a 1909 account of Port Sunlight. “The appearance of the children is remarkable, for they are usually fat, rosy, and impressibly cheerful.”

Walking through the streets and parks of Port Sunlight is a good way to spend a couple of hours sunny Sunday afternoon. In Lever’s day, strict rules meant tenants were made to keep their homes in good shape (helped of course by the threat of random inspections at any point) and it seems standards have been kept up. Homeowners (representing today about two thirds of the 900 homes) and leaseholders must comply with strict building rules. They wouldn’t be able to put modern PVC windows at the front of their homes for example. The public open spaces are cared for by a team of six gardeners, partly paid for by a nominal £1 maintenance charge collected from each of the homes every year.

Lever loved buildings and personally oversaw the development of Port Sunlight. He employed a team of 30 architects to ensure that the construction styles didn’t become monotonous. The quality (they cost around £250 each to build, far higher than other workers’ houses at the time) and detail in carvings is phenomenal. Although individual, most consisted of three or four bedrooms, with a kitchen, scullery, larder and “each house has the exceptional luxury of a bathroom.”

Just as important for Lever was the space surrounding each home, with him arguing that the “building of ten to twelve houses to acre is the maximum that ought to be allowed…. Houses should be built a minimum of 15 feet from the roadway…. every house should have space available in the rear for a vegetable garden. Open spaces for recreation should be laid out at frequent and convenient centres… A home requires a greensward and garden in front of it, just as much as a cup requires a saucer.”

Perhaps the most impressive view is the long green boulevard stretching from the First World War memorial to the Lady Lever Art Gallery. If it wasn’t for the family homes shaded by trees along either side of the walk, you could think you were in somewhere like outside the White House in Washington. Lever dedicated the gallery to the memory of his wife Elizabeth and it houses the best of the 20,000 items, including furniture, ceramics, textiles and sculpture, he boasted in his personal art collection at his death.

While in his later life Lever travelled the world collecting pieces for personal satisfaction, earlier on he had gained them for business reasons. He bought paintings and added company slogans, encouraging consumers to buy them. “Art has always been to me a stimulating influence; it has always taught me without upbraiding me; elevated me without humbling me; and appealed to me because of the fact that only the best and truest in art survives…. Art can be to everyone an inspiration. It is within the reach of us all,” Lever said at the opening of the gallery in 1922.

Opposite the gallery is what was built as the original Girls’ Club. Today the building is a well-laid out museum telling the story of Port Sunlight and it also has a tea room. As we’ve seen, maintenance charges are very low for residents so the Port Sunlight Village Trust, which took over management of the site in 1999, relies on finding additional revenue opportunities, including through letting out luxury holiday cottages.

After building Gladstone Hall, Lever continued building public halls so that residents could enjoy a range of activities. Hulme Hall originally acted as a women’s dining hall, but then became a gallery and later as a hall provided the venue for two early Beatles concerts (one being the first time Ringo Star played with the group). Today, it’s popular with weddings. The Lyceum was built as a school, but was later used as a Sunday school and today is used by the community for meetings and other functions. And he built using red Cheshire sandstone, Christ Church, a nonconformist church.

Outside, an open air pool was built (today it’s a garden centre) which was heated by power from the factory. And there were separate bowling greens for both men (with accompanying social clubs and both are still in operation today). There really was always plenty going on.

Such was the vision that Lever displayed at the site that at one time 50,000 people (including members of the Royal family) travelled each year from across the world to visit Port Sunlight. Many stayed at the Bridge Inn, an institution which for the first few years of its life was run as a temperance hotel. Despite being a non-drinking nonconformist he decided to let the village to decide what should happen and gave everyone the vote (he hoped the women would vote to keep it dry). But the majority wanted it to serve alcohol and so it became a pub in a modern sense. Today, the exterior remains but the inside has been gutted and it resembles that of any other chain pub (it’s now part of the Sizzling Pub Company Brand).

While much has changed in this village over the years and it’s lost the connection with the Unilever plant, Lever’s vision still remains on show in the character of the wonderful homes and landscaping. Today, thousands of tourists come to marvel at this example of utopia. But had its architect known how it was going to turn out, there’s a chance it wouldn’t have been built. “I’d never build a second Port Sunlight,” Lever admitted to a colleague towards the end of his life. “It was a mistake, people who live and work together always quarrel.”