It is somewhat ironic that one of the first things I do after getting off the train at Letchworth Garden City – a pioneering Hertfordshire town founded in 1903 without any pubs serving beer – is stock up on alcohol. At a Sainsbury’s superstore on the edge of the town, I fill my basket with bottled ales for a Christmas party I am going to and then after unpacking the shopping at a friend’s house we head off to explore the pubs. What would Letchworth’s tee total founders have thought?

This Garden City – the world’s first – was based on the principles of social reformer Ebenezer Howard and was intended to be a new kind of town, setting out to combine the advantages of cities and the countryside while eliminating their disadvantages. His views were set out in an 1898 book entitled To-morrow: A Peaceful Path to Real Reform.

Howard wanted to offer working people living in overcrowded cities a better standard of living in sturdy homes with low rents and low taxes. He advocated zoning – keeping industry separate from residential areas – as well as ensuring there were plenty of trees and open spaces. And pubs serving alcohol were banned from the new town (although historic ones on the boundary of the new development remained), which meant its ideas struck a chord with the Quakers. This position wasn’t reversed until a referendum of residents in 1958.

Today, Letchworth’s licensed drinking establishments are there for all to see as soon as you get off the train from London. The Colonnade – with flashing lights from its loud disco – came into vision first when I left the station building on Friday night. It was a bitterly cold evening, but smokers were happy to stand in a cordoned off outside area.

Just around the corner in Leys Avenue, the Wetherspoons seemed to be doing a roaring trade on the Friday – with most tables occupied. We instead had some drinks and food in a newly opened bar run by the Loungers chain a few doors down which has opened in an old Argos store. Given its temperance roots, pubs have been created in buildings that previously had other uses (the Wetherspoons is housed in a converted 1920s shop building for example, while a fine ale-serving pub called The Arena Tavern that we visited later can be found in a tatty parade of shops).

While Howard had laid out the philosophy for Letchworth, he didn’t actually design it. It became a reality in September 1903 when a company (“the First Garden City Ltd”) was created and architects Barry Parker and Raymond Urwin were appointed following a competition. Initially some 3826 acres of Hertfordshire countryside was purchased at a cost of £160, 378, but the town was later expanded.

Letchworth Garden City was showcased in two experimental housing exhibitions in 1905 and 1907 which together attracted some 60,000 visitors, many of whom arrived on special excursions run by the railway companies (a temporary station had been installed in 1903). The properties that participated in the Cheap Cottages Exhibitions can still be still today and – now privately owned – they can typically be identified by their commemorative plaques.

But while some marvelled at Letchworth and its founders’ attempts to create better lives for inhabitants, others mocked and the town became a popular subject for cartoonists. George Orwell, referred to the town in his Road to Wigan Pier book as the place where “every fruit juice drinker, nudist, sandal wearer, sex-maniac, Quaker, nature cure-quack, pacifist and feminist in England” could be found. 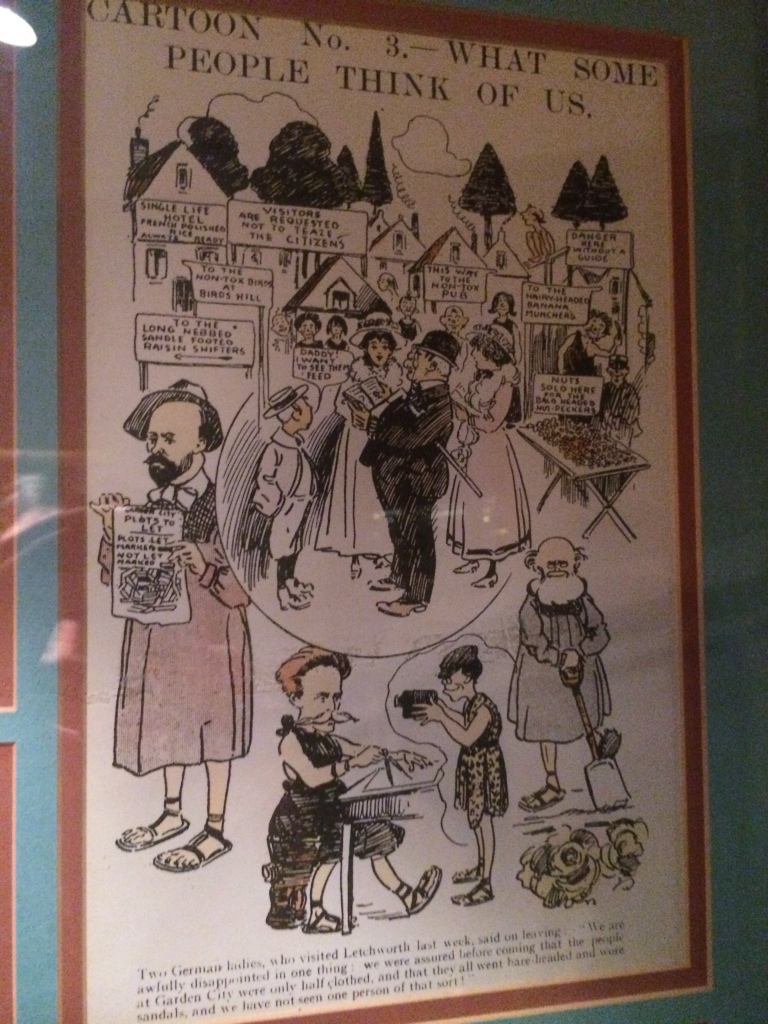 The fact that Letchworth had a pub – the Skittles Inn – that wasn’t licensed to serve alcohol created much ridicule. Opened in 1907, it became known as the “pub with no beer” and offered “fellowship, rest and recreation” for workers, with non-alcoholic drinks like Cydrax (a non-alcoholic apple wine), Bournville’s Drinking Chocolate, Tea and Sarsparilla served at the bar.

Since 1925 the building has been known as The Settlement, and has been run as a centre for adult education and local activities. The Letchworth Adult Educational Settlement had in other premises from 1920, with its first courses being Geology and English Literature.

The first public building in Letchworth was the Mrs Elizabeth Howard Memorial Hall, opened in March 1906 in memory of Ebenezer Howard’s first wife who had died two years earlier. We hired it as a group of 21 friends at the weekend for a Christmas meal – serving up turkey and all the trimmings – and it still seems to be used by a range of community groups through the week. 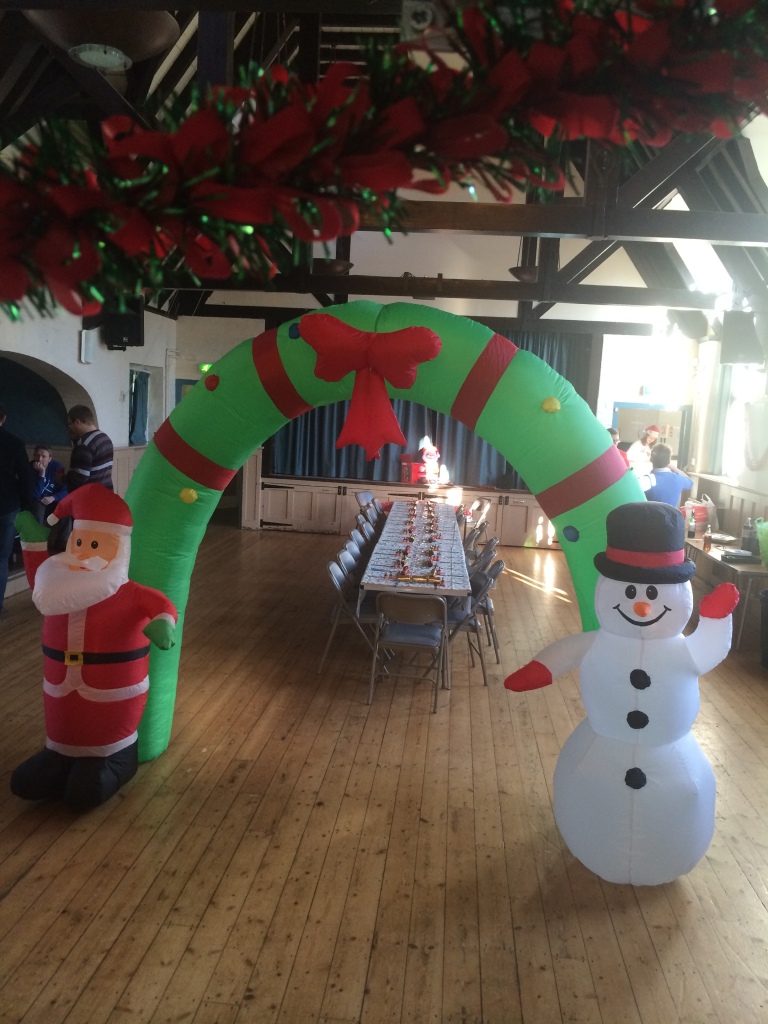 Fundraising and donations from residents paid the £1,300 needed to construct this wonderful building – white-washed inside and retaining exposed wooden beams in the roof – which was the home for Letchworth’s first library. The Grade II listed hall has over the years been used for everything from pantomimes and debates to youth clubs and a meeting place for the vegetarian society. And it is set at the end of Howard Park and Gardens, a popular park with formal gardens.

In 1935 a Georgian-style Town Hall was built overlooking the splendid Broadway Gardens – right in the heart of the Garden City – to house the District Council. The building, which looks like it could be from Boston in Massachusetts, is impressive in its own right but could have been part of a much grander scheme with a palace as its centre, as an etching in the ground shows. 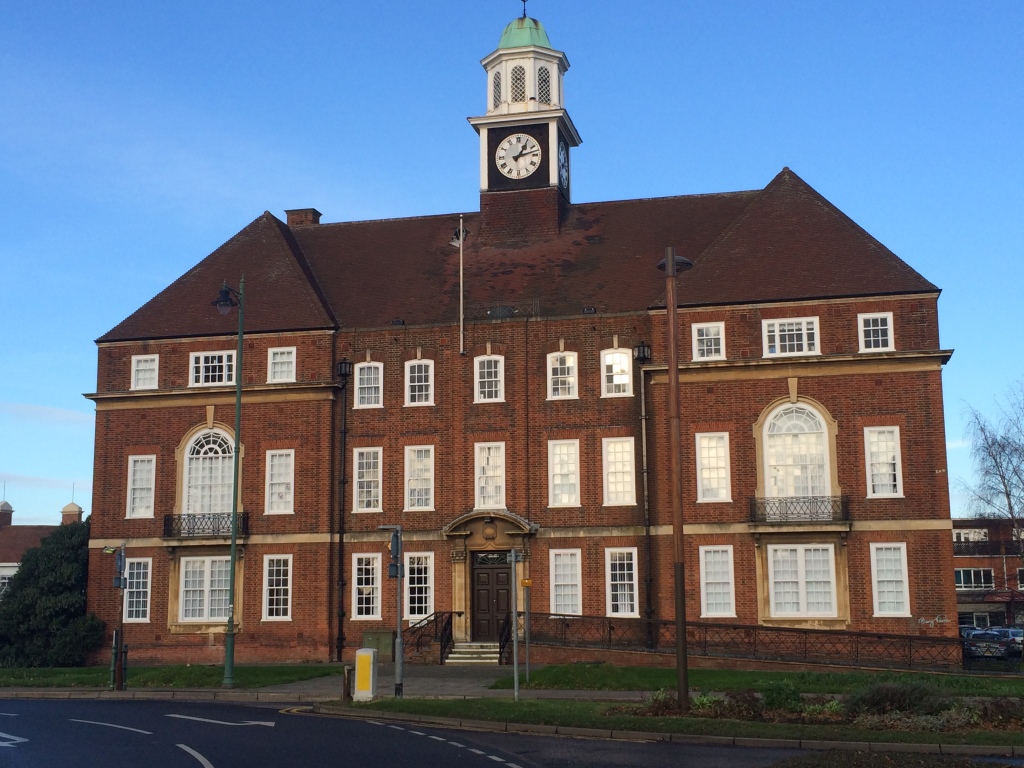 Broadway Gardens was re-designed in 2003 to mark the town’s centenary and now includes attractive fountains. This open space is also not far from Letchworth’s independent cinema (Broadway Cinema) which is housed in a 1930s Art Deco building and today has four screens retaining many original sumptuous interiors.

But Letchworth was not just ahead of its time on account of its housing and public facilities, as the Spirella Building on the north side of the town testifies. Built in three stages between 1912 and 1920 for Spirella – a famous US corset maker – the “factory of beauty” went further than most workplaces by providing its employees with showers, baths, fitness classes, a library and free eye tests. And it had a ballroom – still there and used for numerous events – so that the employees could attend formal dances.

The Spirella company stopped making corsets in Letchworth in the 1980s and the building fell into a poor state of repair. But the factory was purchased by the Letchworth Garden City Corporation in 1994 and it was re-opened in 1999 by HRH the Prince of Wales following an £11 million regeneration programme. Today, the Grade II* listed building is set in landscaped gardens with fountains.

Following the formation of the Garden City Association by Howard in 1899, he hoped that numerous Garden Cities would be built across the country. In the end just two were created in England, both in Hertfordshire – Letchworth and Welwyn. While the principals influenced many more developments around the world and indeed later planning policy, they didn’t take off as envisaged.

Today, the town is run and preserved by the Heritage Foundation that uses all profits to improve the town – hence why there is a very active scene of local groups. My weekend hosts are currently applying for a grant to help restore their back door to one more architecturally in keeping with the town’s heritage.

Before getting the train back to London, we had a walk around Norton Common, which encompasses 63 acres of grass and woodland, plus tennis courts, a bowling green and an open air pool. In one respect, this sums up everything that Howard wanted to create – a place where workers could live in pleasant surroundings. And the town is enclosed in a 13-mile circular countryside walk called The Garden City Greenway.

But in reality however Letchworth became popular with just the skilled middle classes and today it’s a long way from its self-sustaining ideals – many residents commute into capital for work. And The Greenway is currently threatened by new housing developments that North Hertfordshire District Council is under pressure to deliver. Then of course there are the pubs. What would Howard and the other founders think about these? 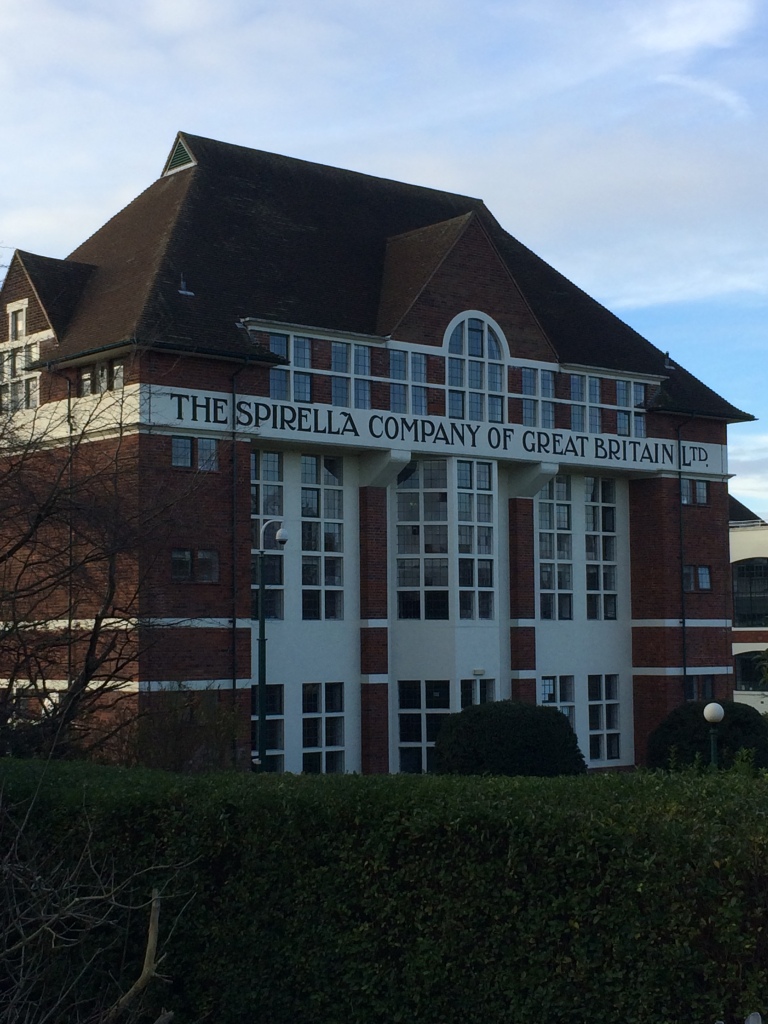