Walking across the wilds of Wimbledon Common, four white sails at the top of a wooden tower and red brick building glimmer in the afternoon sun.

Even though Wimbledon Windmill ceased to function long ago, the distinctive structure –which is now a museum dedicated to windmills – remains the main landmark in this vast public park.

I passed it as part of my 78 mile Capital Ring walk around the outskirts of London (starting this leg at Wimbledon Park, where across a lake you can catch a glimpse of the famous All Lawn Tennis and Croquet Club).

On Wimbledon Common, I was intrigued to go inside the mill (admission is a bargain at just £2) where a volunteer talked to me enthusiastically about its history.

Constructed by Charles March, a carpenter, in 1817, Wimbledon Windmill was built as a relatively unusual hollow post flour mill. He had made an application the previous year to the Manor Court “for the erection of a mill, which petition was signed by several of its inhabitants”.

The request was approved and a 99 year lease, with an annual rent of two shillings, was agreed “upon this special condition – that he shall erect and keep up a public Corn Mill, for the advantage and convenience of the neighbourhood”.

But it came relatively late on in the working history of windmills and at a time when factory-made flour was becoming readily-available. The very reason the new Wimbledon one was built was because some people were wary of the mass produced product, so this community facility allowed them to bring their grain to be milled for a small charge.

Being a hollow post mill, all the machinery turning a central post was located in one inner shaft, a design which my guide said would have been more expensive than other ways of building (it’s possible that the builder copied one that he’d seen on the roof of a circular meeting house in Southwark and thought this was the only way of building a windmill). Wimbledon Windmill is said to be the only remaining example of the hollow post type of mill in the country. 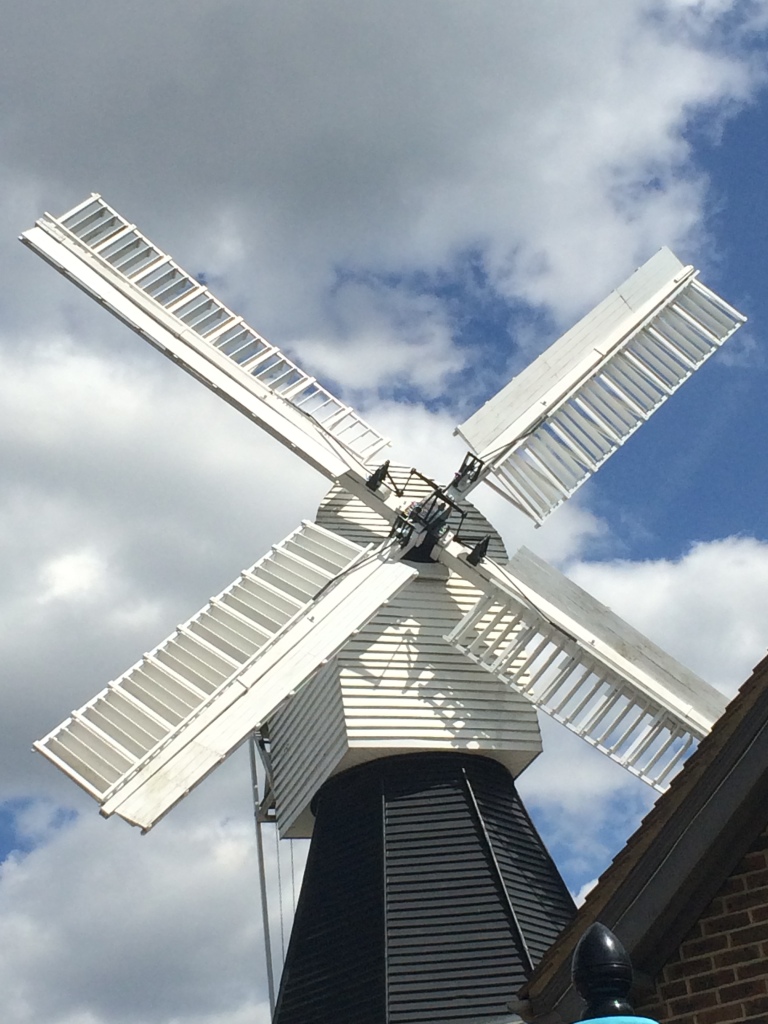 It ceased operating as a mill in 1864, but the Wimbledon Museum Trust which has runs it has an excellent scale model showing what the structure would have looked during its working days. And they’ve mocked-up some millstones – which ground the wheat into flour – while the pair of original millstones can be seen as you enter the museum (it’s believed there were two pairs of these on the first floor). They would have been powered by the sails which had a span of around 15 metres.

The displays in the museum run over two floors and you can also climb up a ladder to reach the first level of the tower. Here is a diagram of what the mill would have looked like when it was functioning.

Unfortunately, although the windmill has been restored, the sails are not attached to the newly-installed millstones. I was told that because the number of trees have increased in its vicinity over the years, the supply of wind varies to such an extent that they could be damaged if they were used for their original purpose.

Looking around the museum, I was intrigued to read about some of the millers, including Thomas Hunt Dann – the first miller – who was also constable for Wimbledon Common. He lived at the neighbouring Mill House and kept watch for thieves and robbers from the vantage point of the mill. The truncheon that was his badge of office is on display today.

Mill House was particularly celebrated later on in its history in that in 1907 Lord Baden-Powell wrote Scouting for boys here. Published in six fortnightly, the training aid essentially gave birth to the worldwide Scout movement. There’s a cabinet in museum that has a selection of early Scouting memorabilia, including copies of that now infamous book.

As for the mill itself, it was converted into cottages to house six families and the first floor walls were changed to brickwork after it ceased to operate in 1864. The museum has re-created one of these – Miss Towne’s room – with a fireplace and sink in the compact room. She arrived here in 1871 from Yalding in Kent and, continued her work as dressmaker. There’s a lovely picture in her room showing Wimbledon Common with sheep grazing and it’s possible she would have picked up scraps of wool to make clothes in her room.

The building achieved Grade II* listed status in 1954 and although there have been several bouts of repairs over the years, when the living accommodation was vacated in 1974 it became apparent that there was considerable amount of dry rot here. Urgent work was done to save the fabric.

It opened as a Museum of Windmills in 1976 (expanded in 1999 with help from a Heritage Lottery Grant) and features a room dedicated to scale models of structures from across the country.

Yet the actual reason Wimbledon Windmill had ceased to operate was because in 1864 Earl Spencer, the Lord of the Manor, wanted to enclose the Common as a private park and sell adjoining Putney Heath to developers. He bought out the lease for the mill from the Marsh family and wanted to demolish the building so he could replace it with a new home for himself.

The Earl however faced considerable opposition to his scheme and his Bill to parliament was turned down. The 1871 Wimbledon and Putney Commons Act handed over the park and the windmill, to the Wimbledon and Putney Commons Conservators that continue to look after it to this day (when I visited there were lots of posters pinned up to trees promoting their annual meeting to the public).
And if you are searching for evidence as to why saving this open space was so important, look no further than Walter Johnson’s 1912 book, Wimbledon Common; its Geology, Antiquities and Natural History which brings out the very best of the area as an extract demonstrates:

“He does not know Wimbledon Common who is not familiar with its labyrinths of leafy glades, its tangled thickets of wild red rose, bramble, and honeysuckle; who has not often traversed its turfy plateau and had the perfumes of odoriferous herbs borne in upon his senses; who has not pondered over its rusty pebble, and wondered whence they came; tried to acquaint himself with what may be gleaned of local history; First of all, to the Conservators of the Common, to whom we really owe very much, one may appeal for the preservation of the heath in its wild state… one prays earnestly that the Common be not vulgarised… by making this lovely spot ordinary – a kind of level, well-ordered suburban park, for this windswept Common is not ordinary; it stands alone, and is therefore priceless”.

The history of Wimbledon Common goes back much further than the 18th and 19th centuries however, with a habitation here in the paleothic age (there is a suggestion of a “Caesar’s Camp” being located in these parts).

The land fell into the hands of the Lord of the Manor, with it becoming so-called “common land” where “commoners” had rights such as grazing (many commons became enclosed in the 19th century and rights were lost). And prior to the current structure, there are records for windmills on Wimbledon Common going back to 1613 (possibly even earlier). It was also a popular place for duels in the 17th and 18th centuries, with the likes of the Duke of York and William Pitt participating before it was made illegal.

Today, most of the action is at the foot of Wimbledon Windmill, where there’s a busy cafe and clubhouse for the London Scottish Golf Club, which has its course here. Walkers have to be careful because the Capital Ring path crosses over a number of holes on Wimbledon Common.

After walking through the woods – and passing playing fields – of Putney Vale, I only had to cross over a main road and I was immediately at the gates of another vast area of open green space.

Richmond Park is the largest urban park is Europe, covering approximately 2,500 acres, and is a mixture of green open space, grassland and woodland containing numerous ancient trees (it’s one of Britain’s top five sites for these). Red and fallow deer roam free and there is much other wildlife here, including more than 100 species of birds. 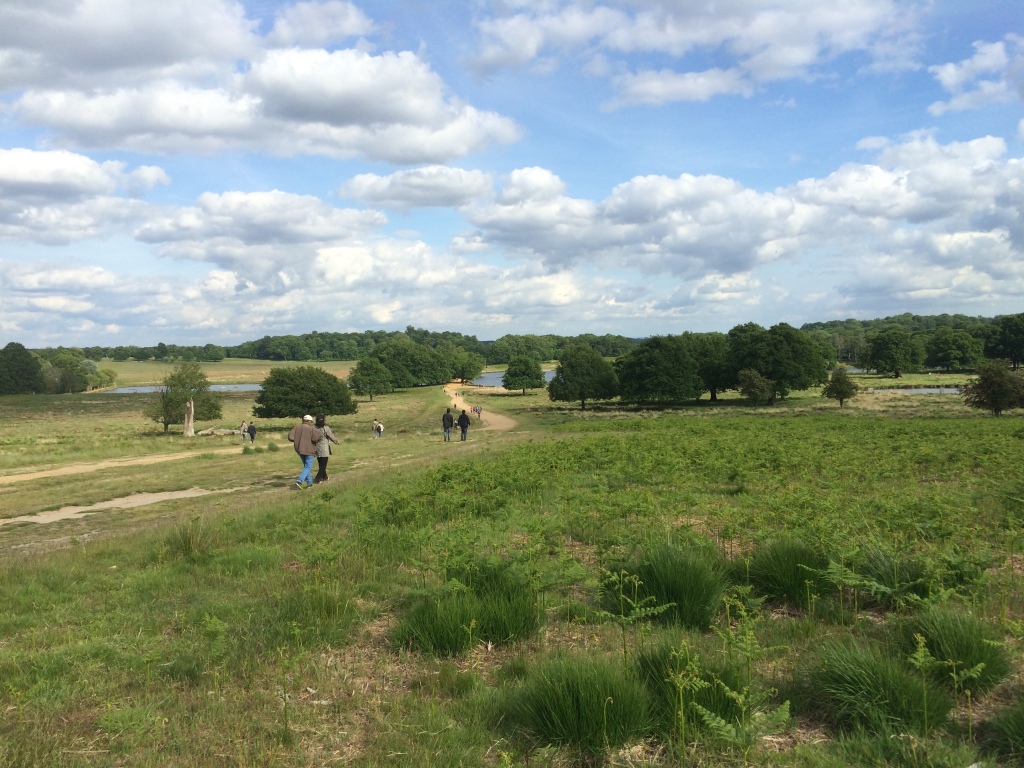 Dotted around are a number of lodges, including White Lodge, which was built in 1727 and now used by the Royal Ballet School. Originally home of the Park’s molecatcher, it was later lived in by Prime Minister Lord John Russell.

The royal connections to Richmond Park are believed to go back further than any of the others, starting with Edward (1272-1307), when the area was known as the Manor of Sheen. It became known as Richmond during Henry VII’s reign. Charles I moved to Richmond Palace to escape the plague in London and, in an unpopular move, enclosed the land to create a park for his deer.

I’ve been to Richmond Park a number of times before and my favourite spot remains the Pen Ponds, where the path passes between the two large pools of water. Ducks come right up to the edge. And on a sunny day it’s a perfect spot for a picnic and to take in the hilly surroundings, meaning that you can see for miles.

The last leg of my walk today took me along a bustling tarmac walkway along the banks of the Thames. It was a sunny early evening and people were enjoying Al fresco dining at the trendy upmarket restaurants, artists had their easels set-up by the waterside, while others were tasting glasses of bubbly on their boats.

I reached the arched 18th century Richmond Bridge – my intended destination for the day – and made for the town centre. I had seen some tatty high streets in earlier legs of the Capital Ring, but here things were completely different. Business seemed to be thriving for all of them, making London a true city of contrasts.

My trip along the Capital Ring continues next Thursday on Pastinthepresent.net when I walk from Richmond Bridge to Sudbury Hill station. If you have missed any installments from my trek, you can read all the articles that have been published so far here.