There’s no statue in the centre of Bowling Green park these days. An angry mob tour down the structure depicting George III in 1776 after George Washington’s Declaration of Independence and in its place now stands a fountain. At the same time, the tops of crowns from railings surrounding the greenery were sorn off and it is considered to be good luck to rub the rough iron tops. 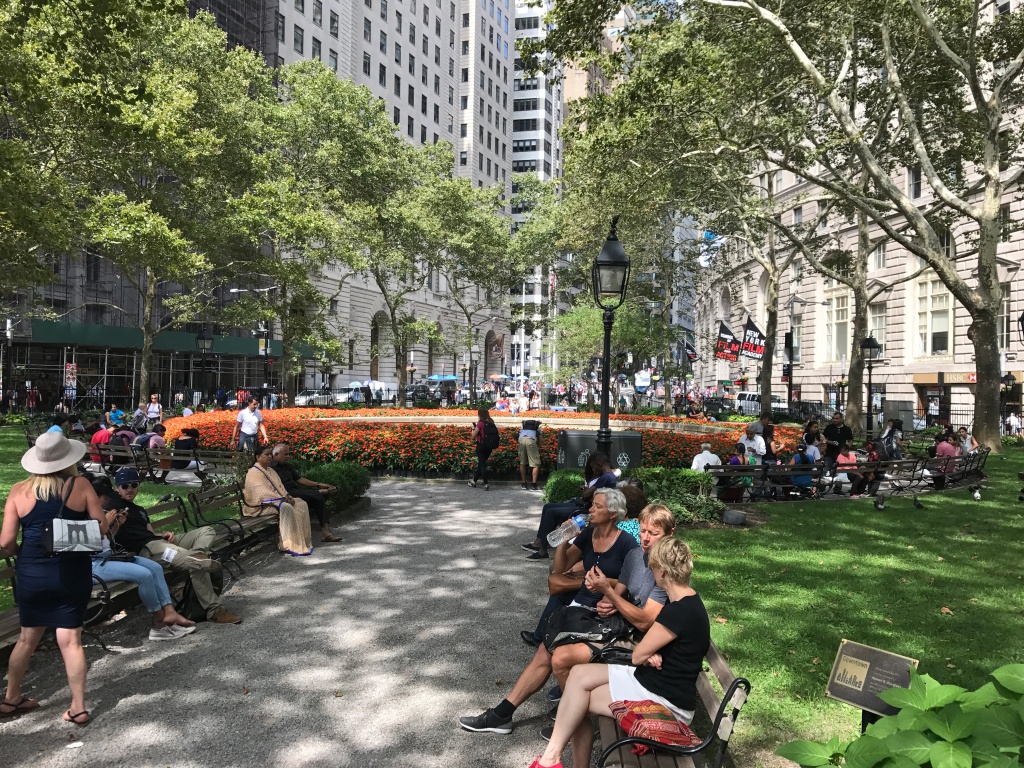 Bowling Green may only be occupy a tiny site in Lower Manhattan, but it packs in a lot of history. It is the oldest park in America, was once visited by George Washington and was the location where the Dutch settler Peter Minuit reportedly paid Native Americans who inhabited the land an equivalent of $24 to purchase the island.

After the English took over Manhattan, the people of New York leased Bowling Green park for a token rent of one peppercorn each. And now, more than two centuries after independence and today a popular place with tourists, it is a fitting spot to consider America’s early history.

When Giovanni da Verrazzano caught sight of Manhattan in 1524 he admired its “agreeable location” and christened it ‘Angouleme’ after the ancestral province of his patron Francois I. The Florentine explorer anchored at Staten Island, but chose not to explore the tidal estuary of modern-day New York’s main island and headed back home.

Sailing in the French vessel La Dauphine, Verrazzano was the first European to lay his eyes on Manhattan, however he had done so by mistake. Like many explorers of his age he was searching for a Northwest Passage to the Orient in a bid to challenge Spanish and Portuguese dominance of the seas.

Some 85 years after Verrazzano, English explorer Henry Hudson, travelling in his boat the Halve Maen (Half Moon) and backed by the Dutch India Company, was on the same mission to reach China. When he found himself in this part of North America he also chose not to explore the area further and pressed on with his attempts to discover the Northwest Passage. Two years later, on a fresh unsuccessful voyage in search of the Orient, he died in the icy waters of northeastern Canada.

Although Hudson had been uninterested in North America, his Dutch backers had different views about the land and surrounding estuary that Hudson had discovered and in 1624 sent 110 settlers to begin a trading post here. The call for “diverse merchants, wishing to to discover New Unknown Rivers, Countries and Places” was predominantly driven by demand for a commodity known as beaver pelts for use in hats and other articles of fashionable fur clothing.

Some of the first settlers were Belgian Huguenots who had come to the Dutch Republic to escape religious persecution and were given free passage and supplies in exchange for six years labour on modern-day Governors Island – the site of the first Dutch colony in North America.

Soon however the settlers moved to nearby ‘Manahatta’, as the island of forests and pastures was originally known. It was not only seen as easily defendable given its narrow southern tip but, according to early colonist Adriiaen van der Donck, provided “good opportunities for trade, harbors, waters, fisheries, weather, and wind and many other working appurtenances corresponding with the Netherlands, or in truth and more accurately exceeding the name.”

But as Verrazzano and Hudson had found to their cost, the Dutch weren’t in fact the first people to settle on the Eastern seaboard. The Lenape (meaning ‘real people’) tribe had lived in this area for centuries and challenged both explorers, with resulting attacks and counter attacks between the Europeans and Native Americans.

When the Dutch settling party arrived, the cooperation between the two made the fur trade possible and in their first year on the island 1,500 beaver belts were sent back home. However, the Europeans soon became more interested in the land the Lenape’s lived than the exchange of goods. And so the West India Company ordered its governors to “induce” the Native American tribe “by means of some amicable agreement…. to give up ownership and possession to us, without however forcing them thereto in the least or by taking possession by craft or fraud, lest we call down the wrath of God upon our unrighteous beginnings.”

This led to the governor of New Netherlands, Peter Minuit, purchasing the island of “Manhattes from the Indians for the value of 60 guilder” in 1626. Some have however disputed the validity of this transaction, suggesting that the Lenape tribe didn’t believe it was to be a permanent arrangement.

Nevertheless, the Dutch had every intention of staying and set about constructing Fort Amsterdam – with a branch of the Reform Dutch Church – and other buildings, including a village of turf houses. Given that the West India Company found it hard to manage employees from Amsterdam, it soon took the decision to decentralise ownership of land and plots were sold off to wealthy Dutch landlords, which quickly made use of slaves brought over from Africa. After a period of service, some were however partially freed and given ‘Negroe Lots’ on Manhattan island.

Under the governance of William Kieft, a merchant who had arrived in New Amsterdam in 1638, the colony fell into disarray. His decision to impose taxes on the Lenape to pay for construction projects led to all out war with the Dutch settlers, which culminated in a massacre of Native American men, women and children in a refugee camp, led to him being recalled by the West India Company after eight years in his post.

Kieft’s replacement Peter Stuyvesant attempted to make peace with the Lenape and rebuild trust with settlers. With colony growing fast, he presided over a series of laws, regulations and municipal reforms to ensure it was effectively administered through a court of burgemeesters and aldermen. Rules imposed were however strict, with Sunday church attendance compulsory and he prohibited the sale of liquor to the Native Americans. And bakers in the New Netherlands colony were banned for “baking white bread, krakelingen and cookies for the Indians rather than normal rye bread for the colonists.”

Stuyvesant had different views on the idea of tolerance imposed by his superiors back in Amsterdam, as he tried to ban Jews and Quakers. The West India Company wanted to welcome any group that would bring in a profit and they forced him to be more tolerant. But as with the case of the 23 Jews from Brazil that were imposed on him, he attempted to restrict the settlers ability to find land to build places of worship or indeed practice certain trades.

It was under under Stuyvesant that a wall was built to enclose the fledging Dutch settlement. The northern line of this is what is now Wall Street – now the financial centre of New York – and if you look carefully on the ground here you will be able to see traces of the posts showing where this defence once would have stood.

Battery Park, a 12-acre patch of greenery at the bottom tip of Lower Manhattan offers a great place to take a break from touring the city. But it will be better known to many tourists as the jetty to head to for embarking on boats to Ellis Island and the Statue of Liberty. However, it deserves to be remembered from the time of Dutch settlement when the first ‘battery’ of cannons was erected to defend New Amsterdam. 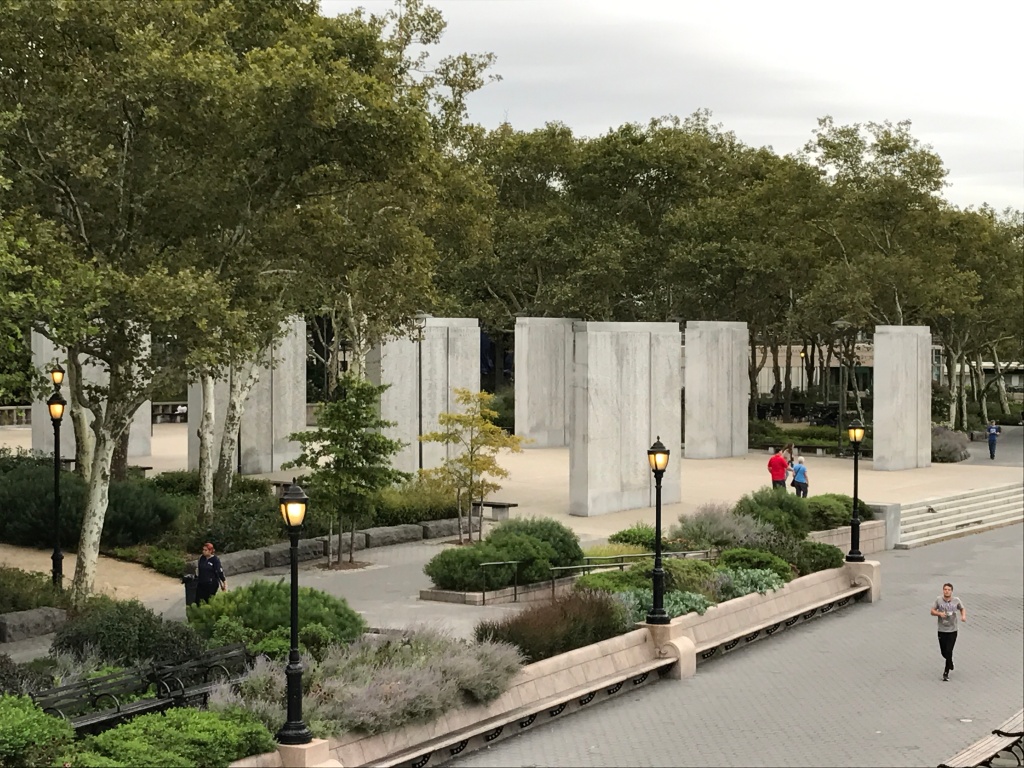 But the Dutch’s hold on New Amsterdam was fragile and when the English arrived in their battleships 1664, Stuyvesant opted to surrender without a fight. It was promptly re-named after King Charles II’s brother, the Duke of York. The English then surrendered to the Dutch in 1673, but their recapture lasted for little more than a year when England and Netherlands agreed terms of transfer for New York.

The Church of England was established as the official church in 1693. Fort Amsterdam became Fort James and streets were re-named so they sounded more English. Dutch weights and measures were replaced with English ones. And Dutch walls and canals – remembered in the name of Canal Street – in the city were abandoned.

Between 1700 and 1750, the New York’s population nearly doubled to reach 37,000 and the city and port became a place of significance, with a theatre, university, libraries, coffee houses and elegant homes. But it also had a slave market (40% of households owned slaves) and a red light district.

Just a few steps away from the Stock Exchange, Federal Hall is home to a museum charting the history of post colonial New York. But it stands on the site of the original City Hall, completed in 1703, and was where George Washington took the oath of office as the first US president in 1789. Even though the building has gone, the museum’s collection contains the very slab of stone he stood on to make the declaration.

Tensions leading up to the American Revolution had been growing for some time. John Peter Zenger, publisher of the New York Weekly Journal, made the case for self-government in the 1730s and the authorities tried to convict him for libel. “To Conclude: Power without control appertains to God alone; and no Man ought to be trusted with what no Man is equal to,” he wrote in one editorial.

But Zenger was acquitted and the idea of ‘freedom of the press’ was established in the process, largely thanks to a lawyer called Alexander Hamilton, who would go on to become George Washington’s secretary of the treasury and founder of the New York Stock Exchange. “It is not the cause of a poor printer, nor of New York alone, which you are now trying,” he said. “No! It may in its consequences affect every freeman that lives under a British government on the main of America. It is the best cause. It is the cause of liberty.”

When the British Parliament handed down in the form of the 1765 Stamp Act a tax on the paper used for official printed media, such as newspapers and legal documents, Hamilton’s speech of three decades later was remembered. The decision prompted the formation of the first joint assembly of the American colonies and the drawing up of the Declaration of Rights and Grievances – a precursor to the foundation of the United States of America. More than 200 New York merchants agreed to cease all trade with Britain and the government were forced to repeal the Stamp Act, but the wheels for revolution were by now in motion.

Independence was declared in New York by the aforementioned beheading of the statue of the king in 1776 and, with war brewing, by the summer of that year one third of people had fled lower Manhattan. There was never however the level of resistance in the city and that there was in places Boston and 35,000 Crown loyalists from across the 13 colonies re-located here. Soldier were billeted in homes and prison ships became a familiar sight in New York’s harbour.

After the war was over, New York’s claim on the seat of presidency was short-lived – many people didn’t trust both financial and political power being held in one city – and it soon moved to Philadelphia. But post-war it certainly wasn’t struggling with one observer saying it was “the first city in the United States for wealth, commerce and population” and by 1806 the population had reached 75,000.

In 1807 the entire island of Manhattan above Houston Street was surveyed and it was decided that New York would be laid out in “streets, roads, and public squares, of such width, extent, and direction, as to them shall seem most conducive to public good”. This Randel Plan of orderly grid of numbered streets and avenues, is what makes navigation in New York so straight forward today. But beneath the modern streets clues as to how the city played its part in the creation of the United States of America is there for all to see.