Spies and art lovers pass like ships in the night in Millbank these days. MI5 and MI6 aim keep a low public profile in grand buildings by the Thames, while tourists flock to Tate Britain and students study at the Chelsea College of Art & Design, part of the University of the Arts London.

Yet most who go about their daily business in this area, just a short walk from Westminster Abbey and the Houses of Parliament, probably have little idea that Millbank was once dominated by the National Penitentiary, an experiment in prison reform (and once London, and indeed England’s, largest prison).

Traces of the prison, which opened in 1816 and shut in 1890, have all but disappeared. But its existence hasn’t completely vanished. You get, for example, a sense of the Millbank Prison’s octagonal shape through the jagged angles of streets which marked the outer perimeter of the site. The houses that remain were where the prison warders lived, just outside the complex which was designed to hold some 1,000 convicts.

And if you look between Cureton Street and John Islip Street you can see a surviving part of the perimeter ditch of the prison, which in the 1800s was a stagnant outer moat.

Millbank Prison was an experiment in which inmates were to be kept in isolation. Mogg’s New Picture of London and Visitor’s Guide to its Sights (1844) said this “important establishment was formed for the purpose of trying the effect of a system of imprisonment, founded on humane and rational principles; in which the prisoners should be separated into classes, be compelled to work, and their religious and moral habits properly attended to.” Plan from the 1860s showing the position of the prison

Wardens sat in the centre of what was essentially a six-pointed star leading to corridors of cells, as the Handbook of London in 1850 describes it:

The external walls form an irregular octagon, and enclose upwards of sixteen acres of land. Its ground-plan resembles a wheel, the governor’s house occupying a circle in the centre, from which radiate six piles of building, terminating externally in towers. The ground on which it stands is raised but little above the river, and was at one time considered unhealthy.

That “unhealthy” description is perhaps an understatement. It was soon notorious enough for Dickens to include it within his novel David Copperfield. He described the area as “a melancholy waste … A sluggish ditch deposited its mud at the prison walls. Coarse grass and rank weeds straggled over all the marshy land.”

But while the set-up may have been designed to keep an eye on the convicts, it became apparent that the ventilation system allowed sound to carry, so that prisoners could communicate between cells and running costs grew extremely large. And so when the above Handbook of London description was written its role as the National Penitentiary has already been taken over by a new “model prison” at Pentonville, which opened in 1842.

As a result Millbank’s status was downgraded, by an Act of Parliament of 1843, to a holding depot for convicts who had been sentenced to transportation in Australia. Some say this is where the Aussie nickname POMs comes from – Prisoners Of Millbank. The Handbook of London describes the system than ran until 1867 (although large-scale transportation ended in 1853): 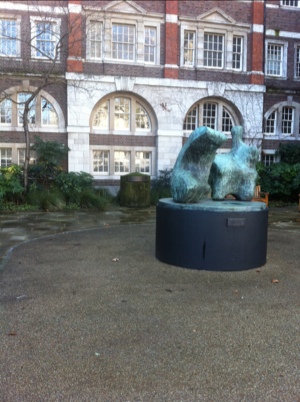 The Morpeth Arms, dating back to 1845 and which survives to this day, was a pub built for the enjoyment of wardens, but it’s also said to contain the remnants of a tunnel and cellar that formed part of the prison. Convicts were escorted along here as they were taken to barges on the Thames. The pub is believed to be haunted as there is a story that a prisoner died as he was taken through the passageway.

When the prison was finally shut in 1890 (and demolished two years later), some 16 acres of land was left vacant for re-development. What is now Tate Britain was opened in a new building on the site in 1897, just across the road from where the Royal Army Medical School (which, from 2005, has been occupied by the Chelsea College of Art & Design).

In addition, the Grade II listed Millbank Estate was built by the London County Council between 1897 and 1902, using the original bricks for the prison, to provide social housing for 4,430 residents. Each of the 17 buildings in the development is named after a British painter.

It’s a fascinating area of London of which to explore.