Lost world of the Crystal Palace

The Crystal Palace was “the most remarkable work of its kind the world has ever witnessed, appealing to appreciation of the wonderful with a force unknown in this country, and unrivalled in any other,” noted Bradshaw’s guide to London. Officially opened by Queen Victoria in Penge Park, next to Sydenham Hill, in 1854 the cast-iron and plate-gate building was a lavish exhibition and entertainment venue. It had originally been erected in Hyde Park to house the Great Exhibition three years earlier, when 14,000 from around the world has flocked to see the Industrial Revolution’s latest innovations.

Such was the popularity of the Crystal Palace that when the event ended, it was clear that the structure should be retained. So it was dismantled and re-built in an enlarged form in South East London. Bradshaw’s guide, published in 1862, noted that “a finer site could not possibly have been chosen. Standing on the brow of a hill rising some two hundred feet above the valley through which the railroad passes, the Crystal Palace is visible for miles away in every direction.”

Even before getting into describing the individual exhibits and features of the Crystal Palace, Bradshaw could not avoid making comparisons with highly regarded classical sites such as the Hanging Gardens of Babylon and the “colossal” temples of Egypt. All in all, “the building, the park, the waterworks, the garden inside and out, the fine art collection – all, more or less, surpassed what could be hoped for or desired.”

Sadly the Crystal Palace was wiped out in 1936 in a fire that was so large the glow could be seen in eight counties. Winston Churchill, one of 10,000 people on Sydenham Hill watching the blaze, said: “This is the end of an age.” While the site remained opened to the public and considerable sums have been invested in the park and sporting facilities over the years, it has never seen the glitz and glamour that Victorian and Edwardian visitors experienced.

But with a £500m plan by Chinese real estate company ZhongRong Holdings to re-build the Crystal Palace and renovate the gardens, currently being discussed with residents at a series of public meetings, could things be about to change? Ni Zhaoxing, Chairman of the said he wants to “update the innovative, translucent and delicate structure of the original along with its size and scale, which will be approximately the length of five football pitches and six storeys high.” The company added that the new Crystal Palace “will be a new cultural visitor attraction for London with detailed plans to be developed, which will include free public and world-leading international exhibitions and events.”

With Bradshaw’s 1862 guide in one hand and ZhongRong’s brochure in the other, I set out to find out what traces remained of the popular Victorian attraction. And like many visitors in the 19th century, I arrived by train. Just as the good transport links are highlighted in ZhongRong’s plan, Bradshaw noted that the “The noble site, the unrivalled view the splendid gardens and fountains will spread their attractions in vain on the heights of Penge unless the bulk of people can get there as quickly, cheaply and as they can get up and down the river.” The guide was therefore impressed that the railway line was extended to reach the site.

Arriving at Crystal Palace railway station (a grand building dating from 1876 to replace a much simpler 1854 structure), I made my way up a slight incline in the direction of the site where the Palace once stood. In Bradshaw’s day visitors would have walked from trains along a “covered way into the South Wing”, but I made my way across a muddy patch of grass and after dodging stray footballs was soon at the top of the hill. 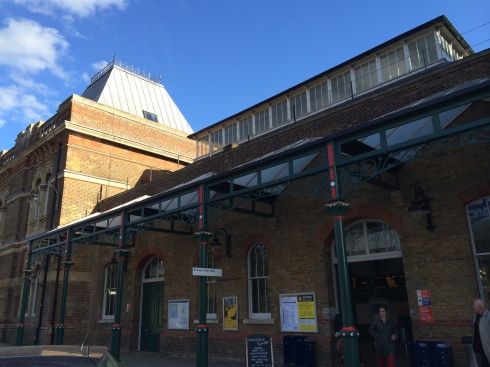 When it opened, Bradshaw said the Palace covered a space of 20 acres and was from end to end 1,608 feet – forty times bigger than the Medieval Westminster Hall, then the largest hall in England. Providing a general overview of the attraction for visitors, Bradshaw notes that “one half is devoted to ancient art, architecture, and sculpture, and that the other half, that facing the garden is appropriated to all the various forms of modern art, architecture, inventions, improvements, and manufacturers, together with a well-arranged Picture Gallery, which now contains nearly 1,000 pictures by ancient and modern artists.” Over the course of several pages he then describes the exhibits in each room and some of the lavish entertainment provided for visitors.

Unfortunately there’s nothing left of the Palace itself (some of the original footprint is grassed, part is covered with dense bushes and there is also the towering BBC transmitter, built in the 1950s). But thankfully some of the 19th century outdoor features are still visible today, not least the two-tiered Italian Terrace where visitors can be seen in photographs promenading in their best outfits. This separated the pavilion from sunken gardens and provided magnificent views across London. The stone-built Terrace extended along the whole base of the front of the Palace and, as it survives in its entirety, vividly illustrates just how enormous the building was. 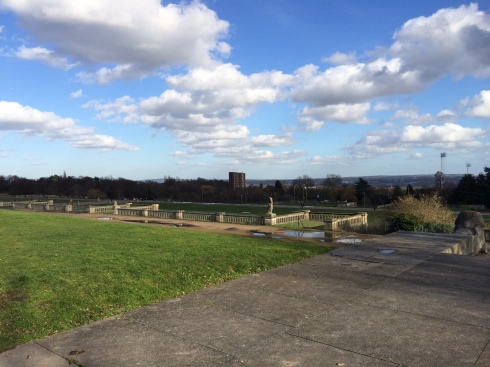 Other parts of the site (which Bradshaw notes extended to 289 acres and had nearly two miles of drives for carriages) have, however, been disrupted by new buildings constructed following the 1936 fire. The National Sports Centre, which includes an athletics stadium, was built in the 1960s and dominates the centre of the park. It was built in what were once the main fountain bases of Paxton’s water works.

Bradshaw goes into great detail about the fountains in the grounds, noting that “the whole park and garden resonant with the tumultuous murmurings of water a volume of water estimated to be only one-six less that discharged by the might cataracts of Niagara. The extent of the ground in which these fountains are displayed is ingeniously made to appear greater than it really is, by the skilful mode in which it has been treated.” One of Paxton’s great series of fountains survives near the Crystal Palace Park Farm, buried in dense undergrowth and it is hoped it will one day be restored to working condition.

There are a number of lakes which were recorded by Bradshaw that are still being used today. One, popular with fishermen, originally supported Paxton’s fountain system and featured an engine house with steam boilers and pumps. On the other side of the park is the bigger boating lake (in Bradshaw’s day it was known as the tidal lake because 11,788 individual jets of water helped push the water level up by nearly five feet). Popular in the summer months with people hiring pedalos, it is surrounded by a model collection of prehistoric creatures – popular with visitors in both Victorian times and now. 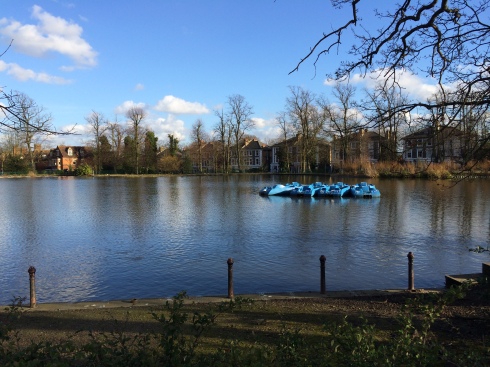 Children visiting the park today have lots of activities to keep them amused. As well as modern play equipment, the small farm and plenty of space to kick around a football there’s a maze originally constructed in 1879 to get lost in – the largest in London (and one of the biggest in the country).

While there are plenty of positive things to say about the park, if Bradshaw’s authors visited today they would be disappointed by the catering on offer. Visitors have to make do with a distinctly average café serving burgers and bad coffees in polystyrene packaging, while Victorians enjoyed much finer fare. Inside the Palace, the Saloon for example was said to be “richly carpeted and decorated, and fitted with every elegant convenience” and served a wide range of hot dinners including soups fish and entrées. It was one of many places on the site where guests could be wined and dined, another, The Coffee Room, could host banquets for 500 guests.

Before heading back to the station, I pop into the Crystal Palace museum, housed in a building originally used by the Crystal Palace Company’s School of Practical Engineering. The displays describe the original site in Hyde Park, the building’s relocation to South East London, the heyday at the complex and the devastating fire. If ZhongRong’s plans are approved, it could one day also be telling the story of how a replica Crystal Palace and the restoration of original Victorian features in the gardens transformed the site.