In 1807 an Act of Parliament abolished the trading of slaves in the British Empire. While not ending slavery itself (that would come in 1833 following further legislation), it was a remarkable achievement in bringing to a conclusion a shameful trade. Some estimate that between 1662 and 1807 some three and a half million Africans were transported as slaves, in appalling cramped, unhygienic conditions, on British-built ships to be sold to work on plantations in the New World. But while credit has been quite rightly placed on William Wilberforce’s tireless campaign in parliament, there were many in truth many involved, and many stages, leading to the historic act of abolition.

Much can be made of judgements laid down by the 1st Earl of Mansfield, as the Lord Chief Justice. Most famously perhaps, in the Somerset case of 1772, he declared that slavery was unsupported by common law in England and Wales. The judgement prevented Charles Stewart shipping a slave, James Somerset, he had brought with him to in England in 1769 back to Jamaica where he was destined be sold. In England, Somerset had escaped and the ruling said the imprisonment following his re-capture was unlawful. In a decision that would have angered many businessmen in Britain who made profits out of slavery, Mansfield was clear with his views on the trade:

“The state of slavery is of such a nature that it is incapable of being introduced on any reasons, moral or political, but only by positive law, which preserves its force long after the reasons, occasions, and time itself from whence it was created, is erased from memory. It is so odious, that nothing can be suffered to support it, but positive law. Whatever inconveniences, therefore, may follow from the decision, I cannot say this case is allowed or approved by the law of England; and therefore the black must be discharged.”

In another case, Mansfield investigated the 1781 Zong massacre in which some 142 African had been killed and he ruled that there had been a drowning of human “cargo”. The insurers of the Liverpool owned ship had refused to pay out for the loss after the slaves had been thrown over-board because it was running low on potable drinking water. Given the circumstances Mansfield said the claim was illegitimate and the resulting negative publicity helped to raise awareness of the terrible conditions of the so-called ‘Middle Passage’ amongst the public, supporting the abolitionists’ campaign.

Some have argued that Mansfield was heavily influenced by his great niece, Dido Elizabeth Belle, who was raised at his country retreat on the edge of Hampstead Heath, Kenwood House. Visitors to the Lord Chief Justice’s home said he “show the greatest attention to everything she said.” As the illegitimate daughter of a Royal Navy captain, Sir John Lindsay, and a black slave called Maria Belle, she was very aware of the shameful trade.

With Belle – a brilliant film telling Dido’s story, with the Zong case taking place in the background – having just opened at the cinema, it seemed an opportune time to visit Kenwood House at the weekend. The fine, white-brick property, set on the edge of Hampstead Heath has only fairly recently re-opened to visitors following extensive renovation work. Originally constructed in the 17th century (although later completely re-constructed) it passed through a succession of owners before it was bought by Mansfield (born William Murray) for £4,000 in 1754. And in 1767 he engaged the architect Robert Adam to remodel the house to reflect his increasing status and wealth.

Over the course of 15 years, Adams built the new Great Room and added a fine library, as well as making a number of other improvements to other parts of the property. The author of a 1782 guide to London was clearly impressed with what we now call Kenwood: “Cane Wood, the superb villa of the Earl of Mansfield…. The house is magnificent and the garden front, which is very extensive, is much admired.” Mansfield didn’t have his own children, but the renovations would have been appreciated by two girls – Dido and her cousin – he and his wife had agreed to look after at Kenwood.

Although the circumstances of Dido’s birth are somewhat sketchy, it is likely she was born in 176, having been conceived during a voyage to Jamaica when her father was captaining a frigate called Trent. Her mother moved to Florida, where she was given some land, sometime after 1774 and as a single parent who spent a considerable time at sea, Sir John entrusted her to her great uncle. The film tells of her growing up at Kenwood with her cousin, Lady Elizabeth Murray, the pair depicted in a wonderful painting. In the 18th century, this sort of artwork, showing a mixed-raced women which her white relation was rare. Sadly the original is no longer hanging in north London. 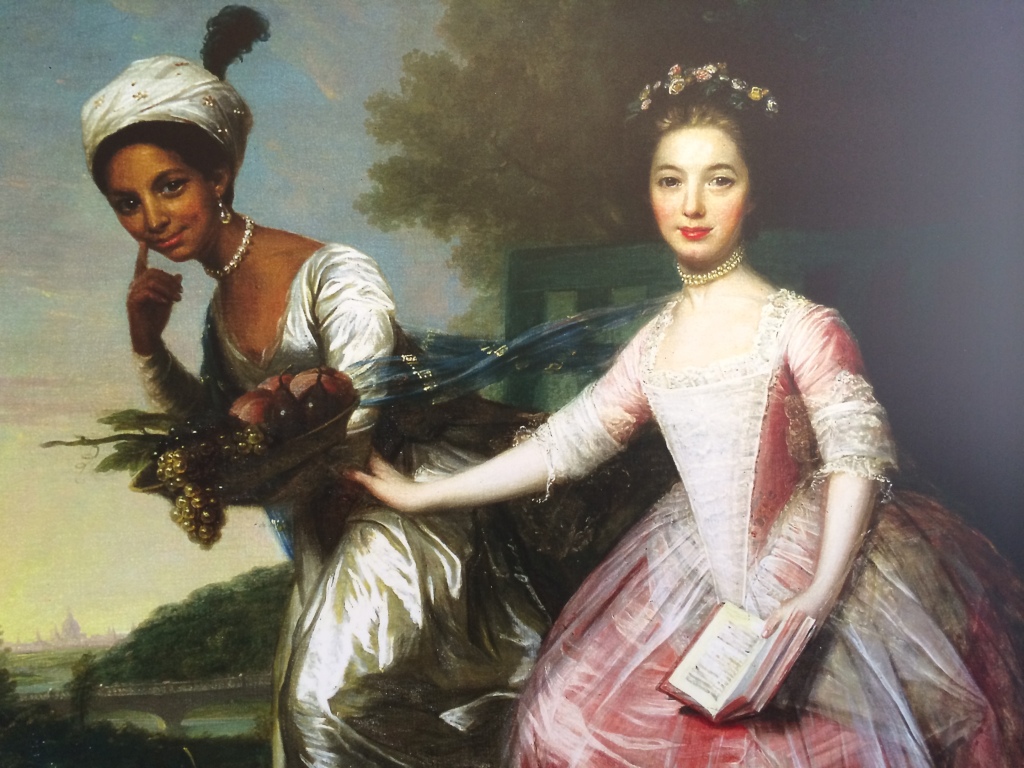 Dido Elizabeth Belle and her cousin Lady Elizabeth Murray painted at Kenwood House. Sadly the original is no longer in north London

Walking around Kenwood today, it’s clear that the house with its grand, spacious rooms and fine gardens would have been perfect for entertaining. In the company of his wife, Lady Elizabeth Finch, Mansfield was said to be a good host, possessing “the happy and engaging art…. of putting the company in good humour with themselves: I am convinced they naturally liked him the more for his seeming to like them so well.” King George III and his wife Queen Charlotte were said to be have regularly visited Kenwood, along with a host of lawyers, politicians and artists.

But one person that was kept away from the lavish functions was Dido, who was depicted in the film as being in an unfortunate position in that she was too lowly to dine with guests, but too elevated to eat with the servants. Here was an educated and literate lady who, because of the colour of her skin and background, was forced by social protocol to find her own way in the world. Still, Mansfield must have been fond of her because he left her £500 in his will and an annual allowance of £100. And, in real life, Dido married John Davinier, a senior servant, with whom she had at least three sons with (in the film he was portrayed as an enlightened vicar’s son who was campaigning for abolition).

While modern forms of slavery still sadly exist today, Dido and Mansfield together made an enormous contribution in shaping the course of history. Kenwood House, where they lived, therefore plays an important role in the story of abolition.