With discarded pizza boxes, overflowing industrialised-sized wheelie bins and a strong smell of vomit, the shabby back alleys and open air car parks of Manchester hardly portray the city in the best light. As you would expect, the Christmas market stalls and high street stores are doing a much better job of pulling in the crowds at this time.

Why then would I choose to spend a good few hours wandering around some of Manchester’s quieter, less salubrious spots?

In short, it seemed a fitting way of finding out more about Friedrich Engels (who would have been 194 tomorrow). When the founder of communism – who formed a long-standing partnership with Karl Marx – went about chronicling the experiences of Manchester’s over worked and impoverished labourers in the mid-19th century he went into their slums in the centre of the city.

The cotton industry – of which Manchester at one stage controlled 80% of the world market – grew extremely rapidly in the late 18th and early 19th century, bringing about a surge in the population. Between 1773 and 1801 the population of Manchester almost quadrupled in size from 22,500 to 84,000 inhabitants. But adequate living accommodation and large families were squashed into small spaces where cholera became rife.

While the crumbling homes they lived in have largely been wiped away through the modernisation of Manchester, many of the surroundings that would have been familiar to the poor remain. Even in places where new buildings have sprung up, it’s the roads, courtyards and railway viaducts that provide clues to the city’s past.

I joined Ed Glinert, former Private Eye staff writer and author of the Manchester Compendium, on a walking tour in search of the Manchester that Engels would have known. From visiting the spots of where he chronicled the living conditions faced by the poor to the site of his office where he spent where his days as a cotton merchant our guide did his best to turn the clock back 170 years.

Born in 1820 in what is now Wuppertal in Germany, Engels was sent to Manchester by his father in 1842 to work in the family’s textile business, Ermem and Engels (which had its head office in Southgate, near where House of Fraser is today). It was hoped that by moving abroad, his soon would leave radical side behind. But arriving in the North West and seeing what industry did to ordinary people only seemed to make him more determined in his cause.

Location of Engels’s office in Southgate, near where House Of Fraser is today

During his time in Manchester Engels stayed at multiple addresses (none of the properties are still standing) but it’s unclear how long he spent in each. The Prussian secret services had closely followed his movements back at home on account of his anarchist behaviour and he believed he would also be tracked here, so he kept patchy records.

In his day job as a merchant, he would meet other businessmen in the Exchange (now Royal Exchange, a recently refurbished theatre) where cotton deals were thrashed out before the transactions were hammered out in near-by chop houses in the old city. 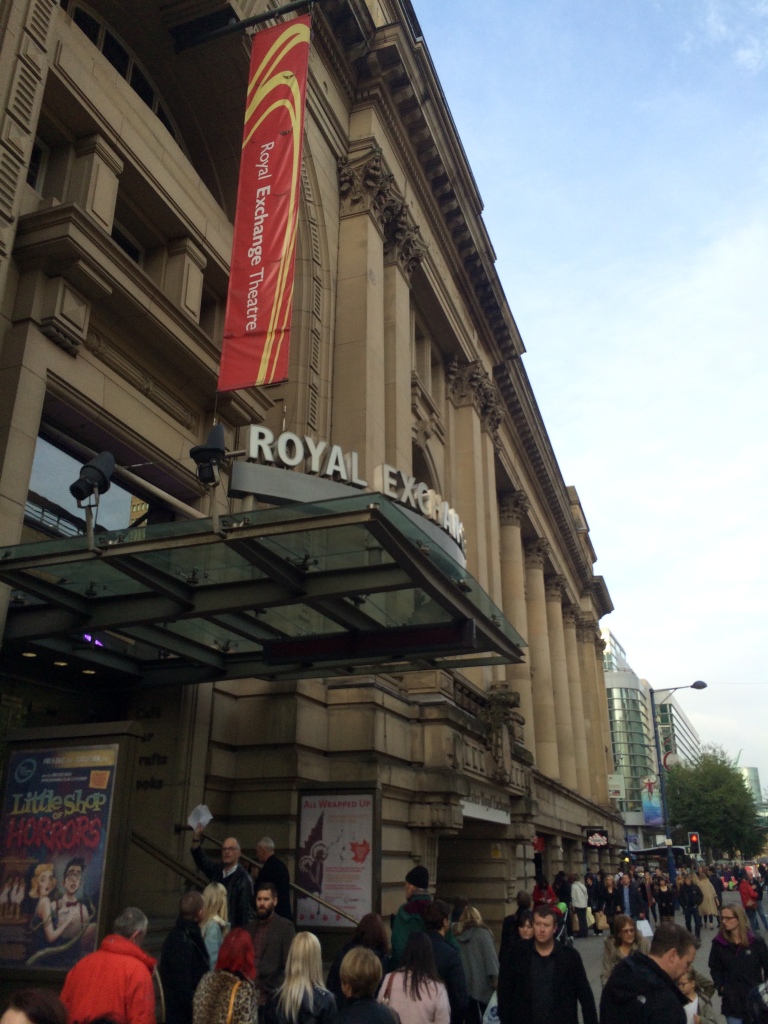 But his views remained very different from that of his father who was a keen supporter of capitalism. Indeed, before Friedrich arrived in Manchester, Engels senior put an advert in the Manchester Guardian thanking the authorities for their help in quashing the Great Strike of 1842. Friedrich would have been appalled.

Engels Junior devoted a considerable amount of his time in the North West walking the streets of the world’s first industrial city, charting the conditions of the poor. Accompanied by his Irish partner Mary Burns, he was appalled that many lived in absolute squalor, especially given the vast sums of money that were flooding into Manchester thanks to the cotton trade.

He reported his findings in the Condition of the Working Class in England, published in German in 1844 and translated into English in the 1870s. Here Engels described an area called Little Ireland, which is today the vicinity of Oxford Road station:

“In a rather deep hole, in a curve of the Medlock and surrounded on all four sides by tall factories and high embankments, covered with buildings, stand two groups of cottages, built chiefly back to back, in which live about 4,000 human beings, most of them Irish. The cottages are old, dirty, and of the smallest sort, the streets uneven, fallen into ruts and in part without drains or pavement; masses of refuse, offal, and sickening filth lie among standing pools in all directions….. The race that lives in these ruinous cottages, behind broken windows, mended with oil-skin, sprung doors, and rotten door-posts, or in dark, wet cellars, in measureless filth and stench must surely have reached the lowest stage of humanity.”

While some commercial buildings (like the Royal Exchange) and the Cathedral remain, the slum accommodation in the city has largely been wiped out through successive improvement schemes. Although Glinert did point out a fried chicken shop on our walk and suggested the 18th century building was an example of a weaver’s cottage, the type of building that Engels would have seen.

But to truly understand the lives of workers in 19th century Manchester, we need to go back to Engels’s words. He describes the “degree of dirt and revolting filth, the like of which is not to be found elsewhere” in the vicinity of what is now Victoria station, adding:

“The worst courts are leading down to the Irk, which contain unquestionably the most dreadful dwellings I have ever seen. In one of these courts, just at the entrance where the coveted passage ends, there is a privy without a door. This privy is so dirty that the inhabitants of the court can only enter or leave the court if they are prepared to wade through puddles of stale urine and excrement.”

Engels was writing about the area during a considerable period of change, with the building of the railways making many people homeless. Victoria station itself was in fact constructed on a pauper’s burial ground and recently, with major excavation works having taken place as part of a £27m revamp for the terminus, human remains from the 19th century have been unearthed. 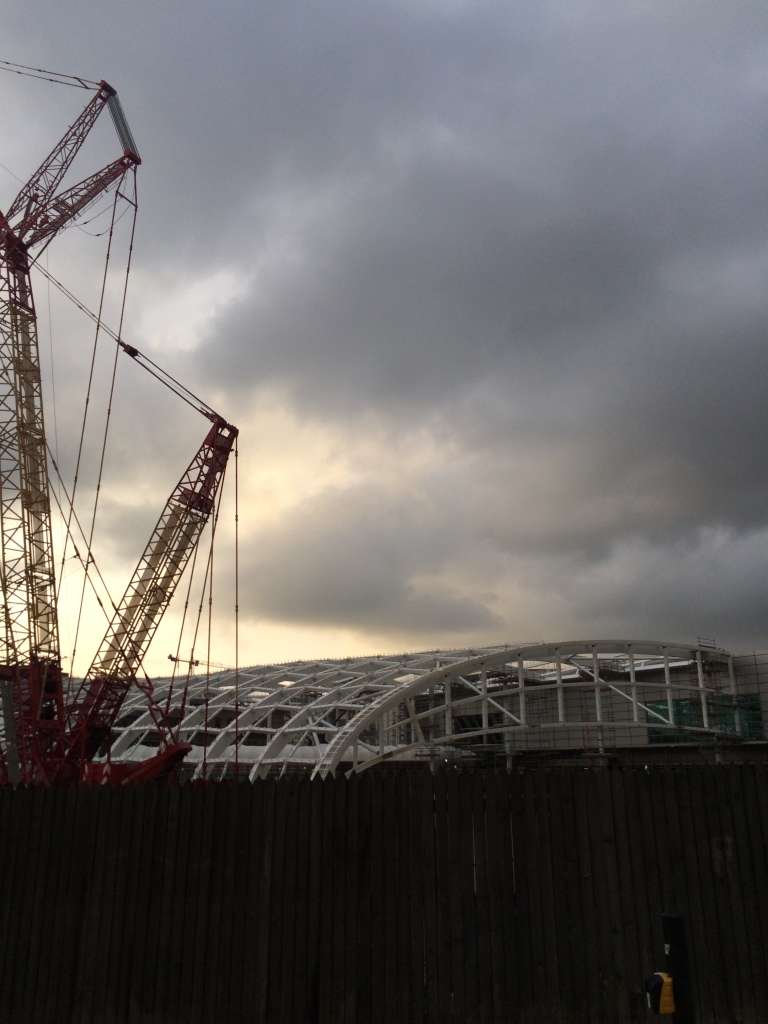 Shortly before arriving in Manchester, Engels met Karl Marx for the first time and in the years that followed the pair developed a close friendship. Indeed Engels’s income from his work in the cotton trade allowed him to finance Marx’s research, including major projects such as Das Kapital. He sent five pound notes to him in London, cut in half so that post office workers would be less likely to steal them (Ed Glinert amusingly noted that the modern way of sending payments, online, is of course free of any risk of fraud!).

Marx and Engels came to Chetham’s Library, part of an impressive collection of buildings that still stand near the busy shopping streets, in 1845 to research what developed into the Communist Manifesto and in 1852 they returned to write a satire about the communist party. Engels later wrote to Marx: “During the last few days I have again spent a good deal of time sitting at the four-sided desk in the (library) alcove where we sat together twenty-four years ago. I am very fond of the place. The stained-glass window ensures that the weather is always fine there. Old Jones, the librarian, is still alive but is very old and no longer active.”

Sadly, as I visited at the weekend, the library was closed but it is possible to go inside during the week. Apparently, it is especially popular with travellers from China and other communist countries. They all want to see the desk where the pair did some of their research.

Marx and Engels had wanted to bring about change through a complete overthrow of the capitalist system. In the end however, unlike other European countries, there was no revolution and progress slowly came about through the ballot (for them that would have been little more than tinkering with the system).

In the decade before Engels first arrived in Manchester, the town council was established (which gradually seized power from the Mosley family, the lords of manor). And over time the voting franchise was extended, both at a local and national level.

But the pair still have a lasting in legacy in helping to make society more equal place through chronicling the lives of those that didn’t have a voice. Engels’s research helped the Ten-Hour Bill, which limited the length of the working day, to be successfully passed for example.

Yet for all we know about the work of Engels during his life, thanks to his various writings, there is no grave where people can make a pilgrimage to. As was his request, when he died of throat cancer in 1895 (age 74) his ashes were scattered off Beachy Head, near Eastbourne.

‘Scotland’ – once one of the worst areas in the city.