With the likes of St Paul’s Cathedral and Westminster Abbey on the “Places worth seeing” list, a modern day visitor to London would find much of the 1862 edition of Bradshaw’s Illustrated Hand Book To London And Its Environs very familiar. Written with the railway traveller in mind, the publication […]

On Guildford’s bustling high street the build up to Christmas is in full swing. The decorations are up, the Salvation Army band is playing and the shops are packed. Here in commuter belt land, the tills are ringing like there is no tomorrow. But a mere 20 minutes […]

With discarded pizza boxes, overflowing industrialised-sized wheelie bins and a strong smell of vomit, the shabby back alleys and open air car parks of Manchester hardly portray the city in the best light. As you would expect, the Christmas market stalls and high street stores are doing a […]

Shoreditch must be one of the trendiest places in London right now. While shiny new sky scrapers and modern shopping malls are springing up in other parts of the capital, this district just a short hop from the City is growing organically. Shoreditch cafes arguably serve up the […] 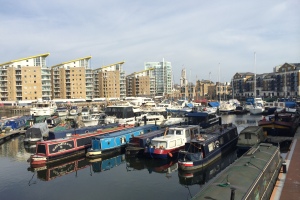 The pubs on the stretch of the Thames from the Tower of London to Canary Wharf are pleasant places to enjoy a night out with friends. Many of these north bank drinking establishments go back hundreds of years and walking into them today you can really feel the […]

Shad Thames is today one of the trendiest parts of London. It’s a glitzy stretch on the south bank of the river Thames with smart restaurants, fashionable boutiques and expensive apartments in converted Victorian warehouses. While the development has been popular for some time now, the opening of […]

As cholera swept through London in the 1800s, no corner of the capital was left untouched. Hundreds of thousands died as the water-borne disease spread. But while some improvements were made to the sanitation over the course of the century, it seemed that the East End was left […]