With the likes of St Paul’s Cathedral and Westminster Abbey on the “Places worth seeing” list, a modern day visitor to London would find much of the 1862 edition of Bradshaw’s Illustrated Hand Book To London And Its Environs very familiar. Written with the railway traveller in mind, the publication has detailed descriptions of the main stations as well as a host of popular attractions, such as Buckingham Palace and the British Museum.

But flicking through the pages of a re-issued edition of Bradshaw’s Victorian guide, I was intrigued that it also suggested visitors went to look at Bethlem Hospital, a “notable institution, designed for the reception of those who are suffering from that most awful of human maladies, mental aberrations…” The listing notes that visitors were permitted on the “first Thursday in each month, or daily, by special order from any of the City Aldermen.”

Bethlem was at the time housed in the building now used by the Imperial War Museum in Lambeth. Opened in 1815, on the site of “a notorious tavern” called The Dog and Duck, it was the third home for this institution. Bradshaw’s account said it “covers a surface of fourteen acres, and presents a fine exterior, consisting of a centre and two wings about 700 feet in length.”

With a new museum – Museum of the Mind – having just opened at the fourth (and current) Bethlem Hospital in Beckenham, Kent, I set out at the weekend to track down the history of this notorious institution. Often referred to in its shortened form, Bedlam, the very name is synonymous with the terrible conditions found in madhouses of the past.

New Museum of the Mind at Bethlem Hospital

Bethlem was founded as a priory in 1247 by Simon Fitzmary, an Alderman, roughly where Liverpool Street station is today (there is a blue plaque on the Andaz Hotel and Liverpool Street was in fact called Bethlem Street until 1825). Thousands of skeletons are currently being unearthed by archeologists working on the site where a new Crossrail station is being built.

In a document of 1329 Bethlem was referred to as a “Hospital” and the first evidence that insane patients were housed there comes in 1403 when it contained (amongst others) “sex viri menti capri” or literally “six men whose minds had been seized.” Mentally disordered have been treated at the institution since at least that latter date, making it likely that it is the world’s oldest psychiatric hospital.

An inventory listing “six chains with locks and keys belonging to them, four pairs of iron manacles, five other chains of iron, and two pairs of stocks” gives an indication of the types of treatments that were used. Passers by would have been able to hear “the cryings, screechings, roarings, brawlings, shaking of chains, swearings, frettings, chafings” which were “so many, so hideous, so great that they are more able to drive a man that hath his wits rather than out of them.” It was described as nothing short of “hell.”

While the institution was originally attached to the church of St Mary of Bethlem, from the late 14th century its ownership became disputed. There was a tussle between the City and the Crown as to who got to appoint the Keeper (the master), until King Henry VIII granted that right to the former in 1547. It would become one of five Royal Hospitals of the City of London.

But in the aftermath of the Great Fire of 1666, Bethlem was declared to be “very old, weak & ruinous…” as well “too small & strait for keeping the great number of lunatics as are therein at present, and more are often needful to be sent thither…” Bethlem was on the move.

The governors opted to build a new hospital half a mile away from Bishopsgate at Moorfields, roughly where Finsbury Circus and Morgate station are today. Opened in 1676, the new Bethlem had an impressive façade and passers-by were said to be able to peer through the iron gratings at the institution’s “ornament and beauty.” Inside however, patients were locked in individual cells measuring around twelve feet by eight feet. Only some inmates were allowed out into galleries (day rooms) so they could move around.

But if you thought listing the third Bethlem in Bradshaw’s guide was intrusive, what went on at Moorfields (the second Bethlem) will come across as particularly shocking. Sightseers paid to watch the patients perform like zoo animals, with a correspondent writing in The World in 1753 that “to my great surprise, I found a hundred people at least, who having paid their two-pence a piece, were suffered unattended to run rioting up and down the wards, making sport and diversion of the miserable inhabitants.” William Hogarth captured this surreal form of entertainment in his 1735 work: “A Rake’s Progress.” 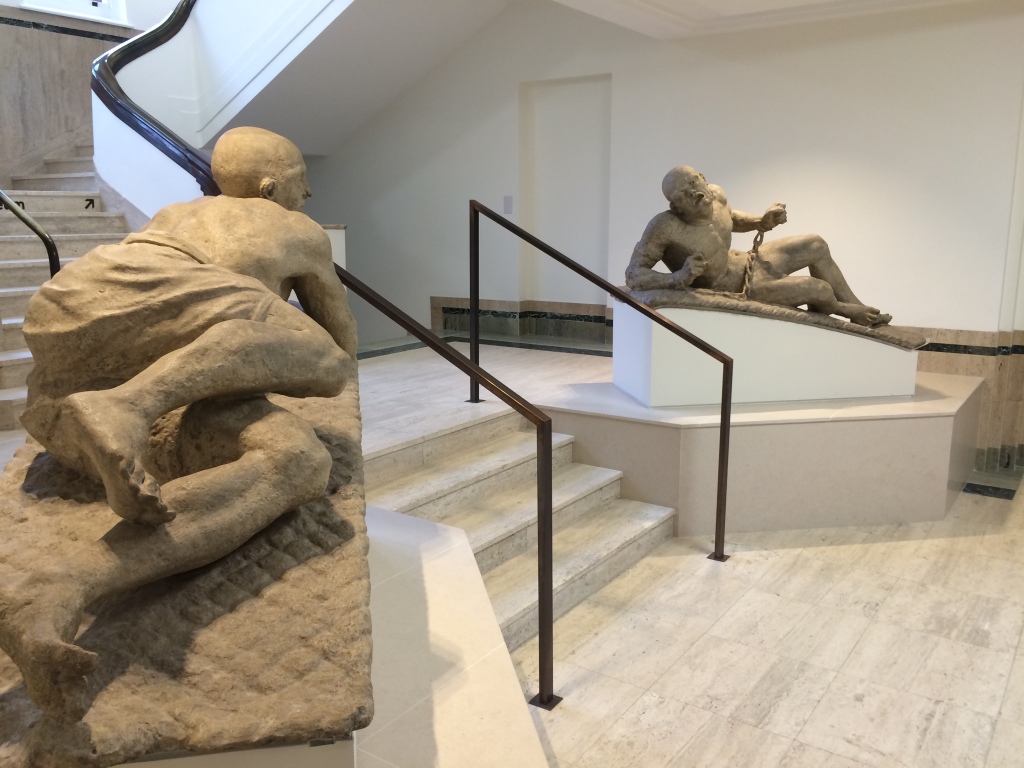 Stone figures by Caius Gabriel Cibbler, which became famous as “Raving and Melancholy Madess” (created for gateposts at second Bethlem Hospital at Moorfields)

Visits were formalised and restricted from 1770, but as my Bradshaw’s guide reveals they did continue.

Moorfields Bethlem may have looked impressive to visitors, but in truth it was poorly constructed – “hurried and put together with inconsiderate zeal, and more haste that provident wisdom.” The site it was built on was once part of the City Ditch and, having been constructed without foundations, the hospital started to crumble. Bethlem again need to find a new home.

The new Bethlem which opened in St George’s Fields in Lambeth was plainer than the one it replaced, but as modern day visitors to the Imperial War Museum will testify it is still an impressive building (although only the central part, which includes the dome, survives).“On entering the grand hall, the eye of the visitor is first attracted by the spacious staircase, which ascends from the ground floor to the council-chamber above,” noted the Bradshaw guide. Following the “passages run laterally through the building” took you to the separate male and female wards.

Bradshaw’s account noted that the “sleeping-rooms contain a low truckle bedstead, with chair and table, light and air being admitted through a small barred circular window at the top.” As with Moorfields, the cells were opened onto galleries where “patients can resort for exercise when the weather proves unfavourable” (there was also considerable space outside). Bethlem also included a chapel, workshops where inmates practiced trades and the dining room served food “which is of the best of its kind.”

In contrast to the terrible conditions at the two previous Bethlem hospitals, the Bradshaw guide was overall impressed with the one at St George’s Fields, noting: “The general aspect of the patients is that of extreme contentment….” and “Kindness is the only charm by which the attendants exert a mastery over the patients, and the influence thus possessed is most remarkable.” Although it should be pointed out that not all accounts of Bethlem at St George’s Fields were so positive.

But as the hospital had already found twice before in its history the 1920s Bethlem was again in desperate need of a new home. The 1815 building on St George’s Fields was outdated, yet given all the urban development that had sprung up in the surrounding area there was little room for constructing the new facilities that the institution and its patients required.

The governors therefore bought the Monks Orchard Estate, a 200 acre site in Beckenham, Kent (today a 15 minute bus ride away from the centre of Croydon). Designed as “villa” system, it was built as a series of self-contained, red-brick wards surrounded by greenery and a host of other buildings, including a chapel (with stained glass by William Morris), a recreation hall and facilities for staff. The new – and current – Bethlehem was opened by the Queen in July 1930.

I visited the Monks Orchard site at the weekend to visit the Museum of the Mind which has recently opened in the hospital’s grounds. As I walked past the various medical buildings to reach the exhibition, I got a sense of the greenery that must have impressed the governors in 1920s. Meandering along the tree-lined paths and taking in lungfulls of air, this uncluttered site seemed to me to be a long way from central London and is even further from the prison-like mental institutes of history books.

Inside the museum, there are some displays charting the history of Bethlehem back to 1247, but a greater emphasis is on the general change in attitudes to mental health and the treatments delivered. An isolation room – with padding and sparsely furnished to minimise risk of self-harm for vulnerable patients – has been mocked up. There are also a number of examples of clothing or devices to physically restrain patients (such as chains or strait jackets, items that declined in use following a damming parliamentary enquiry in 1815).

Panels also chart how mental health medications have become much more effective in recent decades (they were extremely limited in the 19th and early 20th century). The use of such drugs to restrain patients is of course highly controversial.

Inside main gallery at new Museum of the Mind

In the entrance hall, by the grand stone staircase leading up to the main gallery are two stone figures by Caius Gabriel Cibbler, which became famous as “Raving and Melancholy Madess.” They were originally made for the gateposts at the second Bethlem in Moorfields and the Bradshaw account reveals they were then moved to third site in St George’s Fields. Touring around the building you will also find a number of wooden collecting boxes – a reminder that before the foundation of the NHS the institution relied very much on charitable donations – and admission books, charting the patients who had used Bethlem, some of whom stayed for many years. 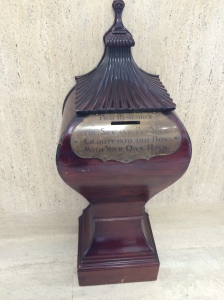 But if you hadn’t been told it was a museum dedicated to mental health, you could have thought you had arrived at an outpost of the Tate Modern. The history displays have been stylised and the galleries are filled with colourful pieces of modern art. Amazingly, the works have been created by mental health patients over the years – an important form of therapy that helps with recoveries.

Bethlem itself remains an important provider of mental health care and is now part of the South London and Maudsley NHS Foundation Trust. And while visitors no longer pay to watch mad people entertain, the opening of the new museum is certainly going to attract the crowds to Bethlem again. Perhaps Lonely Planet or Rough Guides will include the institution in their London books when they publish their next editions, just as the Bradshaw guide did all those years ago.

Gallery at Museum of the Mind 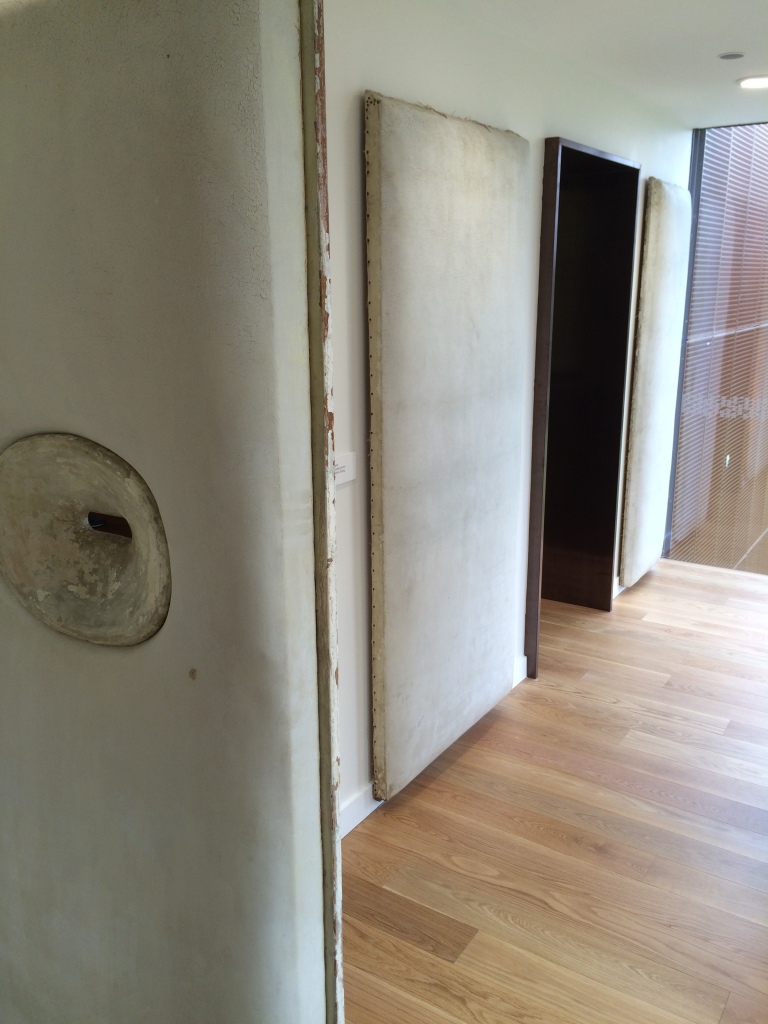 Mocked-up padded isolation room at Museum of the Mind

Tagged as: Bedlam, Bethlem, Featured, Museum of the Mind