Roman London in the second century AD would have been an impressive place to visit. Spanning both sides of the Thames, it was by then the largest city in Britain – a cosmopolitan settlement that was full of hustle and bustle.

The skyline was dominated by the forum-basilica, consisting of a large open rectangular piazza which was lined with stalls and surrounded by offices, shops and a 50 metre long church. It was the most important public building in any provincial town, and from it stretched homes, workshops, temples, bathhouses, an amphitheatre and a fort housing some one thousand soldiers.

Sadly little physical evidence remains of Londinium – the name given to Roman city – as a result of the considerable development of the City over the years (and the fact buildings from the period can often be eight metres below the present-day ground). But as I have found from exploring the area in recent weeks, all is not lost and there are some wonderful traces of the past to be seen thanks to archaeological digs conducted ahead of new buildings being erected.

Londinium was founded as a supply base at a point on the Thames that was narrow enough to be bridged yet still tidal and deep enough for large ships to dock soon after the invasion of Britain by a 40,000-strong Roman arm in 43AD. No evidence of a bridge has been found, yet in AD48 the roads on the south side of the river appear to have been re-routed to cross near today’s London Bridge, so archaeologists believe that there must have been a structure of sorts.

The centre of the early Roman city was on Cornhill, just to the east of the (now lost) Walbrook river on the north bank of the Thames and was dominated on the summit by a large gravelled courtyard which was used both a market square and a military assembly point. This was later replaced by the impressive forum-basilica complex, sections of which survive in the basements of buildings in the Gracechurch Street area of the City (and a portion of it is buried underneath Leadenhall Market). Depicted in a wonderful model in the Museum of London, it served as the town hall and law courts. 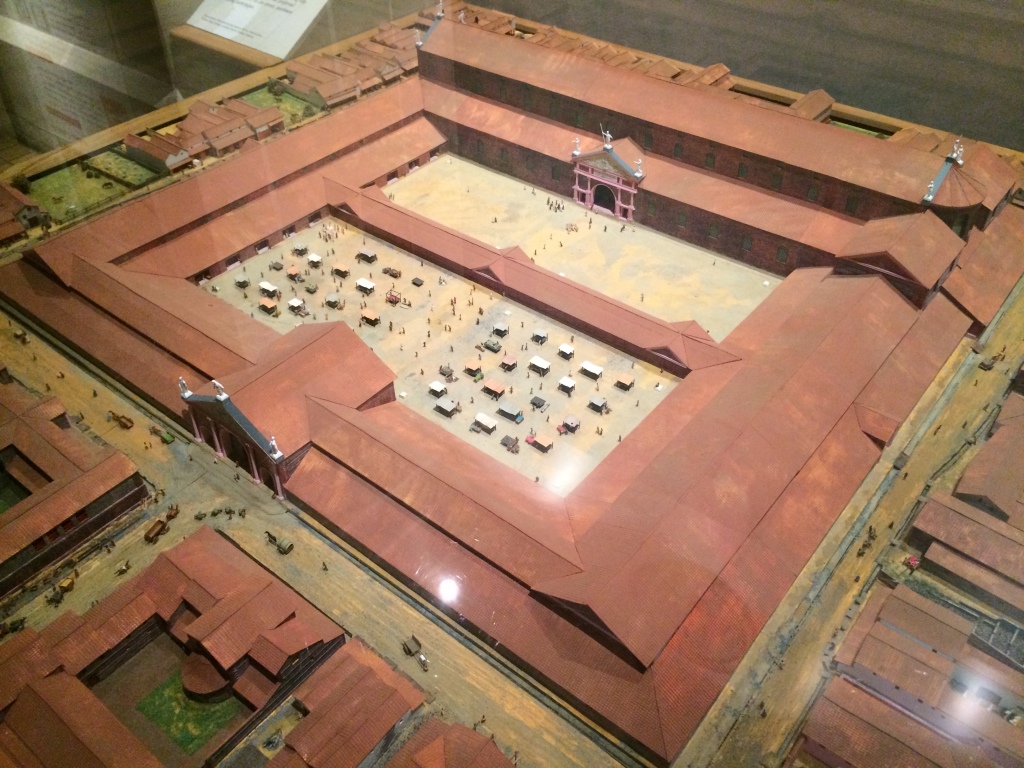 Construction soon began of the street that would form the east-west axis of the city and there was a wharf on the north side below the bridge. The southern terminus of the bridge – the “south work” or Southwark – was important enough for the Romans to establish a garrison there. In addition, suburbs with shops, workshops, taverns and smithies were established on roads to the south, east and west of Londinium.

But in 60AD Boudica – queen of the Iceni tribe – completely destroyed the town by setting fire to buildings while the Roman army was campaigning elsewhere. Only a decade earlier the Roman historian Tacitus had described the settlement as “crowded with merchants and goods,” so it was a bitter blow for Rome’s provincial project.

The Romans didn’t abandon hope for Londinium. In fact, after a decade long pause they set out to create something on a much grander scale. And within 50 years of Boudica’s attack it had grown to become the largest city in Britain. It is fascinating catching glimpses today of this exciting period as you explore London today.

Aside from the new forum-basilica (started in 70AD), much effort was put into building and extending bathhouses. They were seen as an important part of civilised Roman life, where citizens relaxed, socialised and cleaned themselves. One of these has been found at Huggin Hill, which clearly complied with Roman rules that meant women and men bathed separately in a series of rooms heated at increasingly warn temperatures. Unfortunately the site can’t be accessed, but the remains of another bathhouse – the Billingsgate house and baths in Lower Thames Street – can be visited in a basement of an office building on special open days (as I have written in a previous post).

One popular form of mass entertainment in Londinium was a visit to the amphitheatre. Although, unlike the exotic animals that were shipped to the Colosseum in Rome, the animals used here are likely to have been bulls, bears and wolves.

The first amphitheatre in Londinium was constructed in the city in around 70AD and made out of wood. Around 30 years later it was partly re-built out of stone, with decorative coloured plaster and Egyptian marble and would have been capable of holding 6,000 to 7,000 people (Londinium’s population rose to around 20,000 historians believe).

Excavations by the Guildhall in 1988 excitedly uncovered the eastern entrance and a curved arena wall of the city’s amphitheatre. The stone would have supported a timber frame with tiers of seating for spectators. And a wooden drainage system – which would have run through the main arena collecting rubbish and silt – survives, the very fact it was wet here helped to preserve it.

Descending to the basement of the Guildhall Art Gallery allows you to see the traces of the structure. Entering a darkened room, you can take in the surviving Roman stone work, while clever lighting techniques have been use to project the rest of the amphitheatre into the room. And as visitors enter through one of the original entrances, it feels like you are actually walking into the arena. 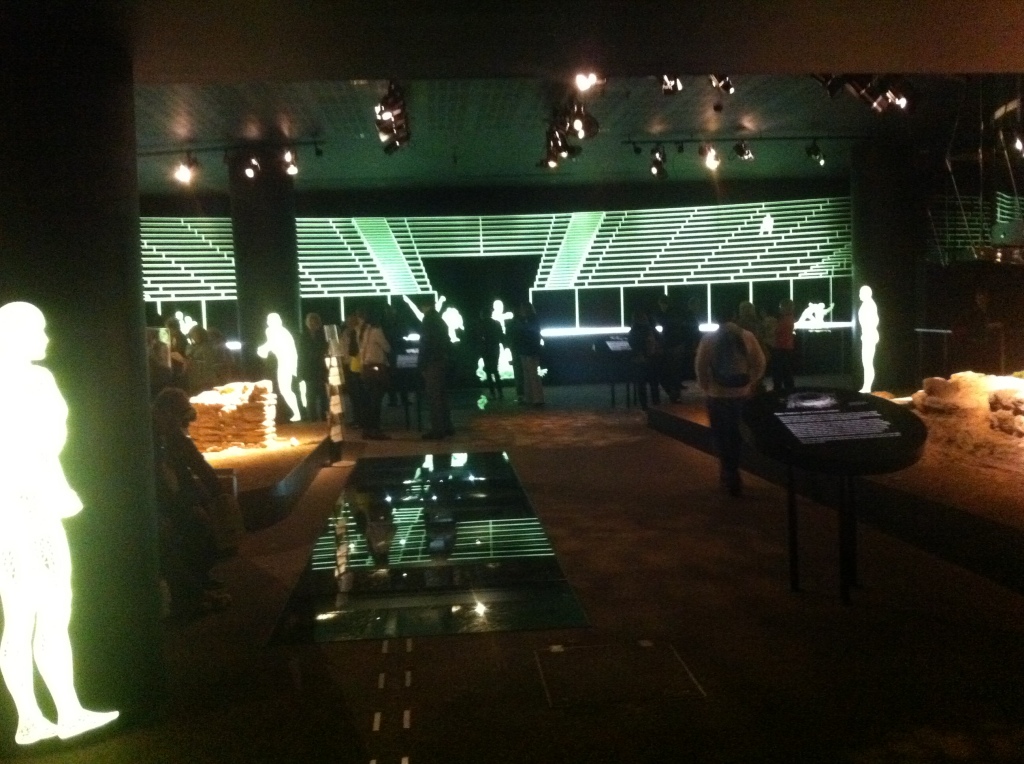 Two small antechambers – located on either side of the entranceway – can clearly be seen. Archaeologists believe they may have been waiting rooms for those entering the arena. Slots cut into one of them suggest there may have timber sliding trap-door allowing wild animals to be released into the main amphitheatre.

Outside, coloured flagstones in the Guildhall Yard have been used to show the position where the amphitheatre’s arena was. And the space is often used for re-enactments. The structure has also had an impact on the development of the surrounding area – neighbouring streets are curved, a surviving reminder of Londinium.

But Roman London was also very much a thriving town, with a strong service economy consisting of carpenters, metal-workers, shopkeepers and many others. Considerable remains of the products made – and the waste resulting from manufacturing – has been found by archaeologists. The Museum of London has mocked up a street in its Roman gallery, where tools and finished goods are displayed. 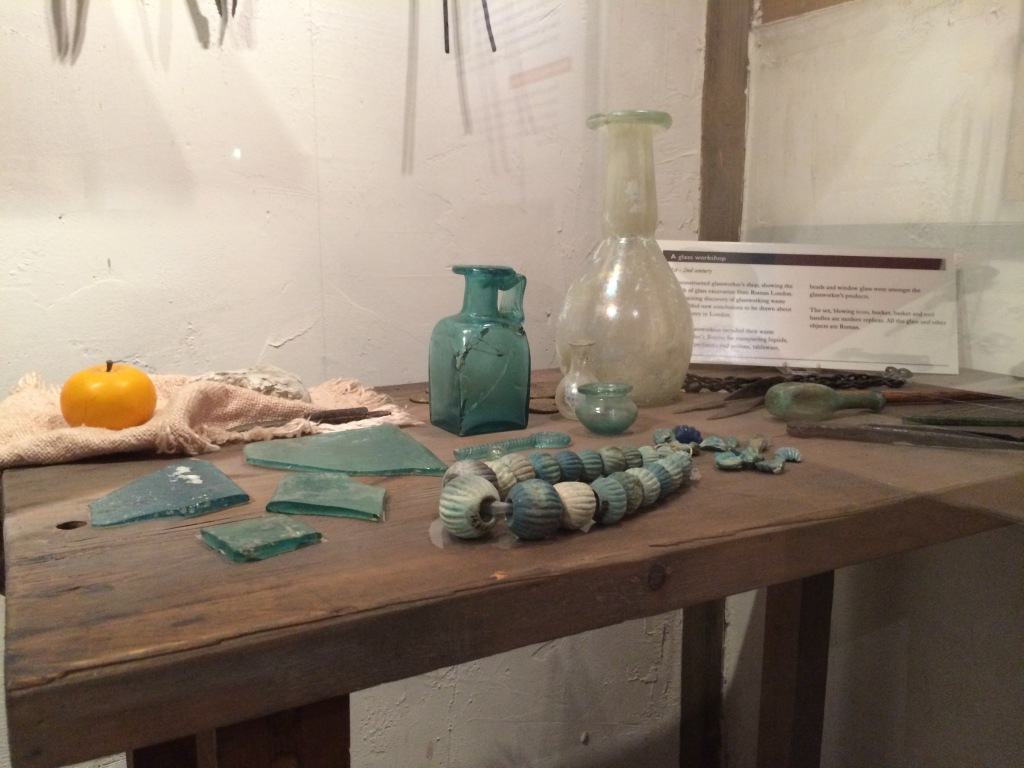 Mock-up of Roman glass workshop at the Museum of London (glass and other objects are original).

And there was a thriving port. Ships containing goods from across the Empire were brought to timber quays – which ran along the line of today’s Upper and Lower Thames Street (from Cannon Street Station to Custom House – and unloaded at timber warehouses. The remains of two boats have been found preserved in the mud of The Thames over the last century of so (a Mediterranean-style ship at County Hall in 1912 and the other at Blackfriars in 1965).

In around 120AD a fort covering some 12 acres was built to the north-west of the main settlement. Traces of the structure – which was almost square and had rounded corners – were discovered when the gloomy London Wall road was constructed. Its shape can be clearly through some preserved remains in gardens to the east of the Museum of London.

West gate of the Roman fort – reached through an underground car park.

But the real highlight can only be visited on special open days. The west gate of the fort is now housed in what through looks like a cupboard off an underground car park. Walking into this closed off area, you get a wonderful sense of what the structure must have looked like, even though only foundations have remained.

Archaeologists believe that the barracks could have housed up to a thousand men. But it was decommissioned and buildings dismantled around only a century after it was established when the military strategy was changed and men were moved away from the capital.

But in about 200AD a city wall stretching for nearly three miles – from modern-day Blackfriars in the west to the Tower of London in the east – was built encircling Roman London on its northern side. More than one million blocks of ragstone was brought up the Thames on some 1750 boat loads from quarries in Kent for the structure. And the wall was some 1.2 metres thick and 4.5 metres.

One of the most popular surviving sections with tourists is in the shady courtyard of a hotel near Tower Hill Underground station. But if you look a little harder there are other examples worth tracking down, particularly not least in an underground car park behind the Museum of London and near Moorgate Underground station.

Later on, after around 350AD some 22 semi-circular towers were added to the eastern section of the city wall to provide platforms for catapult machines. While the bases survive, the most visible remains – which can actually be seen through the window at the Museum of London’s Roman gallery – are ones that were built during medieval times (when additions and repairs were made to the wall overhaul).

The main gates built into the wall were: Aldgate (the road to Colchester), Bishopsgate (Ermine Street to York), Newgate (the road to Silchester) and Ludgate (the road to the south-west). In addition, two lesser gates from the Roman fort (one known as Cripplegate) were constructed. Aldersgate was added in the later Roman period. The main gates survived in some form until road widening schemes in the 17th and 18th centuries.

Today, you can re-trace the position of the wall through a self-guided walk called the London Wall Walk. Information panels guide you around the footprint of the old structure. And while masonry traces aren’t always visible, it’s a great way to get a feel of Roman London. 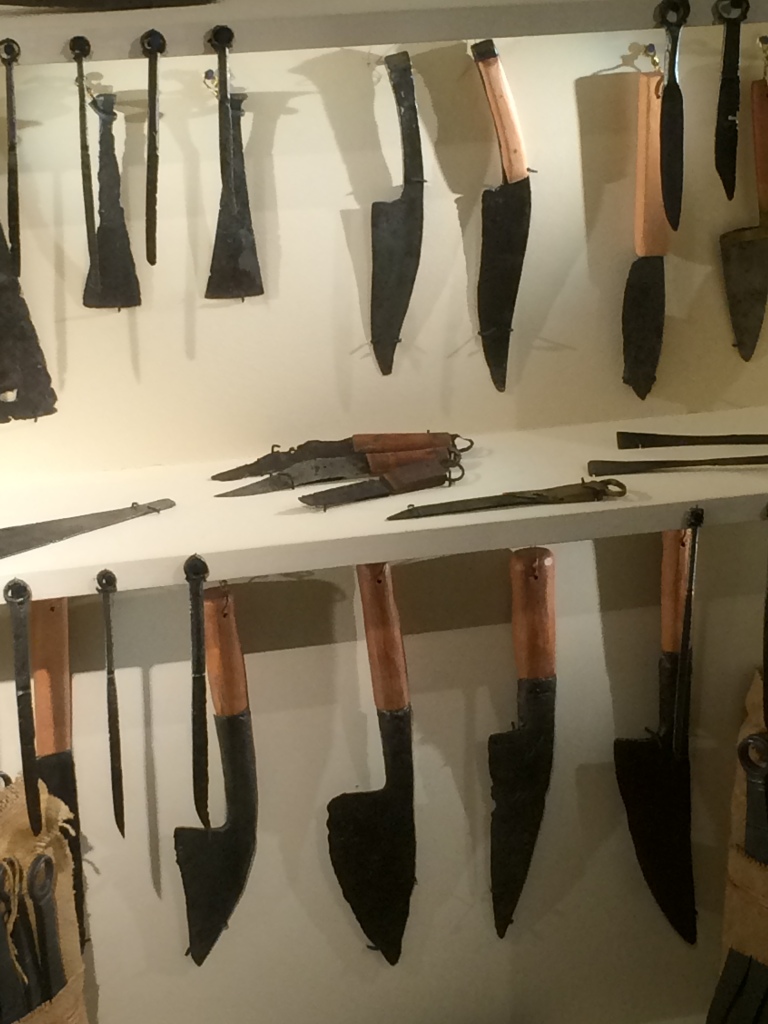 Mock-up of cutler’s stall at the Museum of London (most of the knives and tools are original). 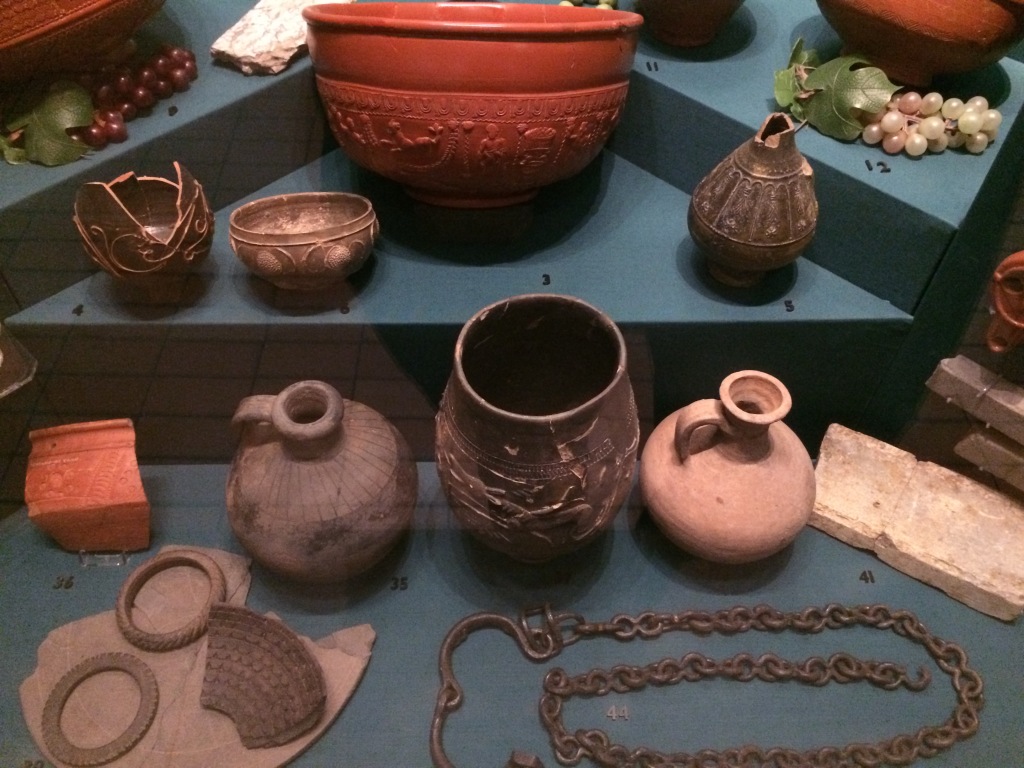