Abbey Mills Pumping Station cuts a striking impression on the east London skyline. The palatial Victorian monument near Stratford will be familiar to many given it has featured on both the small and big screens in everything from Batman to The Bill, but there is nothing quite like seeing it up close, in real life.

Built in 1868 by the celebrated engineer Joseph Bazalgette, Abbey Mills is of cathedral-like proportions and seems closer to a medieval castle given its turrets and tower than a Grade II* listed industrial building used by a utility organisation. And although a shiny silver replacement facility was opened nearby in 1996, it still retains operational electric pumps which act as a reserve should the new one fail or become overwhelmed (during heaving storms for example). It is used around 30 days a year.

The construction of Abbey Mills dates back to when Bazalgette was constructing a new sewer system in the 1860s to carry the increasing amount of waste produced in London away from the centre. Sanitation in the capital in early 19th century was little different to that of medieval times, with cesspools beneath some 200,000 houses and in poorer homes effluent appeared through wooden floorboards.

The initial solution from the Metropolitan Commission of Sewers was that all privy refuse would be discharged directly into the sewers, but as the effluent ended up in the Thames, Disraeli said the river had become “a stygian pool reeking with ineffable and unbearable horror”. Many also took their drinking water for the Thames, so this method posed a health hazard.

In 1855 the Metropolitan Board of Works was established to come up with a much more drastic solution which three years later saw Bazalgette start work on what the Observer called “the most extensive and wonderful work of modern times”. It involved building 1,300 miles of sewers (and the Chelsea and Albert embankments), which until recently when, Thames water began a modernisation project, little had changed since Victorian times.

But as Bazalgette’s design operated using gravity, by the time sewage had reached the East End it was a considerable distance underground, so steam-powered pumping stations needed to be built. This was the role performed by Abbey Mills.

Pictures taken by Londoners in recent years show that the interiors of the building are just as ornate as the exterior and there is extensive use of ironwork. The structure – of which the main building is designed like a Byzantine church and features a Slavic dome – is celebrated in an article in The Islington Gazette in 1868 at the time of its opening:

“A chance visitor to the neighbourhood of the works—if chance visitors can ever be supposed to find their way to that singularly uninviting neighbourhood—would be astonished at finding that that smart but queer-looking building—something between orphan school and a reformatory—was the Abbey Mills sewage pumping station.”

In a piece going into immense detail about the technical design, the Islington Gazette article also gives considerable insight about its appearance:

“Both inside and outside the building no expense appears to have been spared. Inside the ornamentation partakes somewhat of the character of that of the Alhambra court of the Crystal Palace, there profusion of giving, encaustic tiling, and some stained glass windows. Some portions of the outside of the building are also gilded.”

But spending so much money on the design in an area that people didn’t generally visit was scrutinised by the Islington Gazette editorial:

“Loud complaints were made by the visitors on Tuesday of the extravagance the Board in thus ornamenting a building set in marsh. There seemed to general opinion that if such ornament were placed on and in a building erected where a considerable section of the community could have opportunity viewing it, the expenditure would have been most proper; but that, in the present case, was a sheer waste the ratepayers’ money.”

Two Moorish styled chimneys – redundant since steam power had been replaced by electric motors in 1933 – were demolished in 1941 when there was the worry they may be hit by Nazi bombing raids and cause damage to the pumping station (one of the chimneys is apparently still in the grounds).

Abbey Mills is one of the highlights – it not the highlight – of The Greenway, a splendid six mile raised walking and cycling route that runs from Hackney to Beckton, providing great views of Olympic Park, Canary Wharf and beyond. Staying with our theme of sewage, the tarmac path has actually been created on top of the Northern Outfall Sewage Embankment. It is in Beckton that the waste is treated before being released into the Thames.

Walking along the path – which is extremely popular with cyclists and joggers – you are up close to everyday London life. There were the cheers and screams from youngsters enjoying football and rugby games on sports pitches. Elsewhere the mood was more sombre as you see people visiting graves of loves ones in cemeteries. I also passed hospitals and schools, which seemed quiet when I visited, but no doubt they are bustling at other times.

But what I saw most during my walk was people’s houses – everything from Victorian terraced properties (with a whole manner of extensions tacked on the back and additional storeys added on) to modern box-like buildings. For the most part, it was the residents’ gardens that were closest to the path and – as it was a sunny day – people were making the most of their outdoor spaces. Some were gardening, children were trampolining or kicking a ball about, and others were simply sitting down with a newspaper. 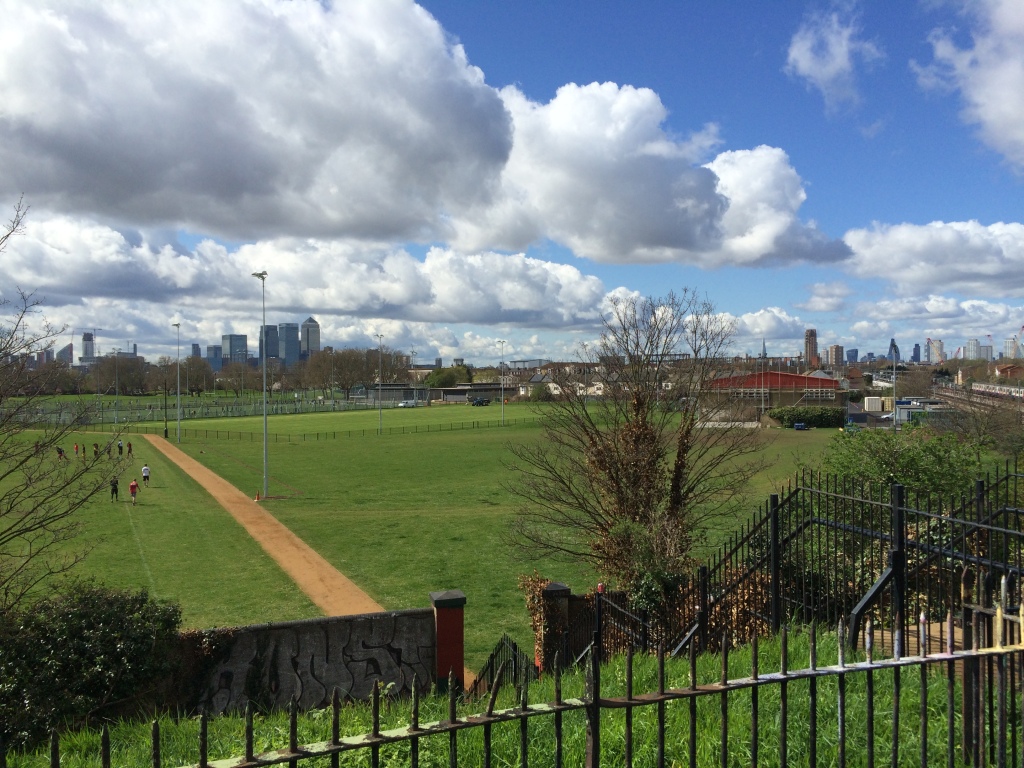 View from the Greenway

The occasional bouts of bad odour and rush watering running underground in drains, reminded me from time to time that sewage was running below my feet.

I walked along about three miles of The Greenway as part of a much bigger challenge to walk the Capital Ring, a 78 mile sign-posted trail that loops round the outskirts of London. I started this leg in Hackney Wick – where some months earlier I had found a leaflet about the route on a coffee shop table – and ended up at Cyprus DLR station.

For the most part, I found the trail well-marked. But there were times (particularly when the intended path was closed off and there was a diversion) that I was left a little lost and needed to reach for the map on my smart phone. The Greenway was the highlight of this first leg, but I did also come across a number of other interesting little parks. Thankfully there were only a couple of occasions where I found myself up close to hectic      dual carriage-ways.

Before jumping on the DLR at Cyprus, the Capital Ring route took me through Beckton District Park. This wonderful vast expanse of greenery seemed to stretch for miles and included a pleasant pond and children were enjoying a playground. It would have been nice if there was a café that had been open where I could have stopped for a cup of tea.

Visiting the park was a reminder that, even though it’s an extremely busy city, there are plenty of opportunities in London to get a lungful of fresh air. In fact, walking through this part of London I found time and time again clusters of houses facing on to greenery. The pleasant scenery was a fitting distraction to the fact that I had spent most of my day walking above sewage!

My trip along the Capital Ring continues next Thursday on Pastinthepresent.net when I walk from Cyprus DLR to Woolwich Foot Tunnel. 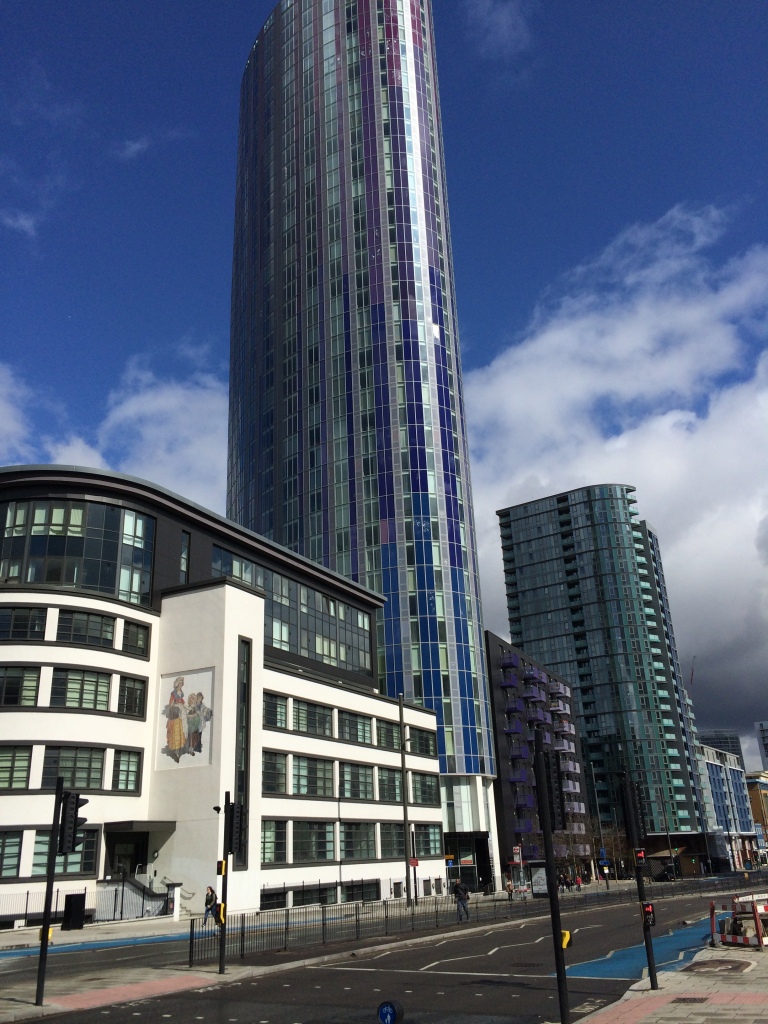