“Another tough day in Africa,” said our host, as we charged our glasses on the terrace before a lavish dinner. There may have just been an immense downpour of rain, combined with thunder and lighting, but fellow guests didn’t seem deterred and – in the dry under the veranda – continued to share their stories of travelling around the world.

Conversation soon turned to encounters on game reserves and the narrow escapes people had had at the hands of wild animals. This topic was hardly surprising given that we were on one, surrounded by numerous birds, zebras, giraffes, buffalos and other animals. On a sunny afternoon walk to the craggy rock face that leads down to the Buffalo River we had been able to get up close and take photos of these postcard-perfect animals.

Beautiful as Fugitives’ Drift is, we weren’t just here for the wildlife however. For more than a century ago, in 1879, it was in this area that the British fought perhaps the most important battles of the war against the Zulus. 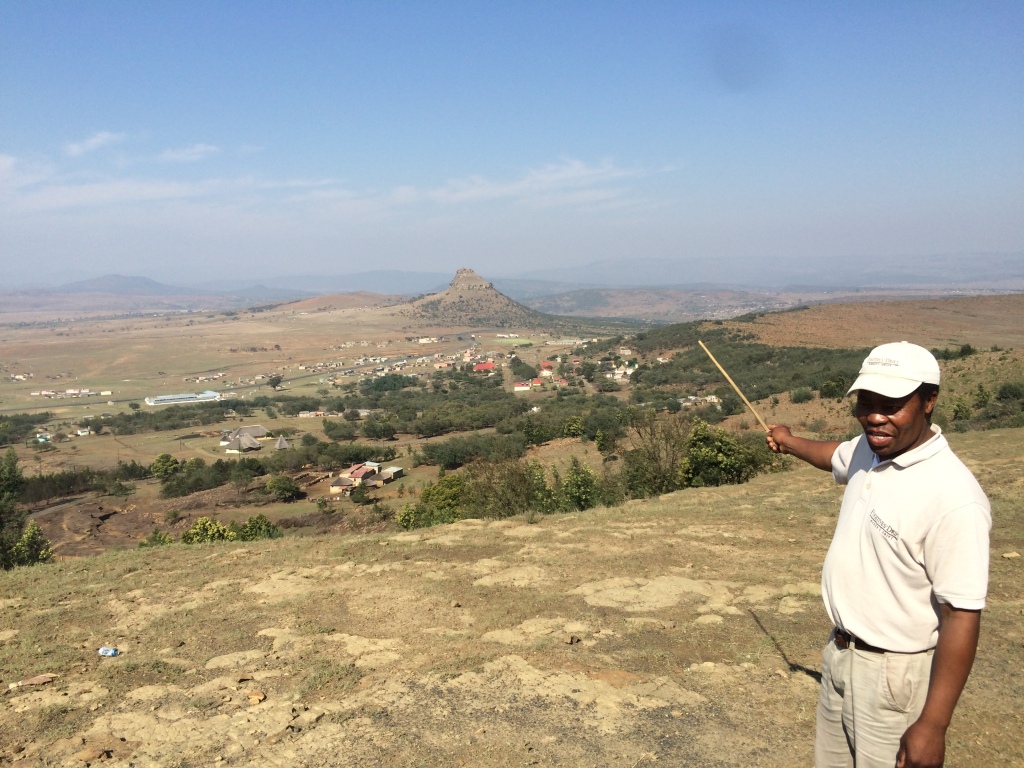 Our guide looks down onto Isandlwana

Back in 1824, things were considerably more cordial with the Zulus when king Shaka gave a portion of Zululand to the British so they could found a new settlement, which they named Durban. The Zulus would live on one side of the Buffalo and the British on the other, in what was known as Natal colony and established in 1843.

The Zulus suffered a major defeat at so-called Blood River at the hands of the Boers in 1838, but the army still remained powerful.

As diamond mining in Kimberley in the west grew in importance, some in the British camp became interested in taking over Zululand so they had a protected route to the port of Durban on the shores of the Indian Ocean. They believed the Zulus were becoming hostile and were ready to wage war on Britain’s colonies.

Officially, the British government didn’t want to start a war with the Zulus, so the high commissioner Sir Bartle Frere, who had been sent to South Africa to confederalise the different colonies (as he had successfully done in Canada) needed a more subtle plan. Troops were moved from the Cape under the pretext that Zulus were planning to invade Natal, but Frere made the highly unreasonable ultimatum in December 1878 for the Zulus to disband their army in 30 days, which of course their king, Cetshwayo couldn’t agree to. It was seen by the Zulus as unfairly interfering in their traditional way of life.

Unsurprising, the Zulus missed the deadline, so Frere briefed General Lord Chelmsford to invade Zululand. War was imminent as 18,000 men amassed along the border ready for invasion.

The morning after the stormy night before, the birds were singing and the sun was out in force against, as we woke early for our first battlefield tour.

We headed from Fugitives’ Drift with our guide in a Land Rover, crossing the Tugela River at the very point at Rorke’s Drift where Chelmsford brought his men into Zululand on 11th January 1879. The late David Rattray’s (he was the owner of Fugitives’ Drift lodge, but tragically was murdered during a botched burglary in 2007) CDs describing the build up to the battle were played as we travelled along the dirt track on our way to Isandlwana.

Our trip focused on this important battle which turned out to be Britain’s worst ever colonial military defeat. On the 22nd January 1879, more than 1360 British soldiers were virtually wiped out at the hands of some 25,000 Zulu warriors armed with spears.

From a viewpoint overlooking the open battlefield where the terrible events unfolded, our animated guide Mphiwa Ntanzi – a Zulu, whose great grandfather had fought in 1879 – was able to point out why things had gone so wrong for the British.

Chelmsford had decided to set up camp beneath the giant rocky outcrop that was Isandlwana on the night of 21st January. But going against the warnings of others, no defences were built because he said there wasn’t time.

At dawn on the 22nd January, Chelmsford led three quarters of the central column away from Isandlwana to support another unit, leaving the small British group to fend for themselves. He dismissed reports that Zulus were advancing on the British camp and continued his march away from them as planned.

Some say it was arrogance on the part of the British more than anything that cost them the battle, showing little respect for the warriors with spears. Chelmsford failed to place scouts on the surrounding mountains to spot where the Zulu forces were located. Had he done so, he would have found them hiding around the brow of the hill and many British lives could have been saved.

After exploring a small museum which explains the sequences of events at Isandlwana, we entered the battlefield itself. We sat under a tree and listened as our guide told the story of that day – tales which had been passed down from generation to generation. It seemed just as desolate as it was back in 1879.

But rather the 850 tents that made up the British camp, in front of us were white-painted cairns and war memorials remembering the fallen.

For those British soldiers who first discovered the 25,000 Zulu warriors sitting in complete silence in the field it must have been a terrifying sight. In keeping with their traditions, they were waiting for the moon to change position before attacking. But once they saw they had been spotted they got into their “horns of a buffalo formation” (the shape of a giant Zulu memorial on the battlefield to remember the three thousand plus of their people that were killed) and outflanked the British. 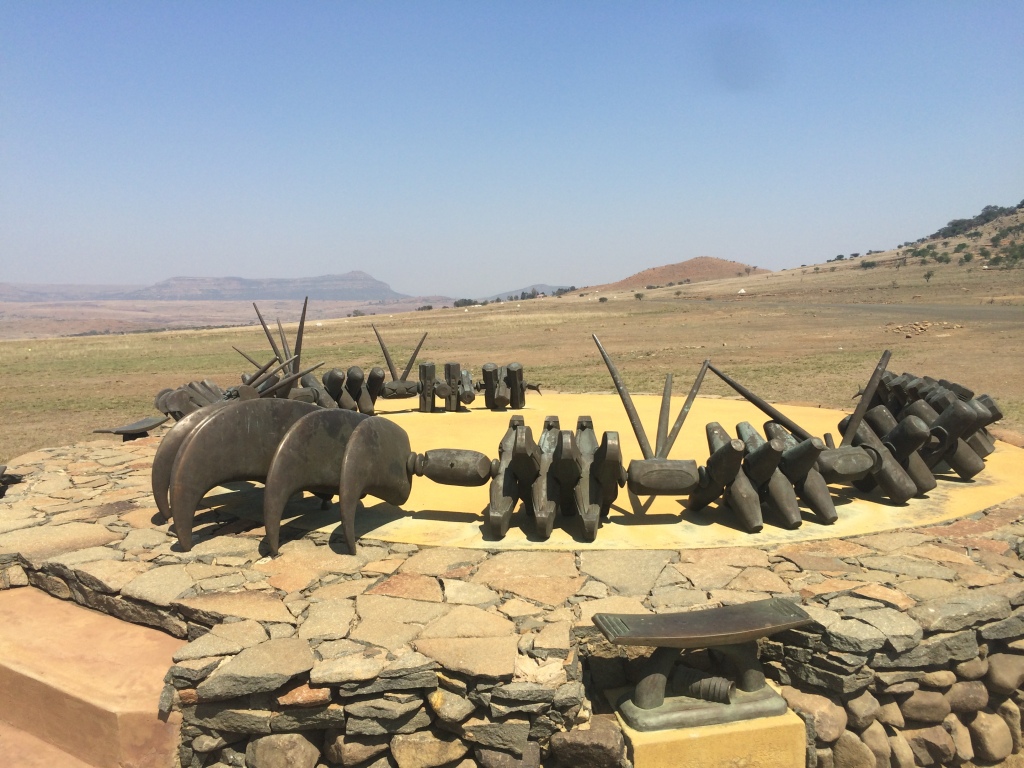 Zulu memorial on the battlefield

The British soldiers were disembowelled and their throats cut, which the Zulus believed released the spirit of the dead. All Zulus were keen to “wash his spear” in the blood of enemies so they could prove their manhood and be allowed to marry, something that those who had fought at Isandlwana had waited more than 20 years for.

Two British men who fought at the battle earned the first ever awarded posthumous Victoria Crosses for their efforts. Lieutenants Melvill and Coghill were killed just a short walk from Fugitives’ Drift lodge as they tried to save the Queen’s Colour of their regiment. They are remembered by a memorial in a small gated area to protect it from animals. 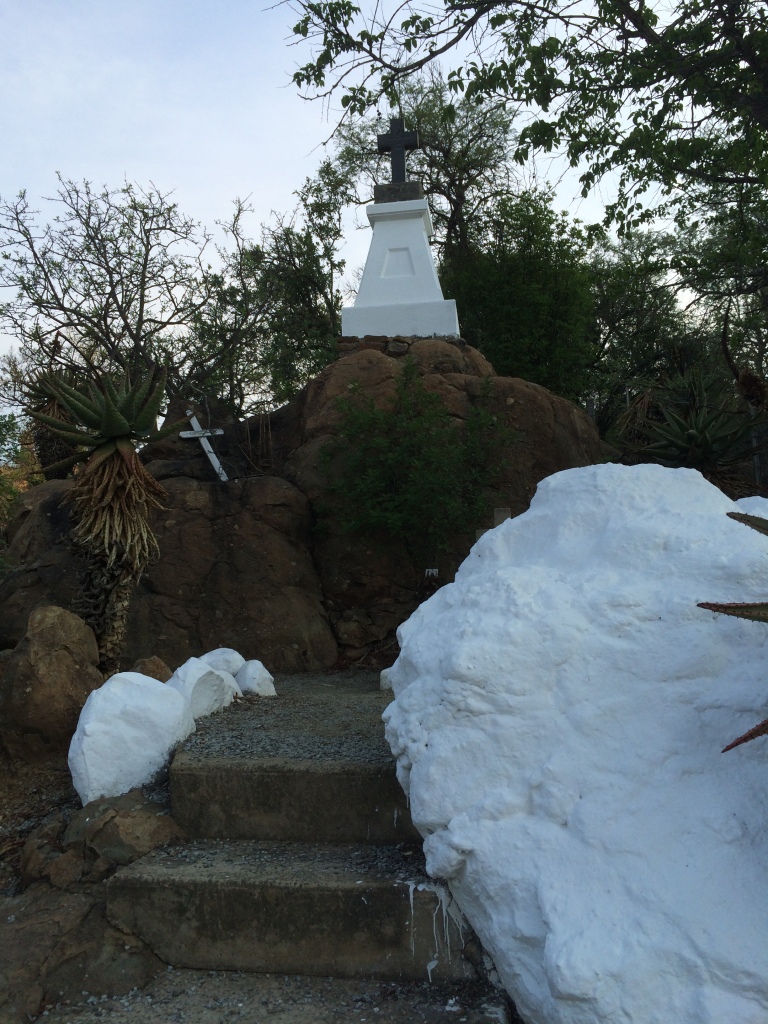 Graves of Lieutenants Melvill and Coghill

But after the humiliation of Isandlwana, later the same day just over one hundred British soldiers managed to win a victory over some four thousand Zulus at Rorke’s Drift, the battlefield closer to the lodge where we stayed. Oliver Clark’s guest post on this battle will be published here on Thursday.