With rubbish strewn on the roadside, lorries thundering by to waste incinerator plants, distribution centres and oil storage depots, this is hardly the most picturesque part of London.

Exploring on a Saturday morning, there are not many souls about as I weave my way around this desolate area on the north bank of the Thames. Yet developers are hoping that this will change in the coming years and, what is being billed as Barking Riverside, will become a thriving self-contained area of London the size of Windsor.

Once complete, the development is expected to have more than 10,000 homes, which will be accompanied by shops, restaurants, schools and other amenities. And approval has recently been granted to extend the Gospel Oak to Barking Overground line to Barking Riverside.

But right now you need a lot of imagination to see this new part of the capital truly taking off. We are after all just across the water from Thameside, an ill-fated estate that struggled to get going many years ago. For the first people who moved to Barking Riverside from the 1990s onwards there are many parallels in what has been claimed to be London’s most isolated suburb – residents only recently got a shop, yet they still need to travel to visit a doctor or for children to go to school.

The white-washed show home for one development by PopUpHomes looks somewhat out of place surrounded by industry on all sides. But they’ve made an effort with adding wooden signs pointing to attractions such as the local bus stop and Dagenham Dock train station. Sadly anyone taking the walk will find that it not to be very picturesque at present.

As you get closer to the river itself, the setting is more pleasant and a footpath passes a large mound where London clay spoils from the building of the Bakerloo Underground line were dumped. It leads to a grassy bank where on a sunny day you can enjoy a picnic.

There is also a sprawling marketing suite for Barking Riverside built out of grey container crates, although there were hardly long lines of people wanting to put their names down to re-locate here (which was lucky as it was closed, although the security guard did allow me to use the toilet block). It’s just round the corner from Dagenham Sunday market which draws in some 15,000 visitors every week to take in the more than 600 stalls, according to its website. 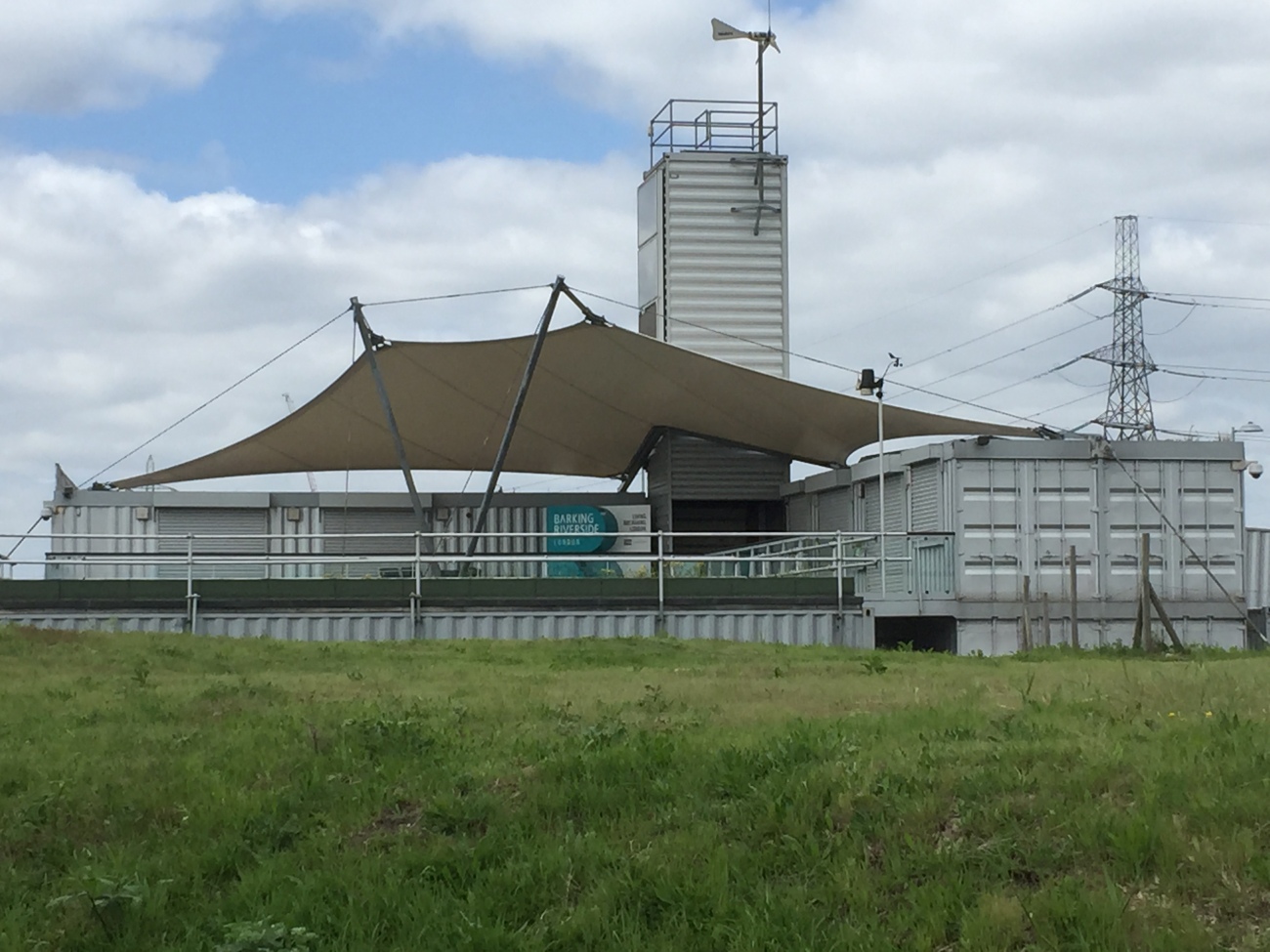 Anyone moving here will need to like the sight of electricity pylons and indeed the constant hum of Barking Power station, originally built in the 1920s and once the largest in the country (although, now in its third incarnation, a shadow of its former self and in fact Barking Riverside is being built on the site of the old ones). Quite why anyone would want to sit out on a balcony of the apartments (as I saw with a block already completed) is beyond me.

But Barking Riverside is by no means the first residential development in the area. Breach Road leads to Dagenham Breach, a lake created in 1707 when the sea wall was breached and marsh land was flooded. Daniel Defoe visited the area in 1722:

“We saw, passing from Barking to Dagenham, the famous breach, made by an inundation of the Thames, which was so great as that it laid near 5,000 acres of land under water, but which after near ten years lying under water, and being several times blown up, has been at last effectually stopped by the application of Captain Perry, the gentleman who, for several years, had been employed in the Czar of Muscovy’s works, at Veronitza, on the River Don. This breach appeared now effectually made up, and they assured us that the new work, where the breach was, is by much esteemed the strongest of all the sea walls in that level.”

Londoners travelled by boat to enjoy a day out at what was then a picturesque spot where fishing was popular. But others kept homes (which have all sadly vanished) here. Elizabeth Fry – the prisoner reformer – took a lease on two fishing cottages at Dagenham Breach and spent many summer holidays there. Her daughter Katharine wrote that “It is difficult to convey the sort of enjoyment Dagenham afforded us…There was fishing, boating, driving and riding inland by day, and when night closed in over the wild marsh scenery the cries of water birds, the rustling of the great beds of reeds, the strange sounds from the shipping on the river, gave the place an indescribable charm”.

Over the years more industry was brought here. Sir John Rennie built the first jetty at Dagenham dock in 1865 boats were unloaded here, before the cargo was transported to trains to central London. Although it saved time for shipping companies given the congestion on the Thames in central London, the scheme went bankrupt.

Samuel Williams then developed the site from 1887 and Dagenham Dock would go on to stretch to 30 acres. The pier that can be seen today dates from the 1950s and serves an oil storage terminal.

The peace was disturbed by the opening of England’s first organised flying ground on land leased from Samuel Williams by the Aeronautical Society of Great Britain in 1909. They wanted a secret spot away from central London and the site had hangars (one housing a ballroom) and a clubhouse. Baden Baden Powell (brother of the founder of the scouts) was one of the pilots who conducted trials at Dagenham. The anglers would have been happy then that it was short-lived and not very successful, partly on account of the rough ground.

Slightly further west, little remains of Creekmouth. The hamlet was built by John Bennett Lawes in the 1850s to house those working at the nearby Lawes Chemical and Fertiliser Company – one of the first places in the world to manufacture artificial fertilisers. There is a wonderful colourful mural, created thanks partly to a Heritage Lottery grant, showing what Creekmouth was like in its heyday, with two rows of houses, a school, church and pub.

It was cut off from the rest of Barking by marshland and was a dangerous place given that gun powder was stored nearby. Once Beckton sewage works opened, the smell must also have been horrendous. But for the residents who lived there and the visitors who came for the day, for many it was a joyful place, as the excellent Creekmouth Preservation Society website notes in an account of a trip from Westminster Gardens:

“Creekmouth was like Southend to us, a nice place for a day out! Mum used to make rock cakes for us to take, and we would have big bottles of Lemonade with stoppers in. I don`t remember seeing any men at Creekmouth only women! I suppose all the men were out at work. The ladies wore long black dresses, white pinafores and little bonnets. They would sit by their front doors knitting and crocheting, they were always friendly towards us children. They gave us water from the stand pipe to fill our lemonade bottles”.

While the hamlet was largely abandoned following the devastating Great Flood of 1953 some traces – including its post box – remain. The Victorian-built school building is now occupied by QUIBB, a demolition firm. And the Crooked Billet Inn which has a history dating back to 18th century (the present building was erected in 1925) and was where those working in the Barking fishing industry had their last drink before heading to the North Sea. It now trades as the River Restaurant and is a popular venue for Romanian weddings. Standing on a nearby grassy mound, I found it surreal looking across dumper trucks parked up to see that that flowery arches were being set up for a celebration given that we were in the middle of nowhere. 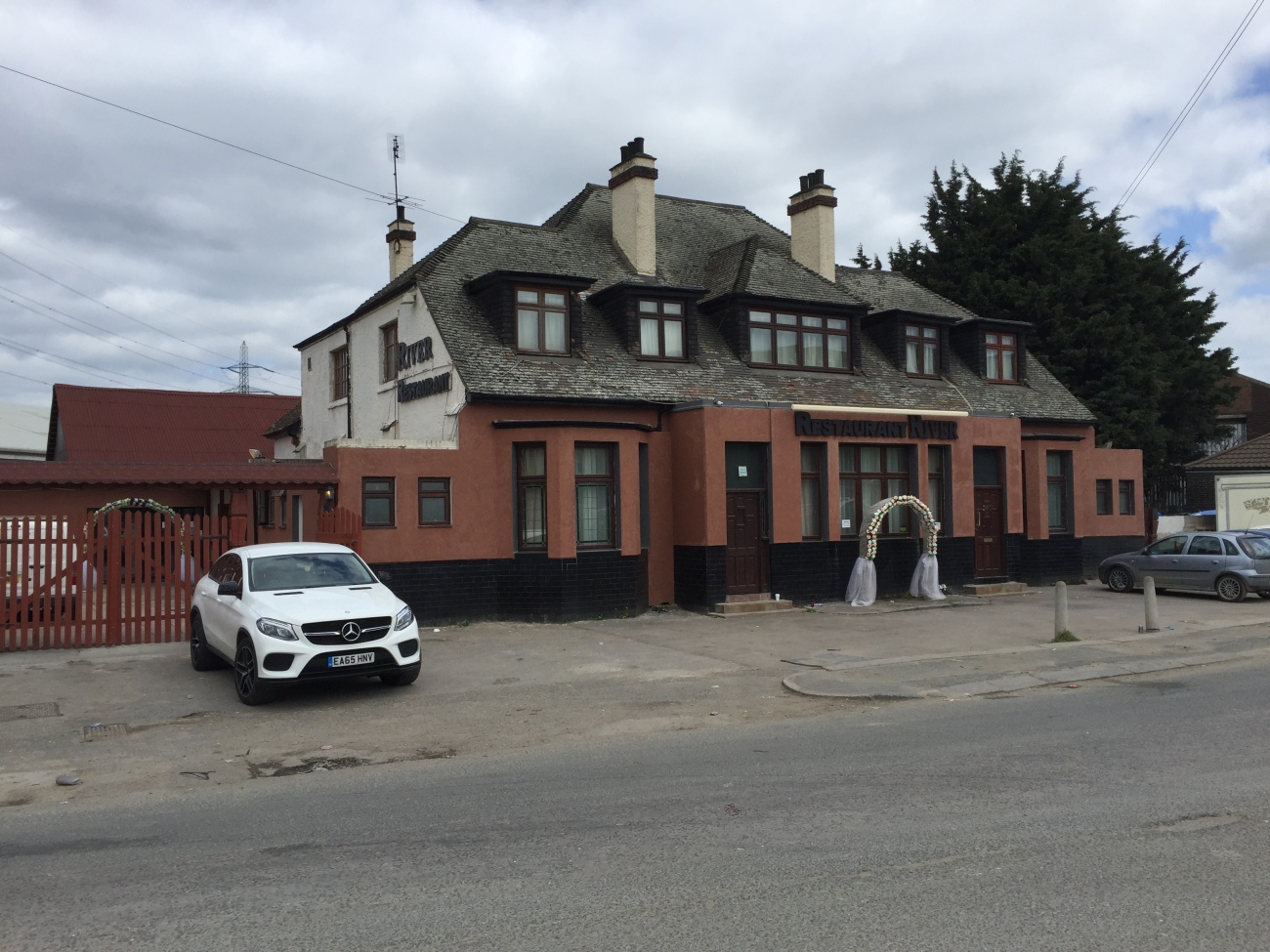 Given the history of flooding, Barking Barrier was designed and built between 1979 and 1983 and is now a distinctive feature on the Creekmouth and Thames Ward skyline. Standing above Barking Creek and lying next to what once would have been Creekmouth’s village green, the main barrier and smaller gates take 45 minutes to descend so that the area is protected.

The most famous employer in the area’s history to many people is the Ford motor company. Its first factory opened in Dagenham in 1931 and the manufacturer at its height (in 1953) employed 40,000 people. Today, only around 2,000 employees remain producing engines, rather than full cars. You can see a disused Ford factory immediately as you exit Dagenham Dock train station.

Given the work that needed to be done brining the site up-to-scratch (it was marshy land before Ford arrived and considerable infrastructure, such as railways needed to be built) it was a huge investment. Tourists came by boat from London to visit the new factory. And Ford had a ready supply of labour thanks to the nearby Becontree estate.

Ford’s story in Dagenham has become pretty famous, not least through films such as Made In Dagenham which charts the story behind the infamous 1968 strike when female workers walked out in protest over sexual discrimination. But its bygone places such as Creekmouth and Dagenham Breach that are not as well-known and deserve to be discovered. How Barking Riverside fares in London’s history is still to be decided.