Bermondsey Street is a busy stretch of upmarket cafes, galleries and craft shops that is gentrifying fast.

Lying in the shadow of the Shard, it’s an area of prime real estate, with developers sitting on vacant properties waiting for prices to rise as the ambitious re-building of London Bridge station nears closer to completion.

It is little more than five or ten minutes walk from the Thames and then the City to its immediate north, yet despite having lived in London for five years this is an area of the capital that until very recently was unfamiliar to me.

I recently went to the fantastic Simon the Tanner pub and an enjoyed a Sunday roast (although to CAMRA fans it’s more famous for its quality and choice of ales), then had a coffee in a historic spot (more of which later) on nearby Bermondsey Street.

But I wanted to know more about the origins of the a area, so I signed up for a guided walk with knowledgeable Ken Titmuss (aka the Old Map Man) who brings to life not-so-known corners of London through the power of old maps.

Right now is a fascinating time to go exploring in Bermondsey given that gentrification is in progress, rather than complete, as is the case in other parts of London. So alongside the expensive coffees and delis, there are traditional barbers and caffs on Bermondsey Street where you can get a full English breakfast.

But with rising rents, how long will these no frills places survive for?

Going on a walk with Ken (I’ve been on a few over the years) reveals fragments of the past that could easily be missed if it wasn’t for his expert knowledge accrued from pouring over countless historic maps.

On this particular outing, he took our group of three to the heart of what was once not only the leather capital of Britain (by 1792 a third of the leather in the country came from Bermondsey). The imposing brick Victorian warehouse buildings that remain on Bermondsey Street were built to impress. Many found new uses in the 1980s and 90s through conversions, particularly to apartments.

From the front you can take in the large windows of these towering structures (they were built not only to store finished goods, but were also showrooms, so needed to be appealing to buyers) while at out the back were the tanning pits where leather was manufactured. You can still see the faded names on buildings of businesses (like “LEATHER FACTORS”) that would have operated in these parts.

Although Queen Anne granted the Bermondsey tanners a Royal Charter in 1703 the industry had began to establish itself in the area from medieval times. They benefited from the hides discarded by butchers in the City, a fresh water supply, good transport connections and a growing market to sell its wares on its doorstep. London shoemakers, hatmakers, saddle-makers and glovemakers all used the material.

On the 18th and 19th century maps that Ken handed round, the tanneries can clearly be seen (archaeological evidence from this period has been found for the trade), alongside other industries such a hat maker (Christys Hats was one stage was the largest in the world and had operations in Bermondsey until the 1970s), timber yards and hop warehouses.

Just a few minutes walk from Bermondsey Street in Weston Street is the Leather Market, which was described by Mogg’s New Picture of London and Visitor’s Guide to its Sights (1844) as “a large and lofty quadrangular building, with a fine open area and other conveniences, and is well adapted to the purpose for which it was erected.” The publication noted that skin and leather trade which had been “carried on entirely in Leadenhall Market” was now almost entirely being carried in the new 1832-built complex in Bermondsey.

Most of the buildings – bar the clocktower and slaughterhouses – but are today rented out as offices and artists’ studios. Given this change of use, you need to turn to written accounts to get a good understanding of what it was like to be there at the time. The Dickens’s Dictionary of London (1879), for example, notes that the air in the neighbourhood “air reeks with evil smells,” before moving on to describe what it was like to pass through the gateway and into the complex:

“Under the roofing are huge piles of fresh hides and sheep-skins. There is no noise or bustle, and but few people about. There are no retail purchasers, the sales being almost entirely made to the great tanners in the neighbourhood. The warehouses round are all full of tanned hides; the yards behind the high walls are all tanneries, with their tens of thousands of hides soaking in the pits. Any visitor going down to look at the Bermondsey hide-market should, if possible, procure beforehand an order to visit one of the great tanning establishments. Unless this be done the visit to the market itself will hardly repay the trouble of the journey, or make up for the unpleasantness of the compound of horrible smells which pervade the whole neighbourhood.”

The Dicken’s Dictionary also describes how the “population is peculiar, and it is a sight at twelve o’clock to see the men pouring out from all the works. Their clothes are marked with many stains; their trousers are dis-coloured by tan; some have apron and gaiters of raw hide; an about them all seems to hang a scent of blood.”

Later on, in 1878, the market was expanded with the establishment of the London Leather Hide and Wool Exchange which was erected next door and also included a private members’ club on the first floor. It closed in 1912. Part of the later building is now occupied by a Fullers pub, which is appropriately called the Leather Exchange. Wonderful inscriptions on outside of the red-brick building depict the messy process of leather making. 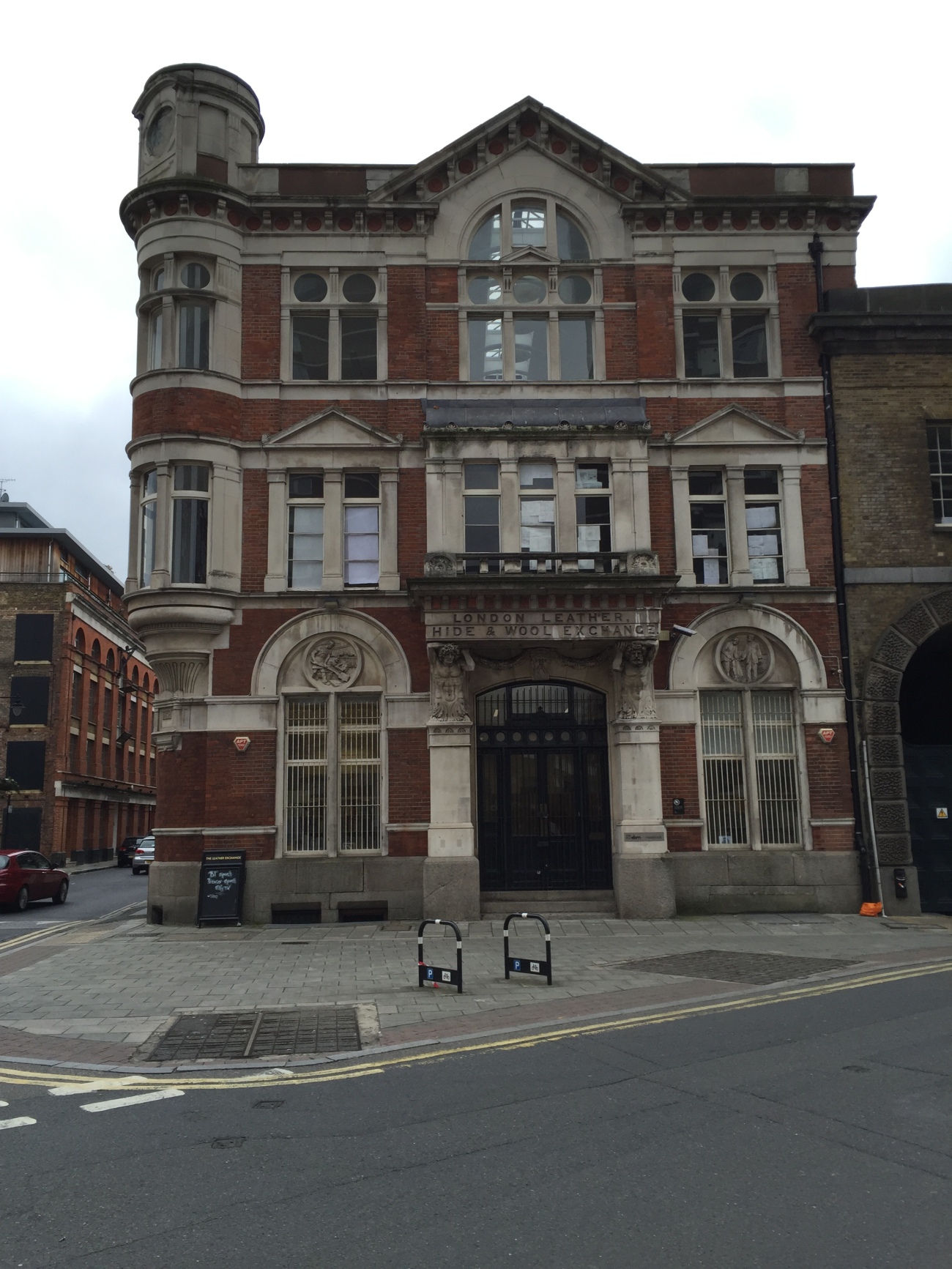 If you head over to Long Lane, you’ll discover an apartment complex called Tanners Yard. It has a stone plaque with the inscription ‘Hepburn and Gale’ above the entrance and is a reminder of when the building was used as a warehouse. Barrow, Hepburn and Gale was one of the (if not the) largest Bermondsey, tanners and leather manufacturers in the 20th century and was an amalgamation of numerous local businesses.

Decline set in for Bermondsey’s leather industry – and associated trades like glue making – from the 19th century, when many firms moved north at a time as hides were being imported to local ports. Far East competitors that could make products cheaper didn’t help either. For Bermondsey the result was empty, abandoned buildings. By the 1960s parts of the area would have seemed like a ghost town.

Now the area has received considerable investment, with new apartments being built and old traditional boozers getting a makeover as gastro pubs. The London Fashion Museum has a very fashionable home in Bermondsey Street and other galleries have opened up (the Maze re-located from Hoxton). And just off it there is a lovely park created in the 1920s on the site of an old workhouse and then expanded after the Second World War.

But looking at the old maps of area, there is more to Bermondsey’s past than just its leather trade. During prehistoric times Bermondsey was an island surrounded by marsh land and streams. And it was the church that invested in dams and defences to make it habitable.

Bermondsey Abbey (was at one time just as important as Westminster Abbey and boasted a considerable sized estate at the top of Bermondsey Street. It was founded by 1100, although there was the first mention of a minster church on the site in the 8th century. The institution grew through medieval times and was home to at least two royals.

This very stretch that we explored on Ken’s walk probably owes its existence to the fact that it connected the Abbey to the river. And over time Bermondsey Street built up with an array of houses (perhaps lived in by leather merchants) and other buildings (examples from 17th century remain). The construction of the London and Greenwich Railway viaduct in 1838 cut Bermondsey Street off from the river.

Bermondsey Abbey’s fate was sealed by the dissolution of the monasteries under Henry VIII, with the last abbot of Bermondsey surrendering in 1538. It was sold and subsequently passed through a number of private hands, before what is today known as Bermondsey Square was built.

Only a few Georgian properties remain on one side of the square. It suffered severe bomb damage during the Second World War and today boasts a very modern development of the Bermondsey Square Hotel, as well as shops and restaurants below a block of wood-clad apartments.

English Heritage and Southwark council have erected in Bermondsey Square new signs charting the history of the Abbey, but they’ve omitted to describe the traces of the religious institution that can still be seen today. Ken showed us remains of its walls in a newly-built restaurant and even traces of the hinges of its former gatehouse.

And it was within the former Abbey grounds that I had drank my coffee. The Watch House – a cosy little cafe next to St Mary Magdalen – is housed in what was an 1812 building, constructed as a precursor of a police station. As well as watching over the graves of the churchyard, the occupants kept watch over the wider area (you can even see the bars of a former cell). Bermondsey’s history remains alive, just without the nasty smells of the leather trade.