The best way to understand why London’s East End docks closed for good in the 1980s comes if you take a 40 minute train journey east from Fenchurch Street. At the Port of Tilbury, piled up one of top of another are vast containers which are awaiting onward transportation by lorry – or for export by ship across the world. Containerisation was the very thing that the likes of West India Quay and Millwall Dock weren’t geared up for, providing some some explanation as to why they closed to commercial traffic in the 1980s.

But unlike the romanticism today of the former working docks in central London at Tilbury the dockside warehouses are far from structures of beauty. Corrugated iron seems to be the preferred building style. The passenger ferry terminal – now grandly named London Cruise Terminal – is made of brick, although one can only hope they whisk new arrivals quickly by car or coach from this desolate spot. 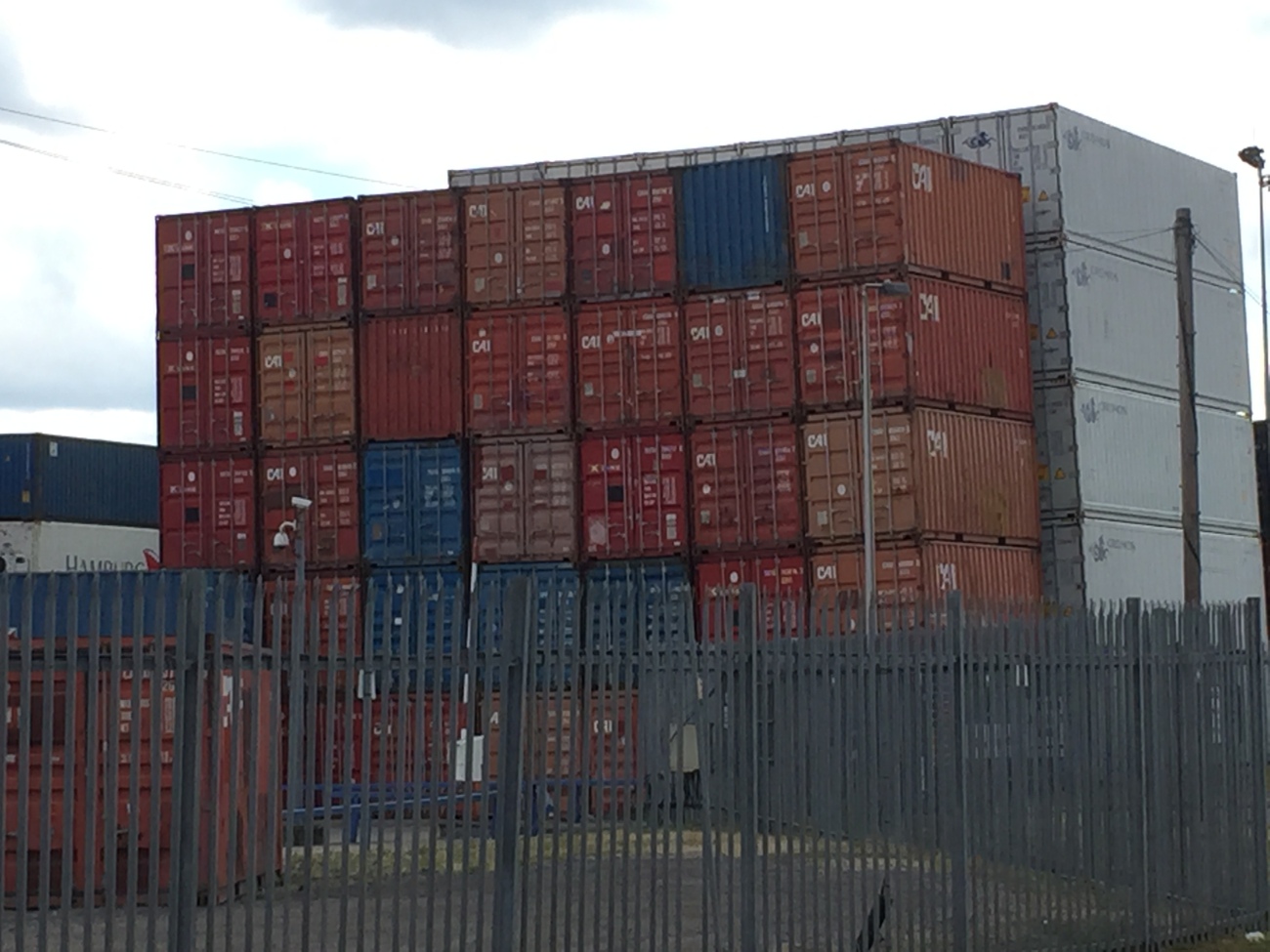 Containers at the Port of Tilbury

My walk from the train station to the muddy foreshore of the Thames estuary was a  slightly eery experience. It was broad day light, but there just didn’t seem to be anyone around as I strolled with a high concrete wall on side of me and the occasional lorry trundling past on the other. I could just make out cranes, containers and rows of cars parked up on the other side of the divide.

However, once I had arrived near the passenger terminal things were a little busier. Not because there was a ship in town, but from cyclists whizzing along the costal path and bird watchers looking out onto the muddy foreshore in front of them. Others had parked up at the World’s End pub which, despite seemingly being in the middle of nowhere, was actually pretty busy inside. There has been an inn here – across the water from Gravesend – since at least the 17th century and in the 19th century was home to a cattle market. It was from near here that for many centuries the ferry to Gravesend left (the service continues to connect the two towns).

And next to the World’s End is Tilbury fort, which guest contributor Oliver Clark has previously written about. As he wrote, it was for many years an important defence for London, up the coast. Construction started in 1539, but it was significantly upgraded in the decades that followed, not least when England was under threat from the Spanish. Elizabeth I famously addressed here troops at Tilbury in 1588. And it was re-built in the 17th century. Today, it is managed by English Heritage.

Tilbury became the main docks for London in the 1980s, but the area’s maritime history goes back much further. There is archaeological evidence for Roman occupation. And much later on Daniel Defoe operated a brick factory on the marshes. The railway arrived in 1856 and the docks opened in 1886. But as the area was uninhabited, a new town was built on the land mainly part of Chadwell St Mary to accommodate the workers. There was also a raft of building work in the town in the 1920s to create houses of a higher standard.

London Cruise Terminal – as it is now known – was opened in 1930 by the then prime minister Ramsay Macdonald to serve world-wide passenger services to Australia and the Commonwealth in an age before air travel became popular. The SS Empire Windrush arrived here in 1948 from Jamaica, bringing with it the first generation of migrant workers from the Caribbean. Sadly the terminal closed in the 1970s, but with the resurgence of popularity for cruising it re-opened in 1995 and continues to be used to this day (Tilbury Riverside train station didn’t however re-open and stands empty). Unfortunately the Grade II-listed reception and grand hall of the terminal is normally off limits to all but those setting off from boat here, but it will be a venue for the upcoming 2016 Estuary festival.

Aside from offering passenger services, the Port of Tilbury is today one of Britain’s three major container ports (alongside Southampton and Felixstone) and, alongside cars, bulk containers, timber and building materials, is the the country’s main port for importing paper. According to Forth Ports, which runs Tilbury, the site covers 850 acres and boasts more than 500,000 square metres of warehouse space. The company also plans to spend £100m expanding operations following its purchase of the disused Tilbury Power Station.

But while Tilbury won important business that to that fact that it was ready for containerisation in the 1980s, these sorts of operations require far fewer human beings than when everything was shifted by hand at the docks. Tilbury’s economy has struggled somewhat in recent decades, but the arrival of major companies, such Amazon, are starting to provide additional employment opportunities. The high street is looking quite tired with several shops boarded up. Yet when I stopped for a snack in the one of the cafes  before setting off on my exploration of the area I encountered very friendly people.

After the World’s End and Tilbury Fort, I continued my journey east along what has been billed the Thames Estuary Path – a route stretching almost 30 miles to Leigh-On-Sea. I was only walking the first third, from Tilbury to Stanford-le-Hope. And for a good time I had the mostly tarred path to myself. Once the industry of Tilbury disappeared, I could enjoy pleasant views across the estuary on my right, while on my left were open fields (some used for keeping horses, others were kept for growing crops). I felt a long way from London.

But the tranquility was interrupted by my arrival at Coalhouse, which was one of the most powerful coastal forts in Victoria England. Built 1861 and 1874, it replaced Tilbury as first line of defence against the French and was in use until just before World War Two. It was protected by thick stone walls and concrete shields, surrounded by moat and there were 18 massive guns (and 200 soldiers) stationed here. I found some enthusiasts climbing on what remains of the military structure, but it seem to be more popular with families eating picnics and cheering loudly as they played mass games of rounders.

I soon lost the crowds however as I alternated between walking by the sea wall – with spectacular views across the Thames estuary – and rough fenced tracks across fields. It felt like I was in unspoiled countryside, but every now and again signs warning of heavy plant machinery crossing the path was a reminder that industry was not far away. Once I had gone as far as the track allowed along by the Thames, I veered inland  through a nature park and on to Stanford-le-Hope, two stops along the train line from where I had got off at Tilbury.