Jewish Krakow – the rise, fall and re-birth of a community

By day and night, Kazimierz is the beating heart of Krakow. It’s here that many visitors to the city head for a night out in the extensive network of bars or relax with a coffee in one of the pavement cafes. There are also curious souvenir shops, brimming with colourful, and an array of interesting little museums.

It’s no coincidence that many exhibitions in the latter are dedicated to Jewish life given that the area is home to Krakow’s (and indeed Poland’s) oldest synagogue, dating back to 1407. The first big Jewish settlement came at the end of the 14th century following a pogrom in Prague and a large number chose to flee here then.

But at the start of the Second World War – in which the Nazis took Krakow in less than a month from their invasion of Poland and made it their capital in the country – there was a crack-down on Jewish life in Kazimierz. First Jews were subjected to a range of rules, such as being told they had to wear special arm-bands identifying their religion and they were not allowed to use public transport. Black and white photos show Nazi soldiers enjoying themselves, looking as if they were on holiday, while they enforced Jews trimming their beards so they were “civilised”. And then in March 1941 things became more serious when Jewish people were forced out of their homes and into a ghetto across the river.

Jews wouldn’t disappear from Kazimierz forever however. There is today a Jewish community and seven synagogues survive, four of which are active (although these numbers are dwarfed by the 100 such establishments that stood here pre the Second World War). And in 2008 a Jewish Community Centre opened with the support of Prince Charles, giving the young and old alike a place to socialise and meet with their friends.

Kazimierz was originally an independent city – separate from Krakow which lies immediately to the north – enclosed by a wall (sections survive), with four gates providing the only way in and out. It was founded by Kazimierz III Wielki (hence the area’s name) in 1335 and soon attracted Jewish inhabitants, not least through the aforementioned pogrom in Prague.

The 15th century Old Synagogue stands on a sunken platform at the end of a wide boulevard called ul Szeroka, which is today popular with tourists and has a large number of cafes with tables stretching onto the pavement. It boasts a large prayer hall for men and a smaller one for women which was built later on. When Jewish life was eradicated from Kazimierz in 1941, many synagogues became warehouses (and this particular one was used to store ammunition). It’s now the Jewish Museum.

But the Old Synagogue was by no means the only synagogue on this stretch. The so-called Second Synagogue (also called Remu Synagogue) was established when the Jewish community in Krakow faced tensions with the Christians living there and so they re-located to Kazimierz. As these Jews were from a different branch of Judaism, they wanted their own place of workshop (rather than mixing with the Jews that had arrived from Prague) and so this synagogue was built.

The 16th century was considered the golden age for Poland’s Jews and Kazimierz was at this time was starting to consolidate its position as the country’s centre of Jewish culture and scholarship.

There were Christians living in Kazimierz, but they were in a separate quarter of the city to the west, with a wall dividing the two communities. While most visitors today congregate in and around the old synagogues, it is really worth exploring the Christian quarter as well. The towering Corpus Christi Church, which features Baroque furnishings, was built in 1340 and for a long time was the Kazimierz’s parish church. And across the market square is the equally splendid town hall.

By the end of the 18th century Kazimierz was administered by Krakow, but it remained the main Jewish quarter right up till the Second World War, with most of the city’s 65,000 Jews living here (by the end of the conflict there were only 6,000 Jews in Krakow in total). Kazimierz was little more than a slum for many years and it was not until 1990s that the area started to be improved. This came in a large way thanks to film director Stephen Spielberg who came here to shoot Schindler’s List (more on this later). Visitors were subsequently attracted to Kazimierz and the tourist district seen today, with its many restaurants, bars and cafes, developed. And with the area populated again, many rabbis were persuaded to come back to the city as well.

Cross over the river from Kazimierz and you arrive in Podgroze, the former Jewish ghetto. Created in 1941 when 18,000 Polish Jews were evicted from their homes in Kazimierz so they were further away from the Nazi centre of adminstration, the conditions were terrible given that the new residents were forced to live in an area that had previously been home to only around 3,000 non-Jews (Polish workers who had been moved in the other direction). Individuals had perhaps on two squared metres of personal space, with multiple families sharing damp, dark single rooms.

Traces remain today of the grey wall that surrounded the ghetto, which prevented the inhabitants from escaping (some inevitably did, and although we don’t know precise numbers it probably wasn’t that many especially as time progressed). Four gates (now disappeared) provided the only means of entering and exiting the area. And as for the wall itself, was it purely a coincidence that into was organised into section which were curved at the top, just like the tombstones of traditional Jewish graves? It was, after all, death that many of the residents faced during the two years the ghetto operated.

Probably the darkest part of this district was at Bohaterow Getta square, an open grey cobbled plaza which trams rattle past as they head over the river and into the old town of Krakow. But between 1941 and 1943 it was known as deportation square as this was where many of the ghetto’s inhabitants assembled and were told whether they had been selected for onward transportation to labour camps. 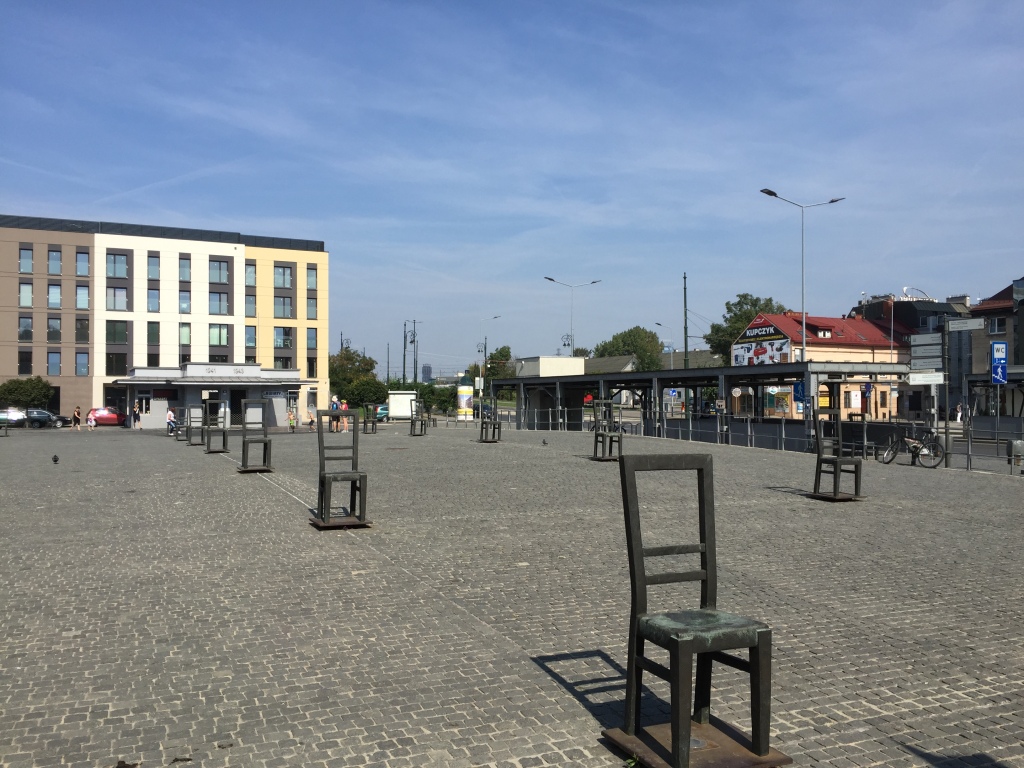 Some Jews turned up here with their suitcases, full of hope and believing that they would be transported to somewhere that was more pleasant to live. What in fact they faced was either an unpleasant three day journey to a camp in Belgium to which they were transported in their thousands like cattle and many died on route, or later Auschwitz, a satellite city outside Krakow. In an area which has seen much development in recent years, it is hard to imagine these poor souls being marched through what are today quiet residential streets and past trendy cafe bars on the way to the railway station some 3km away.

Podgroze ghetto was liquidated in 1943 and those who remained were sent either to Auschwitz or Plaszow forced labour camp, which at its height held 25,000 people (little survives now of the latter).

But the victims of Podgroze have not been forgotten. Bohaterow Getta is essentially a memorial to all of those that were deported (and indeed all of the estimated 2,500 people, including children shot at point blank range, that were killed in the square itself). Giant empty concrete chairs – erected in 2002 – are positioned facing towards the camps and other sites where the Jews were taken. And what was between 1941 and 1943 an SS police office has been renovated and is now a small gallery (before the war, when the square was a bus station, it had been used as a waiting room).

In amongst all the darkness of the shocking acts carried out at Podgroze, some heroes do emerge. It’s hard to know how many lives pharmacist Tadeusz Pankiewicz saved by helping Jews living in the ghetto. His shop stood on the edge of Bohaterow Getta square and many were given free medicine or escaped deportation to extermination camps by entering this building. The interiors were destroyed in the 1960s, but it has been mocked up to how it would have looked during Nazi occupation, complete with counter, laboratory and medicine containers on the shelves. Pharmacy Under the Eagle is run as a museum depicting daily life in the ghetto. 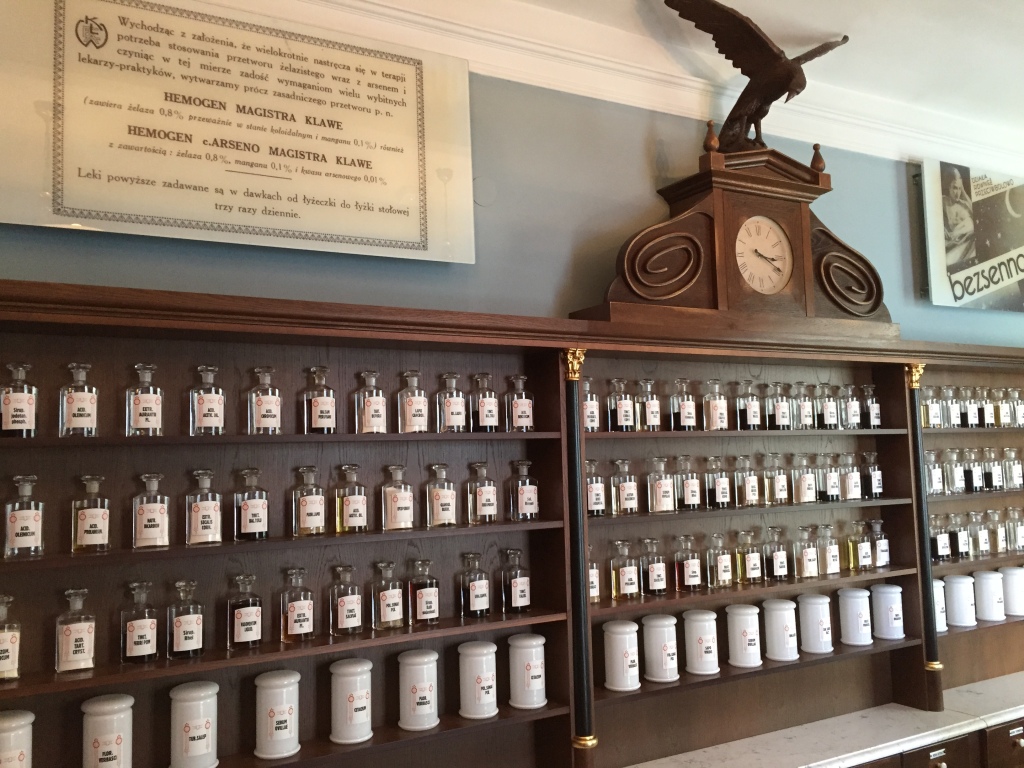 Pankiewicz was a non-Jew, but was allowed to stay in the ghetto when most Poles were moved elsewhere in Krakov in 1941. He and his staff risked their own personal safety to help the Jewish residents. Irena Halpern-Cynowicz describes how he was passing the pharmacy with a “ragged group in the direction of Zgody Square” for deportation, driven and beaten by infuriated Germans” when he “had a sudden thought that I could actually hop inside.” His escape came off and Halpern-Cynowicz had this praise for the pharmacist: “It may be that I would not have survived the war had it not been for him”.

Another survivor added: “By living amongst us, he was constantly exposed to danger, but it didn’t put him off. He was utterly compassionate towards us in our tragedy and he sought to help us as best he could. The death of every single man, woman and child came as a terrible blow to him.”

And then of course there is Oskar Schindler. As already mentioned, Schindler’s List was filmed in Kazimierz, but it was based on a book (Schindler’s Ark) charting, to some degree of accuracy, events that took place in Podgroze and Plaszow labour camp, some 3km away. Schindler famously saved the lives of Jews (and their families) working at his enamel factory by establishing a sub-labour camp here and then moving them across the country to another plant.

Although Schindler should be commended for saving the lives of more than one thousand Jews, what doesn’t come across clearly in the film is that being part of the list – which brought safety – was sold to the highest bidder. And the Jews were only brought to his enamel factory from the Podgroze ghetto in the first place because he needed cheap labour.

Today, only the offices survive of Schindler’s factory (you can see the desk where the businessman would have sat looking at a map charting land under Nazi control) – most of the buildings were where the modern building of the Museum of Contemporary Art in Krakow stands. The attraction actually called Schindler’s Factory is now a superb interactive museum documenting life for inhabitants in Krakov under Nazi occupation. It’s a harrowing series of exhibitions, but very informative and will take you to a period of history which is a long way from the Krakow – and indeed Kazimierz – enjoyed by visitors today.

Crossing the river from Kazimierz to Podgroze, the Jewish ghetto