These days Birmingham and Manchester battle it out to be England’s second most important city, but from medieval times to the 18th century it was Norwich that was the runner-up to London. Cloth was the industry that made this place famous and weavers’ work was brought here from across East Anglia for onward sale leaving a lasting imprint on its architecture.

Given the importance of Norwich a wall, stretching for some two and a half miles – the longest in Britain – was built to supplement the natural defence offered by the River Wensum. Standing seven metres high, and with a deep outer ditch, there were 40 towers along its course. Norwich Castle, which now hosts the city’s Castle Museum and Art Gallery and a shopping centre underneath was begun in the 11th century and was originally a wooden structure, stood in the centre of the settlement.

The 12 gates where the walled city could be entered were removed in the 18th century as Norwich expanded, but the overall street pattern of the centre has changed little since medieval times. Given how fascinating and charming Norwich is, I’m just surprised it didn’t have – as far as I could tell – that many tourists when I visited.

It was cloth money that made Norwich, with rich merchants paying for churches to be re-built in lavish styles (30 such buildings survive, more than the number remaining in London, York and Bristol combined). As for the halls where their wares were traded, there is a particularly stunning medieval structure you can visit which has been tastefully converted into a restaurant, bar and cinema complex. The Museum of Norwich in Bridewell Alley is housed in an early merchant’s house, but there are other examples that can be seen as you stroll around the city.

Some 30 years after Norman invasion of 1066, builders started work on Norwich Cathedral on the site of the old Saxon marketplace. Its octagonal spire rises to a height of 315ft, a runner-up to only Salisbury. And the cloisters, built between 1297 and 1450, are particularly unique in that they are the only two-storey form of these surviving in England.

With the building of the cathedral, the marketplace was shifted to its current position, which is now home to an array of permanent modern units, selling everything from food to bric-a-brac with mock colourful stripy awnings as a nod to the types of temporary stalls that would have been set-up here on market days.

On one side of this open trading space stands St Peter Mancroft, the largest parish church in the city and the second largest in the entire country. Built in the 1430s, the preacher John Wesley later said of it: “I scarcely ever remember to have seen a more beautiful parish church.” For me perhaps the most fascinating feature was a 16th century tapestry, protected by curtains which are drawn back by stewards upon request, believed to have a gift from Dutch weavers who were welcomed into the city to practice their trade. At one stage one in three of those living in Norwich was said to be foreign.

Norwich got its charter in 1404 allowing it to elect a mayor and a few years later the Guildhall, which overlooks another side of the marketplace, was built. The council outgrew the building by the new 1930s (by which stage the city’s main police station was housed in a nearby tin shack) and so the take it or leave it Scandinavian-style City Hall, with its clocktower (currently covered in scaffolding), was built.

When the council moved out of the 15th century Guildhall – the second biggest after the one in London – in the 1930s, the main courts remained for sometime however. Now they have gone the Georgian courtroom, retaining many of its original features including the judge’s seat and upper balcony, is now home to the Britannia cafe. It has been tastefully restored, bar ‘Taste rules!’ scrawled garishly in large red letters on one of the white beams.

Although Colman’s, the famous mustard brand, and a string of other manufacturers set-up in Norwich, the city lost out badly to northern towns during the Industrial Revolution. The lack of coal and adequate water supplies meant that businesses mostly looked elsewhere and many merchants were bankrupted in the process. Cloth firms attempted to hang on through specialisation, with it becoming the centre for worsted weaving and ‘Norwich shawls’, but with cheaper competitors elsewhere it was tough going.

While the centre of Norwich has none of the grand Victorian warehouse and other industrial structures that places like Manchester can boast, the 19th and 20th centuries weren’t a complete washout in terms of new buildings. The city’s most famous architect, George Skinner, well and truly left his mark in the centre, with a string of eye-catching designs, including the structure built for Jarrold, Norwich’s very own department store. And on the front of the next door building that was his office there’s an attractive frieze depicting an architect at work.

But perhaps the highlight of Skinner’s work is the Art Noveau Royal Arcade at the bottom of marketplace and dating from 1899. It was hailed as “a fragment from the Arabian Nights dropped into the heart of the old City”. Built on the site of the old Angel Inn and not resembling the design of Burlington Arcade in London’s Piccadilly, its beautiful tiling, stained glass has been lovingly restored. According to Sir John Betjamin Skinner “was to Norwich what Gaudi was to Barcelona.”

Walking around the charming cobbled streets with fine Tudor buildings near Norwich Cathedral, it is hard to believe that anyone would ever have want to demolish large parts of this quarter which is now extremely popular with tourists. But in the 1920s it was only the casting vote of the mayor that stopped a number of historic structures being replaced by a new municipal swimming pool.

As industry had moved elsewhere in the country, the ramshackle buildings fell into disrepair. Yet the fact that they are proudly still standing demonstrates that these old homes and workshops – built around courtyards and complete with weavers’ windows – had plenty of life left in them. They just needed some love, care and attention.

Numerous unsightly concrete buildings sprung up after the Second World War, but fortunately these are now gradually being replaced. On the site of a 1960s-built library block, next to City Hall, is now the Forum. The flashy glass structure has divided opinion, but housing the city’s tourist information centre, library and local BBC studios, it is well used and illustrates that Norwich is looking to the future. 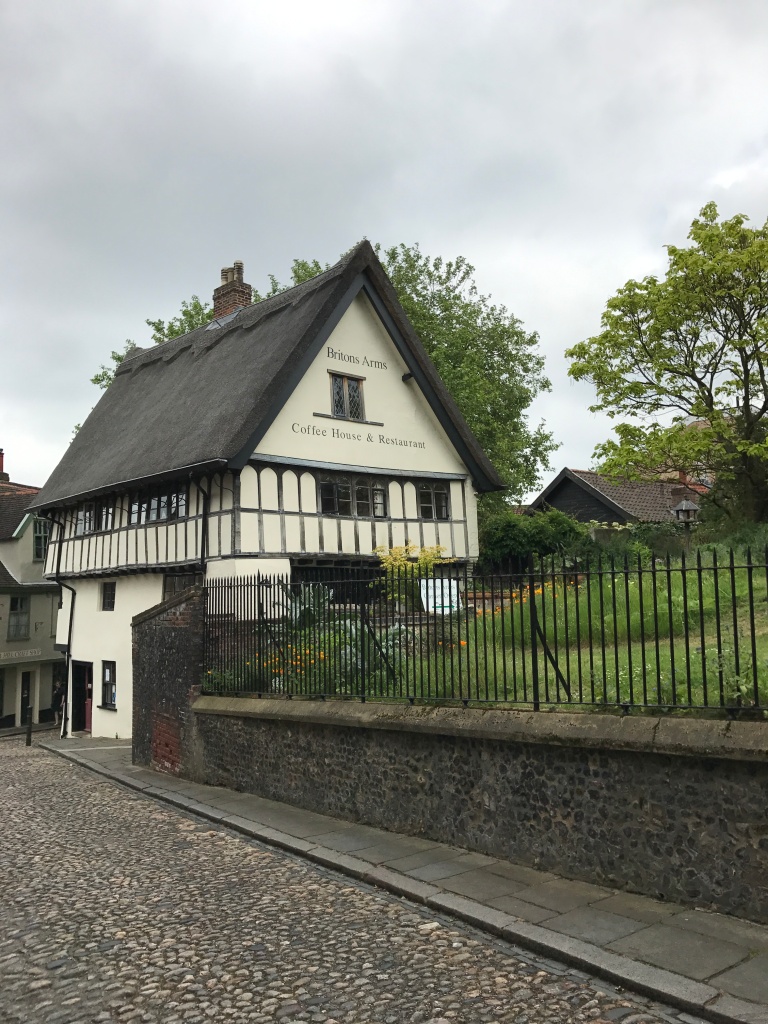