Chelsea Market is a food-lovers paradise, with over 35 outlets ready to entice New Yorkers and visitors through its doors by serving everything from upmarket doughnuts and Cambodian sandwiches to oysters and Japanese-inspired Mexican dishes. I visited in the morning for an excellent breakfast sandwich of bacon, egg and avocado on sourdough, and returned later to crowds of people for an equally good light lunch.

Currently celebrating 20 years in business and now one of the most popular destinations for tourists in New York, Chelsea Market is housed in a former biscuit factory that once made brands such as Oreos. The attractive brick-built plant, which was built in the 1890s and became the headquarters of the National Biscuit Company, benefitted from by-products from the nearby slaughterhouses.

Chelsea and the neighbouring Meat Packing District may today be home to the world’s most celebrated fashion designers, high end hotels, trendy art galleries and popular restaurants, as well as some of the most desirable real estate in Manhattan, but 20 years ago it was a no-go area. The Mafia had made a swoop for the maze of crumbling warehouses and the streets were known for prostitution, drugs and crime.

But from the 1990s onwards Mayor Rudy Giuliani and others set about changing the area’s reputation with a tough crackdown on undesirables. They enticed Google to establish its eastern US headquarters in a block so large that staff travel around on scooters to get to meetings. Some residents moved to the area because Samantha in the hit TV series Sex and the City lived in the neighbourhood, even though it was clearly portrayed as dilapidated. And then of course came Chelsea Market. Now the place is booming.

The area today known as the Meat Packing District was established in 1847 as an industrial zone near the docks for slaughter houses, butchers and meat packers. Railroad lines into residential areas of uptown New York City made it a popular place for those operating in the catering trade to set up businesses.

But with the rise of trucking and refrigeration by the 1960s, butchers didn’t need to all operate in one place and the Meat Packing District started to become run-down. And so with the area at its lowest the Mafia decided to move in. The group even used the Homestead steak house, New York’s oldest and now upmarket, as a front for their operations. 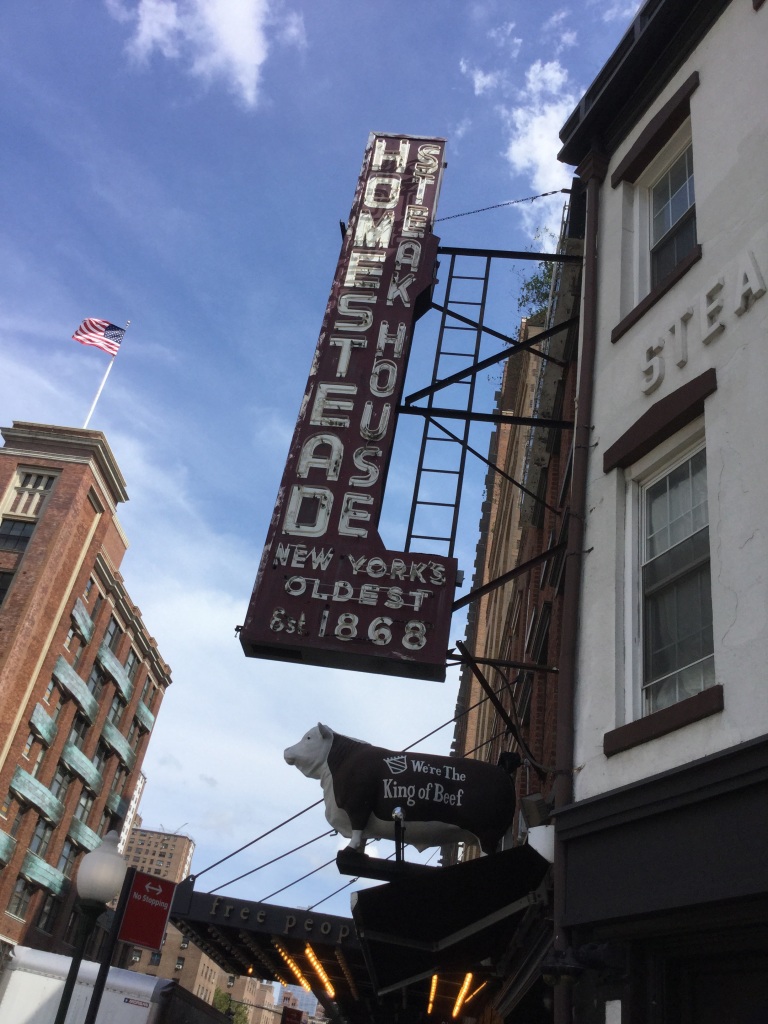 The area may have been greatly rejuvenated in recent decades, but traces of the past are still evident as you explore these fascinating neighbourhoods of Manhattan. For example, the distinctive black awnings where carcasses of meat would have hung outside butchers, showing buyers what was on offer are protected. Many today form canopies of pavement cafes and bars.

There are actually three meat packing businesses still operating in the Meat Packing District, but they are due to move out of the area by the end of the year. Given they lie in between the Whitney Museum of American Art and the Standard Hotel, one of New York’s most fashionable and where rooms cost $500 per night, you can imagine the land here is pretty valuable. Curiously however given the extensive transformation in the area, the remaining butchers stand near a hotel that has not changed much in years called Liberty where rooms are rented by the hour.

One of the best ways to explore Chelsea and its neighbour, is by walking along the High Line, a long strip of greenery raised 30ft off the ground. It was only opened in 2009, but is now said to be the second most popular tourist attraction in New York after Times Square. Volunteers tend the flowers, trees and shrubs, and there are plenty of benches where you can sit down, relax and take in the views across the rooftops.

The park is built along the route of what was previously railroad tracks and as you walk along the High Line you can still see evidence of rails in parts.

Since the opening of the Meat Packing District in 1847 the tracks, which were used by businesses operating in the area, had run at street level. Tenth Avenue became known as ‘Death Avenue’ as some 50 people were killed each year by trains. Local authorities therefore commissioned what is today the High Line in the 1930s at a cost of some $150 (some $2 billion in today’s money).

Some of the businesses operating in the Meat Packing District re-built their warehouses so that the line could run right through their buildings, making for the easy loading and unloading of goods. These actual structures are now used for offices and high end apartments, while artists and traders sell their wares on the enclosed sections along the High Line. 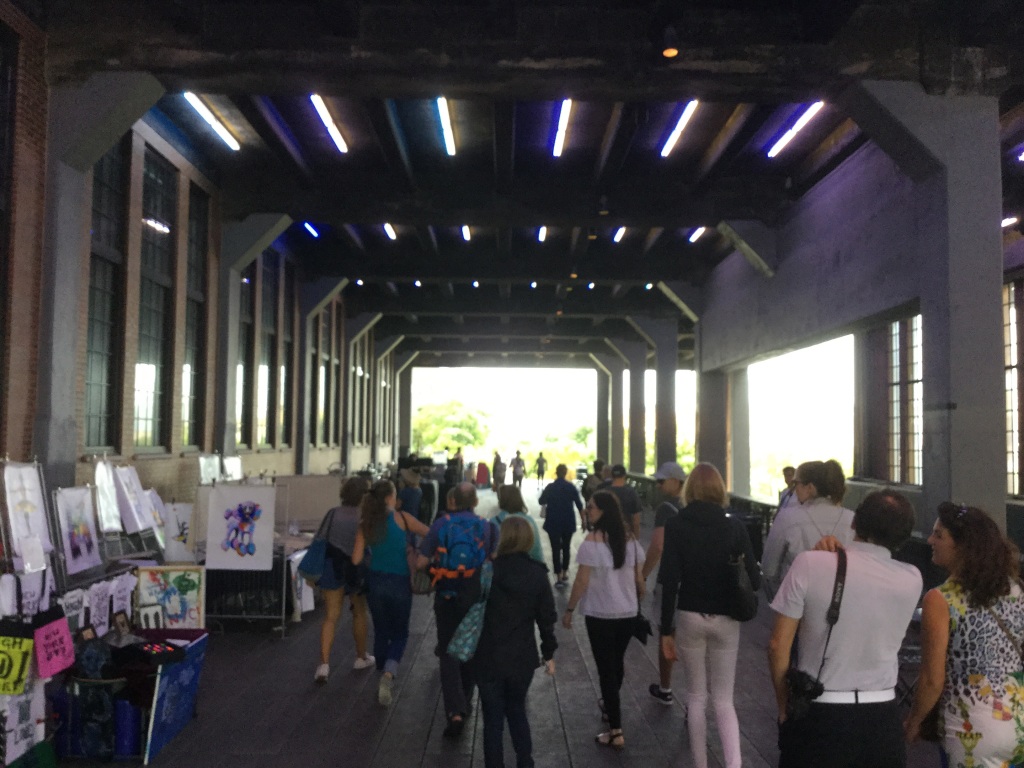 Inside an old meat packing warehouse on the High Line

The downfall for the railroad line began in the 1960s when a section at the southern section was closed due to a fall in use as trucking became more popular. By the 1980s and 1980s it had become completely obsolete and was frequented by drug users and New Yorkers sneaking up onto the abandoned tracks to have picnics. The visitors that were brave enough to visit the area as dead bodies were hauled off the rusty line.

Some local residents wanted the raised tracks to be pulled down, but a committee called the Friends of the High Line was founded in 1999 by Joshua David and Robert Hammond to save the route and turn it into an urban park. Finally in 2006 the railroad company washed is hands of the line and the first section opened three years later.

Walking along the High Line today is to walk through perhaps New York’s most successful regeneration project. The route is beautiful, green and popular. Chelsea and the Meat Packing District may be trendy places to visit, but the area’s past has not – and should not – be forgotten. 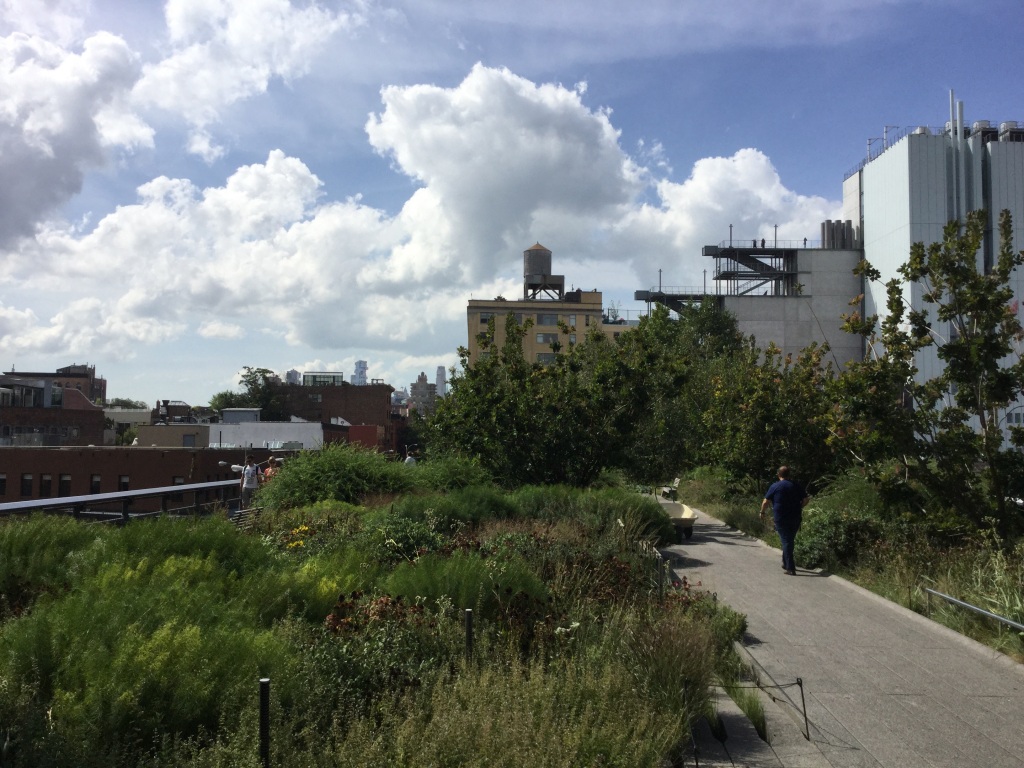