Manchester’s fascinating past – as seen through its churches

Rogers Govender must be a busy man. As well as presiding over the city’s cathedral he is also the rector of a parish church and the warden of the Collegiate Church. But the Dean doesn’t have far to to go to move from one to the other – they are all on the same site.

In fact, all the churches are in the same building. That that the structure, near Victoria railway station, can have three different names illustrates the complicated nature of Manchester’s religious history, but also tells us a lot about the city’s fascinating past.

Medieval Manchester grew up on a sandstone hill at the point where the rivers Irk and Irkwell meet. At the centre of the development was a church with an attached college for priests, which was built after Henry V granted a charter to Thomas de la Warre, Lord of the Manor Manchester in 1421.

The standstone Collegiate Church, which was built between 1422 and 1458 and lay at the heart of the complex, is the very building that over time would grow into today’s Manchester Cathedral. Dedicated to St Mary, St George and St Denys, it essentially meant re-building an existing parish church. And when the Diocese of Manchester was created in 1847, it was upgraded to cathedral status (Manchester subsequently became a city in 1853).

De la Warre’s college is long gone, having been dissolved by Edward VI in 1547. During Mary Tudor’s reign, it was a re-founded as a Catholic establishment and then became (Protestant) Christ College under Elizabeth I, but after the English Civil War (when it was used as an arsenal) the then abandoned premises were bought by Humphrey Chetham. The Manchester merchant funded a school for the “maintenance and education” of 44 poor boys and a library, however he died in 1653 before his scheme was completed and so it was opened in his memory.

Today, that site contains Chetham’s music school and Chetham’s Library, which is the oldest public library in continuous use in the country (the latter can be visited if you arrive at one of the advertised fixed entry times). The 15th century baronial hall – which formed part of De La Warre’s manor house before it became part of the college – survives, as do cloisters and fellows’ dormitories.

Back at Manchester Cathedral itself, there are also many surviving features from when it was the Collegiate Church. The choir stalls are lavishly carved, but if you peer under the wooden seats you will see examples of where the craftsmen had some fun. One carving features a family of dancing piglets, while another has a hunter cooking a rabbit. 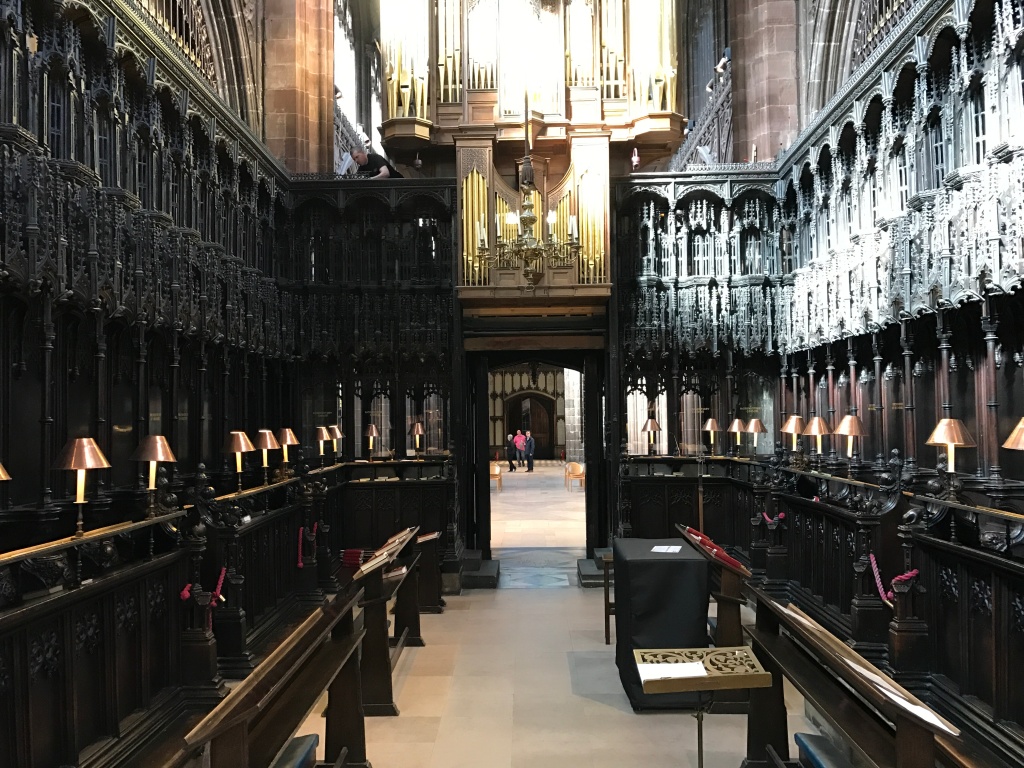 To see how far the influence of the church spread, just take a walk to Parsonage Gardens. This pleasant green space lies on top of a graveyard which was attached to house of worship built in 1756 and run by the clergy from St Mary’s (now the cathedral). Around the square homes for parsons and their families were built, but over time they were replaced by the commercial buildings that can be seen today. When the square lost its residents the church’s congregation dwindled and so was closed in 1890 and then demolished. 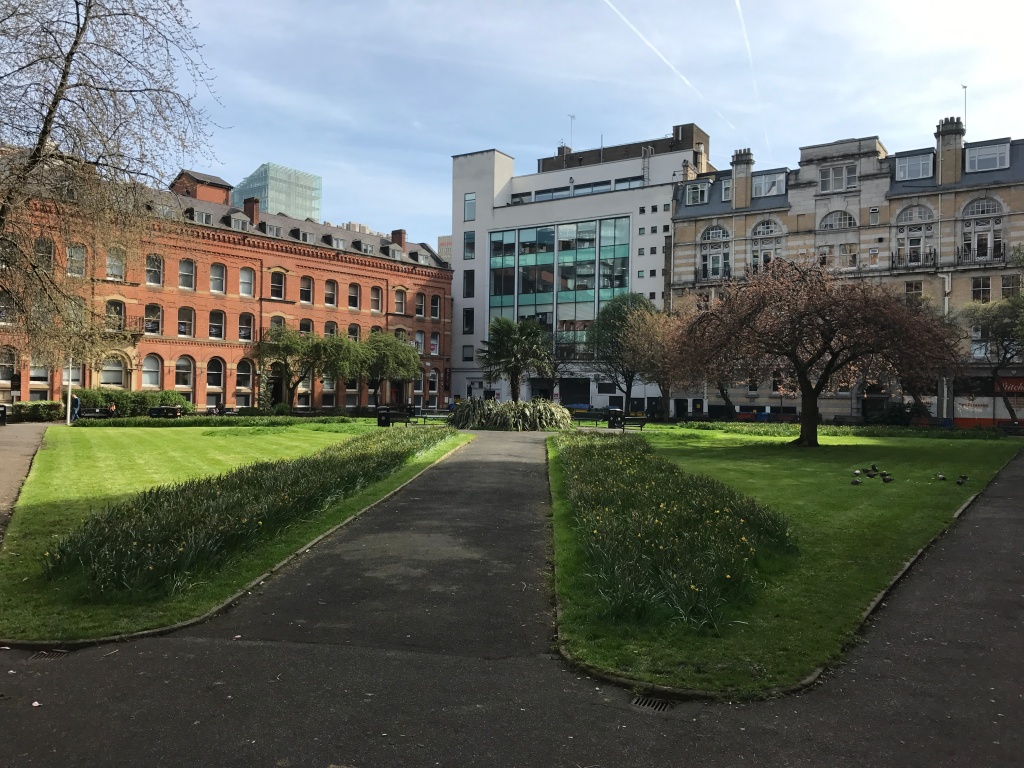 Greater Manchester is entangled with a web of canals and rivers. As I touched on in previous blogs about the area’s past they were essential component of the industrial revolution, carrying not only coal to power factories but were also used to as a means of transporting finished goods to lucrative consumer markets.

But today these waterways offer walkers pleasant towpaths to stroll along when the weather is favourable. On my most recent visit to Manchester I walked by the Bridgewater canal from the city centre to Salford. Passing water-side luxury apartments in converted former industrial buildings and bars with pleasant terraces, I reached the modern Media City and Lowry developments that make up the Quays.

The walk took me about an hour, but in fact I could have been in what is technically Salford much quicker than that. Crossing the River Irwell using a bridge just a stone’s throw from Manchester Cathedral brings you to land belonging to the rival city in a matter of minutes. And here you soon come across Sacred Trinity Church, which is surrounded by railway arches and roadworks.

Although Salford received a charter to hold a market earlier on than Manchester, it wasn’t allowed to build a chapel. As what is now Manchester Cathedral (but then the Collegiate Church) was so close by, worshippers were told they need to cross the river to pray. But permission was granted in 1635 for Humphrey Booth to build a chapel-of-ease, which was originally made out of wood.

Most of the current, Grade II* listed building dates from 1752 and it was considerably restored in 1877 when it became a parish church. The fact that it is here at all is in many ways remarkable given the building was nearly obliterated at the end of the 19th century when extensions were being planned for Victoria station. However, the railway was forced to revise its scheme and the church survived (although one of the platforms was built just a few metres away from the structure).

Further away from Manchester city centre stands Salford Cathedral. The Gothic-styled Catholic church of St John the Evangelist was built by Mathew Hadfield between 1844 and 1848 and took its current title in 1890. Its tall spire, which can be seen from far and wide, is modelled on that of Newark Church.

Cross Street, which links the Royal Exchange to Albert Square, is today a joy to walk down thanks to its Baroque-style Edwardian office blocks and other stunning architecture. But, hidden below a modern glass and granite structure which is currently covered in scaffolding, Manchester’s main Nonconformist place of worship can be found. The current Cross Street Chapel is the fourth to be constructed on the site, the first having opened in 1694 as the Dissenters’ Meeting House.

It was built initially for the Reverend Henry Newcome and came five years after the Toleration Act which permitted non-Anglican places of worship. During the 18th century Jacobite risings its congregation largely supported the Hanoverian line to the throne, which put made it a target for its rivals (who worshipped at the Collegiate Church) to attack. In 1715 a mob led by blacksmith Thomas Syddall burst through the doors and overturned the pews. The chapel was later frequented by mavericks who founded important Manchester institutions such as the Manchester Guardian and the Manchester Academy.

One of the members of the congregation of Cross Street Chapel was Lady Ann Bland, the Lady of the Manor of Manchester, but as had happened at St Mary’s (now the cathedral), she fell out with the institution. Ann, along with her friends, decided to pay for a new church to be built. St Ann’s, which was built in 1709 in red sandstone on the site of a medieval fair and overlooks a later built square of the same name, was named after both the Lady herself and the mother of the Virgin Mary. Of the 19 churches built in the 18th century, this is the only to have survived thanks to its wealthy congregation.

Manchester has experienced rapid growth in a relatively short space of time and its fitting that its fascinating history – from religious college to thriving industrial town and beyond – can be told through its churches. 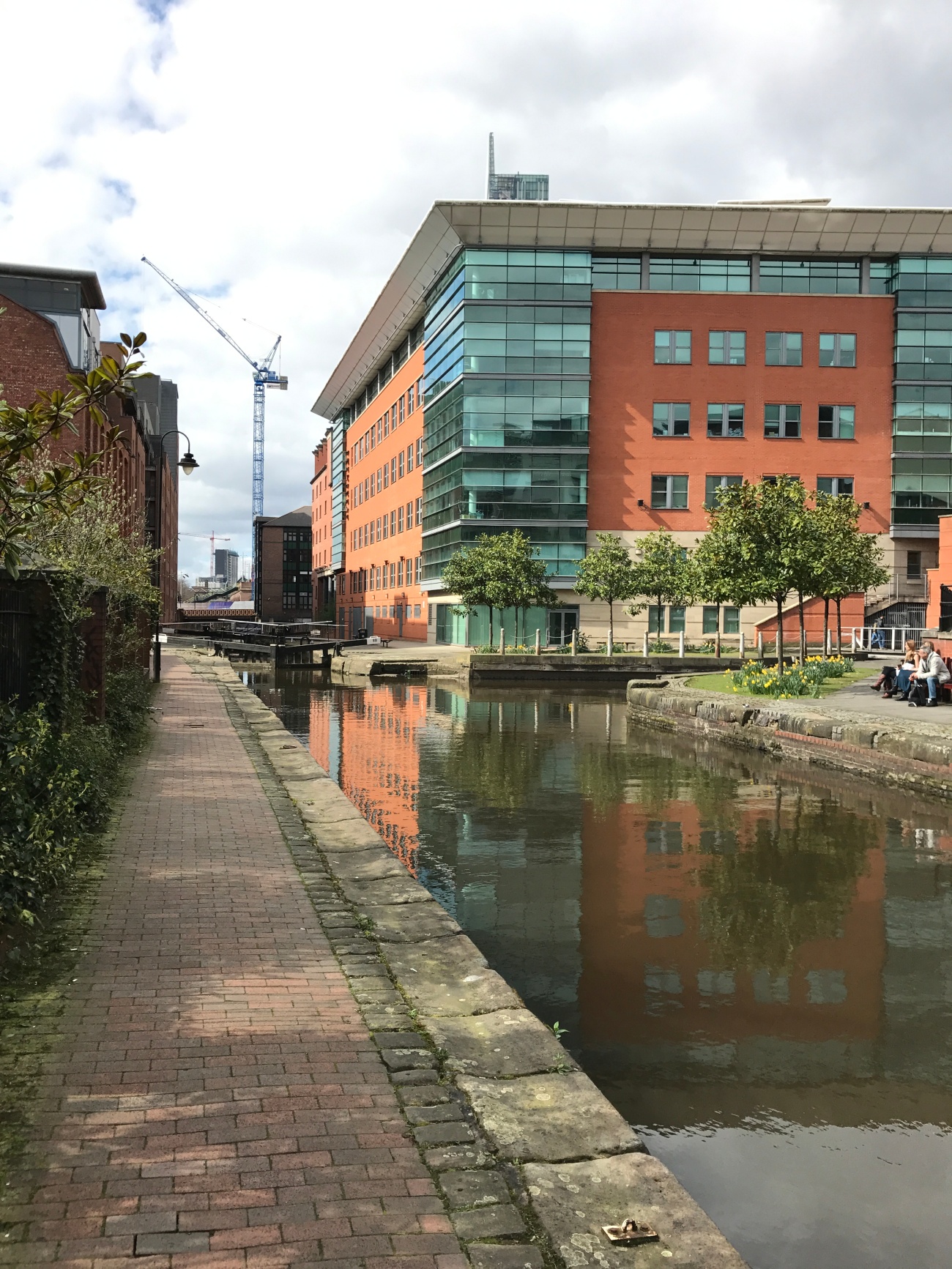