When the Travel Bookshop opened its doors in Blenheim Crescent in 1981, Notting Hill was on the cusp of change. For much of the 20th century this West London neighbourhood was the place many people lived if all other accommodation options had failed. But now bedsits were being vacated and families were taking over whole houses as Notting Hill was becoming a desirable area again.

By the time the film bearing the neighbourhood’s name, starting Hugh Grant and Julia Roberts, was released in 1999 the process of gentrification was well underway. The Travel Bookshop, which both inspired and provided the setting for Richard Curtis’s romantic comedy, lay in the midst of a wide scale projects to rejuvenate Portobello Road, one of the main thorough fares running through Notting Hill. And just a few years after the film came the so-called ‘Notting Hill set’ of Conservative politicians, which boasted future prime minister David Cameron and George Osborne as members.

Fast-forward 20 years and Notting Hill is today one of the wealthiest parts of London Even pokey two bedroom apartments sell for £1.5 million or more. And in the first part of this year, three houses were sold for £20m (one of which was bought by Ed Sheeran).

Portobello Road and Portobello Market have long been famous for trading antiques, however they today form a central pillar of the upmarket offering in this part of London. There are also numerous expensive boutiques, Michelin-starred restaurants and posh bars.

But this exclusivity is a far cry from the aftermath of the Second World War when the rich flight from this bomb-damaged area for other parts of London. The terraced homes they vacated did not lie empty for long however as a new generation were ready to move into these properties.

In 1948 Nationality Act re-affirmed imperial subjects’ rights to settle into Britain. As I wrote in my last blog, in the June of that year 492 people arrived from Jamaica on the SS Empire Windrush. There wasn’t an immediate surge of further new arrivals from the West Indies, but by 1958 it was estimated there were 210,000 from Commonwealth living and working in Britain.

The first to leave their homes in search of work were the middle classes who could afford the cost of the steamers over here, some of whom had served in the British armed forces during the Second World War. Initially it was largely single men who only later gradually brought their families over – sometimes needing to make the difficult decision of which child to bring first.

They were at a significant disadvantage when it came to housing and so were forced to search for properties in areas of London that had been heavily bombed during the Blitz (and where buildings often hadn’t been properly repaired). Notting Hill had once been considered elegant when the first new homes were built on fields in the 1840s. But over the course of the 20th century it was a neighbourhood that declined dramatically, particularly following the Blitz.

“Notting Hill was a notorious example of a 19th-century suburb gone wrong: dotted with cheap lodging houses, bedsits and flats ‘crawling with rats and rubbish,'” wrote Nick Barratt in his book, Greater London. “Mid-Victorian terraces that today gleam with freshly painted stucco walls were then dingy affairs with badly chipped front pillars and broken windows,” he added, referring to the early post-war period.

Spacious three and four storey Victorian terraced homes that had been home to single families, with a servant living in the basement, were bought by landlords – like Peter Rachman who travelled around between his numerous properties in his Rolls Royce – and rented out to the new arrivals from the West Indies. First they let apartments to tenants, however they found they could make more money by renting individual rooms out. Whole families who could have left behind spacious homes, with a breezy veranda overlooking the sea, found themselves in extremely cramped conditions.

Some landlords went further and let out individual beds, squeezing as many people into a single a room as they could to maximise profits. Such was struggle for some to pay the rent that there are accounts of friends sleeping in shifts. If one worked at night and the other during the day then they could halve their outgoings. Others paid for the privilege to sleep in cramped spots underneath staircases. Landlords could make back in rent almost 10 times the purchase price of these properties in a single year.

Racist graffiti was scrawled in areas such as Notting Hill indicating to immigrants from the West Indies that that they weren’t welcome. ‘No Blacks. No Dogs,’ appeared on signs in shop windows. Animal and human excrement was posted through letters boxes, along with paper doused with petrol and then set a light. West Indian immigrants were attacked in the streets and the shops they owned vandalised

One of main perpetrators of the violence was Oswald Mosley, leader of the neo-fascist Union Movement, who opened an office in Notting Hill, and handed out inflammatory leaflets. “Take Action Now…. Protect Your Jobs….. Stop Coloured Immigration…. Houses for White People…. People of Kensington, Act Now,” one shouted. Pamphlets issued by the organisation depicted black people with spears entering Britain.

George Rogers, the Labour MP for North Kensington, thought the recruitment of black police officers would help the situation, but at the same time he referred to a “tremendous influx” of immigrants with a taste for “vice, drugs, prostitutes and the use of knives”. And he wanted the government to limit the number of such “undesirables” in “overcrowded” constituencies such as his.

Things came to a head in two-weeks of race riots in August 1958 – by which time some 21,000 people from the Commonwealth were living in Britain – which began with a group of youths “nigger-hunting” in the Notting Hill and five black men were badly injured after being attacked with bars. The following week some 400 white men descended on the area and embarked on all-night attacks on black people, which culminated in a petrol bomb being thrown into someone’s home. But the police didn’t intervene.

On the third-night of violence the blacks were better prepared to fightback and had prepared their own petrol bombs. By this stage the police did intervene. And when four arrested white youths were later sentenced in court, Mr Justice Salmon told them: “You are a minute and insignificant section of the population. Everyone, irrespective of the colour of their skin is entitled to walk through our streets in peace, with their heads erect, and free from fear.”

However, despite words from the Prime Minister Harold Macmillan and others condemning the violence and saying all British citizens, whatever the colour of their skin, had then right to remain safe when they walked the streets, the mood was turning. Some opinion polls suggested that 80% of the population backed immigration controls. The Commonwealth Immigrants Act was eventually passed in 1962 and in the years that followed the legislation was strengthened which effectively closed the door to most subjects of Britain’s former colonies.

Conditions were clearly extremely difficult for many arriving from the Caribbean in the aftermath of the Second World War, however people fought hard to better their lives. Following the race riots of 1958 – perhaps the worst example of violence seen in London in the 20th century – a number of community organisations emerged. For example, Baron Baker’s United Africa-Asia League and Frances Ezzrecco’s Coloured People’s Progressive Association were set-up to provide help with housing and education.

It was from these groups that the annual Notting Hill carnival was born and was initially held in an indoor venue in Euston in January 1959. Just off Portobello Road, a blue plaque was erected by the Nubian Jak Community Trust to remember Claudio Jones as “the mother of the Caribbean carnival in Britain”. Across from this, another one recalls the contribution made by Russell Henderson, a musician and artist, in leading – with a steel drum around his neck – the first ever Carnival parade on the streets of Notting Hill in 1965.

From attracting seven thousand people in 1965, it has over the years grown to become Europe’s largest street parade, with colourful floats, marching performers, stalls and array of other attractions filing the streets every late August Bank Holiday weekend. Millions now enjoy performances from a range of different world cultures – not just West Indian.

Early on the black community also set up its own saving schemes enabling some tenants to buy houses in Notting Hill, and elsewhere in London, and therefore bypass the overcharging landlords. Three decades on some of these new homeowners, who had worked hard to do up their crumbling properties, decided to sell up.

From the late 1980s onwards Notting Hill began to change once again. Houses which had been subdivided into bedsits were converted into single occupancy homes once again, and the wealthy, including bankers were attracted back to the area once again.

With all the gentrification of recent years, many of the original black-owned businesses have gone. All Saints Road is in that respect fairly typical in that the traditional shops have been largely replaced by boutiques. People’s Sound, a long-running record shop stands out as a survivor. Along with the wonderful Caribbean-themed food stalls in Portobello Market, it is helping keep the area’s history alive. The Windrush Generation’s influence has not been forgotten. 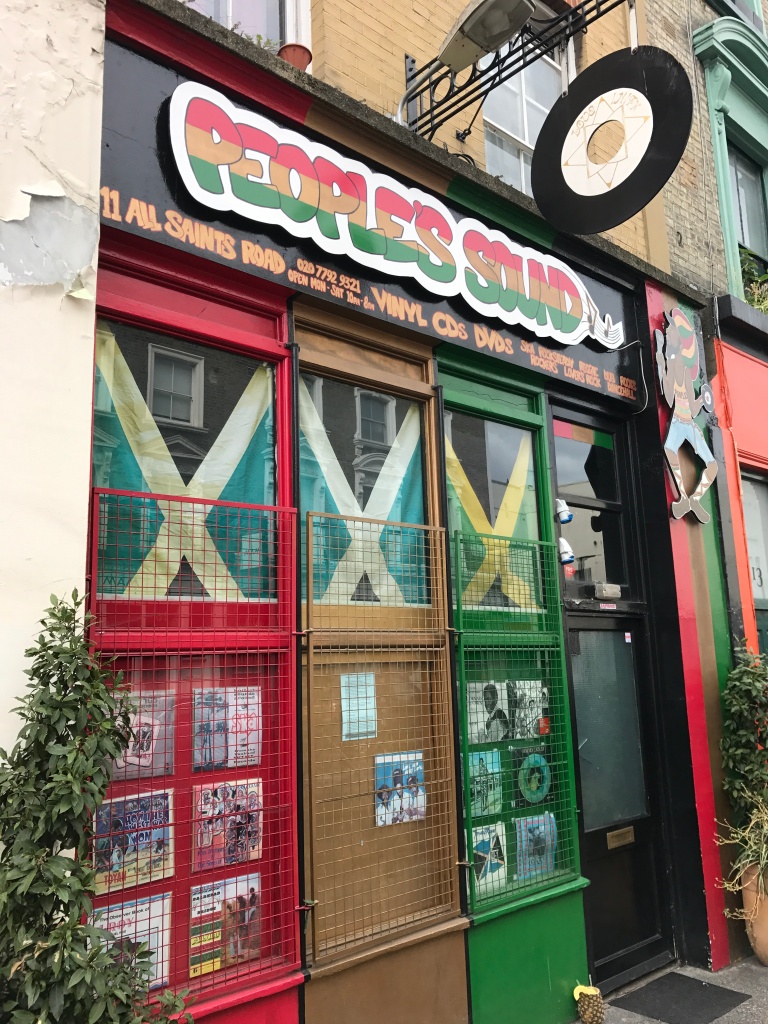 Next week on Pastinthepresent.net: Examining long-lasting divides in North Kensington through the contrasting histories of Notting Hill and Notting Dale