The podium on the outskirts of Nuremberg where Adolf Hitler addressed thousands at rallies in the 1930s remains intact. Clamber up the Zepplin Grandstand and you can see the very spot where the Nazi leader presided over an array of parades, military demonstrations, lavish productions and other events taking place across an area the size of 12 football pitches.

Beyond the podium however and most of the Zepplin Field – which featured a “light dome” with 150 searchlights pointing skyward and was the location for Leni Riefenstahl’s 1935 propaganda film Triumph of the Will – is today in a run-down state. The stands around three sides of the site are crumbling and fenced off. Much of the area used as a match day car park by fans from Nuremberg’s nearby football club. 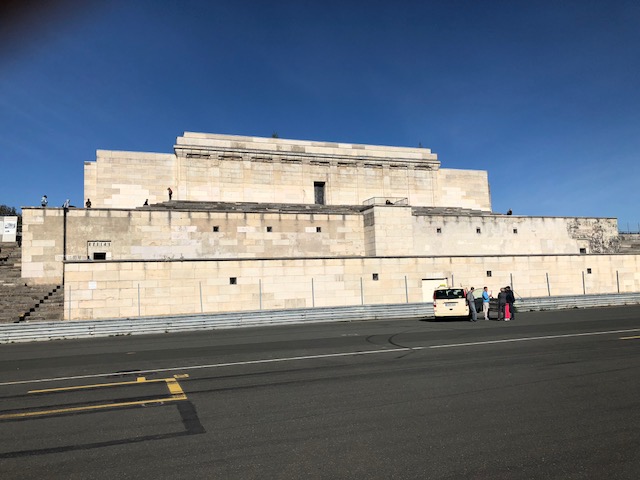 But the Zepplin Field, which featured seating for 200,000 of the party faithful, was merely one of a number of high-capacity venues designed by Nazi architect Albert Speer. Between 1933 and 1938 up to one million people came to Nuremberg each year for Hitler’s propaganda shows on the 11 kilometre square Nazi Party Rally Grounds site near Dutzendteich lake, which had been a popular destination for daytrippers since the 19th century.

The vast Congress Hall was never completed (construction was abandoned in 1939 when it was only 60 per cent finished), but it is the largest surviving Third Reich structure and was described by Hitler as a “colossus.” Intended to host 50,000 attendees during the annual week-long Nazi Party Rally, it would have been bigger and grander than the Colosseum in Rome. It is so large that tour buses can drive around the main open air arena (it was originally intended to have had a cantilevered steel roof). The structure’s brick exterior walls are a metre thick and overlaid with granite. 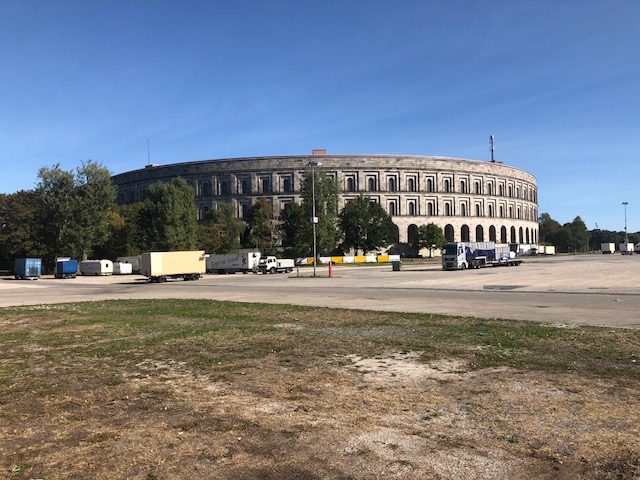 At the northwest edge of the site was the Luitpold Arena where stands were built between 1933 and 1936 (although earlier Nazi Party Rallies had been held on the site). It was converted into a park, but a concrete precinct called the Hall of Honour for the Fallen of World War War which was adapted by the Nazis in 1929, survives. Black and white photos on boards surrounding the structure show Hitler standing at this spot. 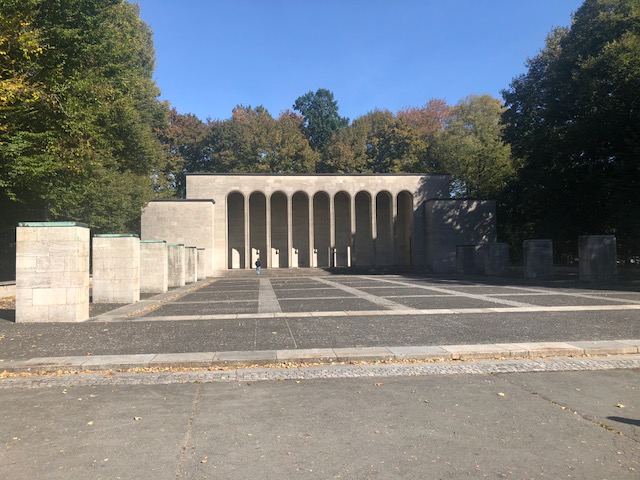 Hall of Honour for the Fallen of World War War

Cutting through the rally grounds was the 60-metre wide Great Street, which was intended to be the central marching street. The 1.5km route was designed to link military exercise grounds with the imperial castle in Nuremberg’s old town. As the city of Nuremberg has developed much of the Great Street has been lost, but around the former rally grounds site much survives.

Nuremberg enjoyed an important position in the Holy Roman Empire – the First Reich – and was one of the the locations for the medieval Reichstag. Hitler sought to emulate the glories of the past and talked of the the Third Reich ruling for a thousand years, so it was only natural that the Nazi rallies should be held in the city.

Parades stretched from the old walled town right out to the rally grounds. And although more than 90 per cent of the buildings were destroyed by Allied bombing raids in 1945, it is hard to ignore the previous uses of many structures. For example, the Hitler Youth stayed in what is now a youth hostel near the imperial castle and the Park Plaza hotel was originally built for Nazi party officials.

Nazi rallies were first held in Nuremberg in 1927 and 1929, but it wasn’t until the following decade that the purpose-built venues were created. The new structures used natural stone and brick from some 280 companies. Forced labour living in SS-built concentration camps worked in terrible conditions to quarry the required materials.

“Whether thrilled or appalled, no visitor from overseas could failed to be bowled over by the sheer scale of the pageantry,” wrote Julia Boyd of the Nuremberg rallies in Travellers in the Third Reich. “The incessant marching and beating of drums, the sweeping of searchlights, flaming torches, and thousands upon thousands of gigantic red and black swastikas flapping in the breeze, were all skillfully deployed to pay homage to the one supreme chieftain, the demi-god pre-ordained to lead his tribe out of the darkness to its rightful place in the sun.”

Boyd quotes from the memoir of Michael Burn who wrote to his mother in 1935, when he was a journalist writing for the Gloucester Citizen. “The Party Rally finished this morning,” he said in his letter. “I cannot really think coherently after this week. It has been wonderful to see what Hitler has brought this country back to and taught to look forward to. I heard him make a speech yesterday at the end of it all which I don’t think I shall ever forget and am going to have translated.” So many were won over by Hitler’s great show of propoganda.

After the Second World War attention turned to not only re-building the heavily bombed city but also delivering justice. Take a short riverside walk, west from the old town and you can visit Court 600 where Nazi war criminals were tried for crimes against peace and humanity. Between 1945 and 1946 22 Nazi leaders were convicted and sentenced – 12 of which were executed. There’s a comprehensive exhibition at the complex which explains the process.

But back at the former Nazi Party Rally Grounds big questions remain about what should be done with these structures. Various schemes have been proposed over the years for the Congress Hall including converting it into a shopping mall and concert hall. Today, aside from being visited by tourists the city council uses it as a storage depot for construction materials. Part of the uncompleted building has occupied since 2001 by an insightful museum, the Documentation Centre Nazi Party Rally Grounds.

Like the fenced-off stands surrounding the Zepplin Field, parts of the Congress Hall are crumbling and so have been closed off to the public. The rally ground structures have been protected since 1973 as a historic monument and can’t be pulled down. But if nothing is done to preserve them soon then they’ll crumble on their own accord. It is of course a sensitive issue because a considerable amount of taxpayers money would be required for the renovation project.

What was intended for the Nuremberg Nazi Party Rally Grounds was megalomania on an unprecedented scale. It is important that the structures remain accessible to the public, so that what happened here – and the propaganda displayed to deceive the German people – is not forgotten by future generations. 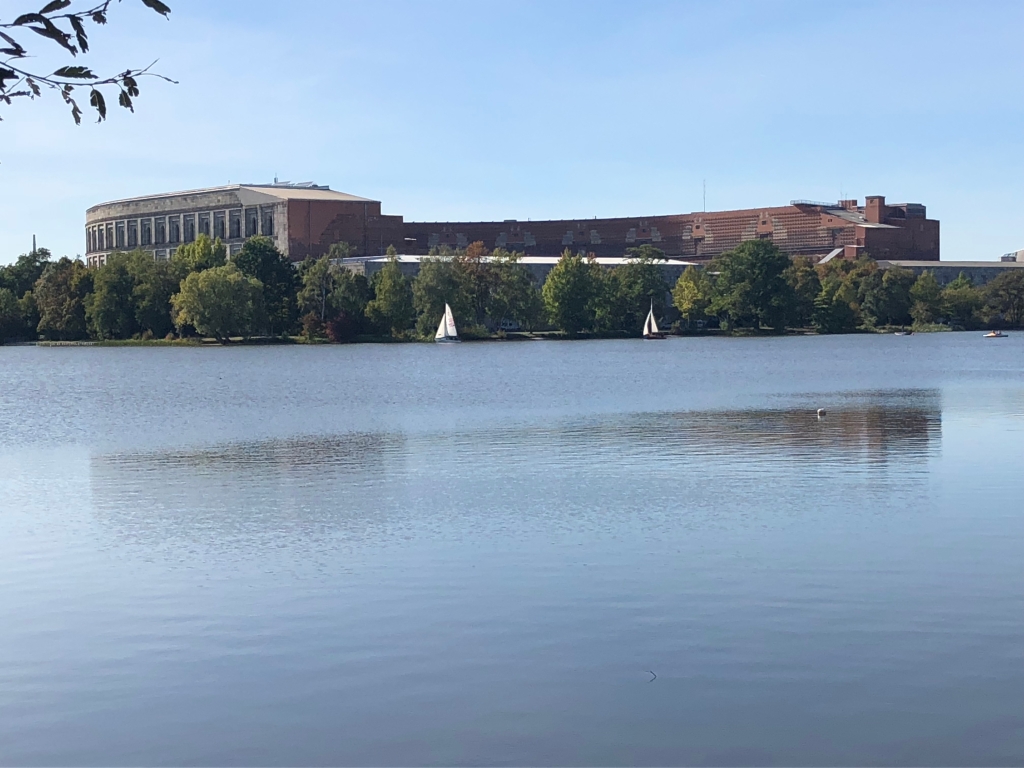