“Who is this Donald Trump? I’ve not heard of him.” There can’t be many in the US today that haven’t heard of their President, but in Plymouth Colony the residents seem to be confused.

Exploring this dusty Massachusetts village, with a row of single-room thatched family homes built on either side of the street leading down to the harbour, it’s time to forget its 2018 and turn the clock back to 1627. The settlement has been re-created as it would have looked seven years after the first Pilgrims arrived from the England after a long sea journey on board the Mayflower.

At the top of the village is the Fort/Meetinghouse wooden structure which on the ground floor was where religious services were held. On the first floor canon were stationed. From the upper platform, you get a beautiful view of the Cape Cod Bay beyond the edge of the settlement, where the waters provided a rich source of fish for villagers. Just outside the outer defence was farmland where most toiled away during the day in the fields.

Plymouth Plantation is a museum three miles away from downtown Plymouth which is unlike most others around the world. There are few information boards here, so to find out what life was like for those who arrived on the Mayflower and subsequent ships almost 400 years ago you need to approach the characters in 17th century costumes. 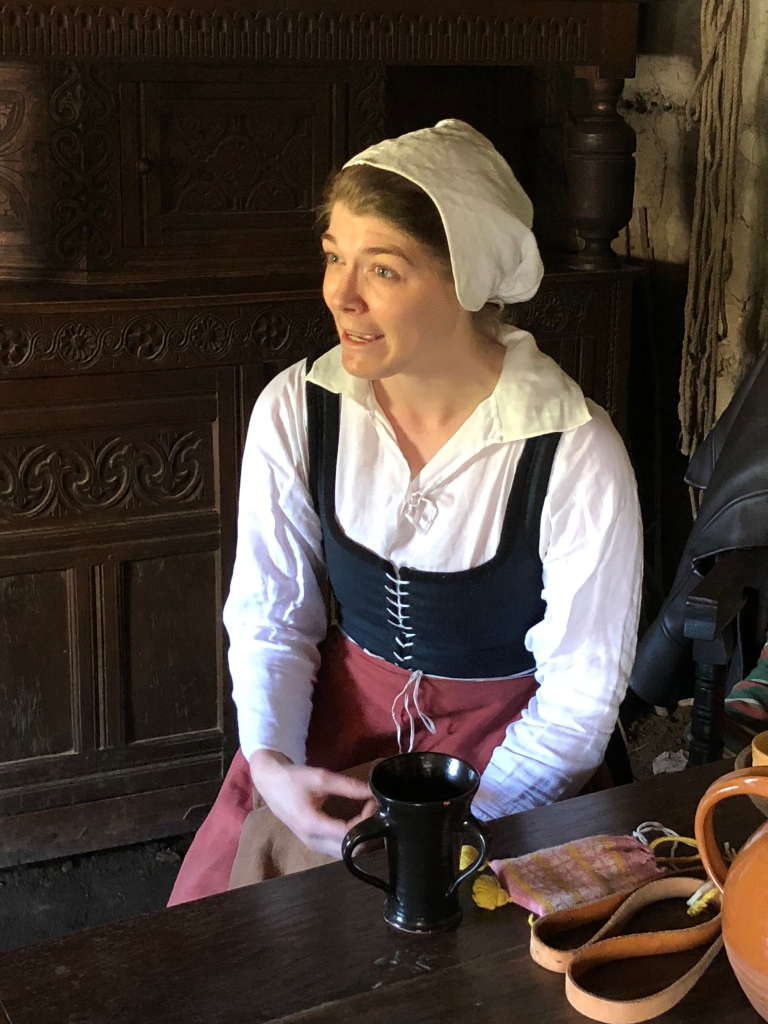 You can ask them any question you like. Why did they decide to leave England for a new life in the World? What was it like to travel on cramped ships for weeks on end? How did they survive in this new land when they first arrived?

The answers provided on 17th century life will be very full and detailed. But ask them for their views on the 45th President of the United of America – as I saw one visitor do – and you’ll get some confused looks.

The Plymouth Colony story really begins in 1606 when a group of English dissenters decided to form their own church in Scrooby, Nottinghamshire. Many at the time wanted to purify the church, but this group was different in that they actually wanted to separate from the Church of England.

Fearing religious persecution, the congregation decided to emigrate to Holland in 1609, settling first in Amsterdam before moving on to the town of Leiden. The group followed a life based on godly preaching and the reading of scripture.

But while Holland could offer the separatist religious freedoms, as immigrants they were restricted as to what jobs they could hold and suffered economic hardship. Some therefore made the decision to transplant their church to a new settlement in America. Others from the congregation were to remain in Holland.

The separatists were awarded a patent by the London Virginia Company in 1619, allowing them to settle at the mouth of the Hudson River. They were backed financially by a group of businessmen in the City of London called Merchant Adventurers who viewed the colony as lucrative investment. The settlers needed to send goods back to their paymasters back home, but as part of the deal they would inherit land in Plymouth after seven years.

After lengthy delays, the Leiden congregation finally left the Dutch port of Delfshaven on board the Speedwell in July 1620. They went to Southampton where they met the Mayflower and other passengers who had been recruited by the Merchant Adventurers to provide practical help to the new colony and became known to the separatists as “The strangers”.

There were more delays and so it wasn’t until August 5th until the Mayflower and Speedwell set off, with 90 and 30 passengers respectively. But the Speedwell encountered problems and after attempted repairs at Dartmouth and Land’s End, it was finally abandoned at Plymouth. Some passengers gave up on their attempt to emigrate, while others squeezed onto the Mayflower.

When the Mayflower finally left Plymouth on September 6th 1620, there were 102 passengers on board – half of whom were separatists – as well as 30 crew and even two dogs (they were the only animals mentioned specifically as passengers, but some have suggested goats, pigs and chickens were carried as well). For the next 66 nights, they were all squashed together on the compact, 106 foot long ship.

After 1,500 miles of good weather, the Mayflower encountered violent storms. “As the ship was tossed on mountainous waves the passengers thought though the wild sea would drag them to their deaths,” wrote Rebecca Fraser in her excellent book, The Mayflower Generation. “The men held on to their wives, and the wives sheltered their as were thrown backwards and forwards. Water was everywhere, soaking their hair and in their mouths.”

Land was spotted off the coast of Cape Cod on November 9th 1620 and two days later the Mayflower anchored at Provincetown Harbor. Winter was closing in and they were running low on provisions, so they abandoned their intended plans to carry on to the Hudson River.

In absence of a royal charter, it was at Provincetown that 41 separatists signed the Mayflower Compact while still onboard the ship as it lay off-shore. This now famous social contract set out the rules detailing how the new colony was to be governed. As Rebecca Fraser has noted, the formation of the what would become Plymouth was “revolutionary”:

“Plymouth Colony was the first experiment in consensual government in Western history between individuals with one another, and not with a monarch. The colony was a mutual enterprise, not an imperial expedition organised by the Spanish or English governments. In order to survive, it depended on the consent of the colonists themselves. Necessary in order to bind the community together, it was revolutionary by chance.”

Plymouth Rock is the spot, just a few minutes walk from Plymouth’s Main Street, where the Pilgrims might have come ashore on December 21st 1620. Whether or not it is the accurate location (the historical evidence is debatable), visitors certainly come here in their droves each year to see a piece of granite (inscribed with ‘1620’) under a Victorian era shelter.

Stretching up the hill from the serene waterfront – where on a stroll along you can see yachts bobbing around in the sea – takes you to the first streets where the first settlers’ houses were built. Leyden Street (originally called First Street, but re-named to remember the town in the Netherlands where the Pilgrims sought refuge) claims to be the oldest continually occupied street in North America.

None of the houses on Leyden Street are original, but many have plaques remembering the first structures that once stood here. One records that a property was built on its site in 1621, noting that it was one of seven dwellings – in addition to the house occupied by the Governor that was built in the first year. Another building notes that it stands where originally was the ‘Common House’, the settlers’ first meeting house and a place where families stored their provisions. Construction of the wooden building had started on Christmas Day 1620.

After three days of surveying the coast, the Pilgrims set foot upon land at Plymouth – attracted by the protected bay and the provision of fresh water from Town Brook. Although the village they settled in was uninhabited at the time, the presence of cleared already fields suggested they weren’t the first people to live here. The Wampanoag People had lived in this part of New England for more than 12,000 years, but many of their settlements (including Plymouth) had been wiped out by a devastating plague of 1616, which was brought over by Europeans.

The Pilgrims began marking out plots of individual families in January 1621, but the actual initial homes were pretty primitive. “Some of the shelters were made of little more than branches,” wrote Fraser. “Their first homes were very fragile, frame houses filled with wattle and daub.” And by the end of February five cannons were installed at the top of Fort Hill, providing defence for the settlement.

Of the 102 passengers that came over to Plymouth on the Mayflower, some 50 did not last the first three months. On Cole’s Hill stands a monument to those who died in the plantations first year, with the names of those unlucky souls etched onto the front. It was erected by the General Society of Mayflower Descendants in 1920 on the very mound where the settlers had been buried in unmarked graves.

When the Mayflower landed at Plymouth passengers initially returned each night to sleep on the ship. Some, such as the sick, stayed on board longer than others. But in March 1621, the last finally left the ship and the following month it sailed back to England. The last record of the Mayflower was an assessment of her value in 1624, but then she disappeared from history. There are a number of places in England that claim to have pieces of the original ship, yet there is little supporting evidence.

Fast forward to 1957 and a replica of the Mayflower crossed the Atlantic, before being moored as a visitor attraction in Plymouth. Sadly when I visited it was away from its usual spot for renovation work.

On the waterfront in Plymouth there’s a statue to Yorkshire-born William Bradford – a historian whose written accounts leave us with a vivid picture of life in the fledging settlement. But as well as writing history, he also made it given he was made Governor in 1621 and elected 30 times – serving for all but five years up until 1656.

But had it not been for a peace treaty made in March 1621 with Massasoit, the leader of the local Indian tribe – the Wampanoags, it is unlikely the colony would have survived its early challenges. The alliance was brokered by Squanto, who had traveled in Europe and was the sole survivor from the Patuxet tribe, which had previously lived in this area.

Edward Winslow wrote that the Pilgrims celebrated their first harvest in October 1621 “by rejoicing in a special manner”, with Massasoit joining “some ninety men” for a feast that lasted the days. In the 19th century this became known as ‘the First Thanksgiving” and the occasion is still celebrated in America to this day.

Plymouth Plantation has chosen to depict its English village as it would have been in 1627 given the rich historical sources that were for that year, but also because after that colonists started moving to elsewhere in Massachusetts. Indeed, during the 1630s – when some 2,000 people lived in Plymouth – seven new towns were created in the state and the capital was established at Boston.

After 1630s relationships broke down between the English and Wampanoags, culminating in 1675 with the ‘King Philip’s War’. Plymouth became part of the Dominion of New England in 1686 and the colony was formally disestablished in 1691. Attention may have then moved to elsewhere in Massachusetts, but the foundation of New England’s first sizeable permanent settlement has not been forgotten. 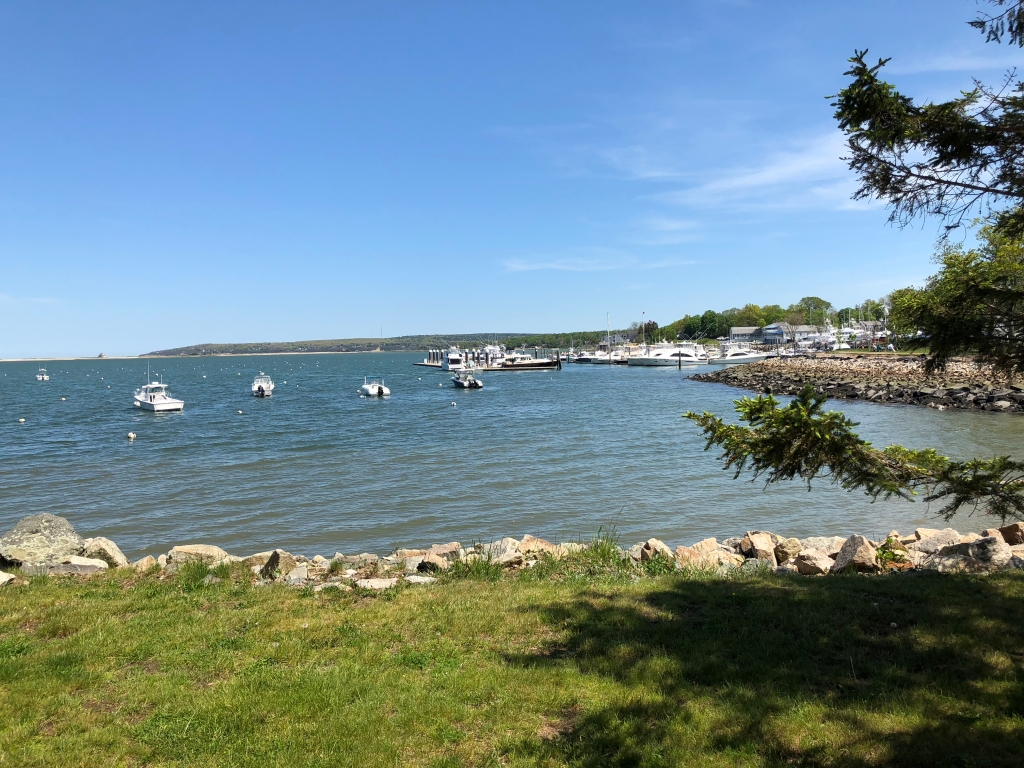