If you live in London or visit regularly then there’s a good chance you’ve been to Victoria train station. It’s a useful place linking the capital with the likes of Dover, Brighton and Gatwick Airport.

But although Victoria has a wide range of shops, bars and food outlets, for me it looks shabby, especially when compared to the newly renovated St Pancras or King’s Cross termini. The adverts hanging from the ceiling and many of the kiosks on the concourse at Victoria are particularly gharish. It is a station in need of a make over.

Strip away the modern tat however and you have a wonderful building that is over 100 years old, taking us back to the time when two rival companies operated from Victoria. Look carefully from the outside and you will see that it is in fact two separate stations were knocked together when the amalgamated Southern Railway was formed in the 1920s.

This afternoon I went on a walk, part of London Walks’ termini series, exploring this fascinating building and the area surrounding it. The guide Rachel was bouncing with energy as she told the story of how two companies (the London, Brighton & South Coast Railway and London, Chatham & Dover Railway) launched services from neighbouring stations in 1860.

For somewhere I’ve passed through so many times, I haven’t appreciated what an important role Victoria has played in British social history. There have of course been the commuters coming in to the capital daily from Sussex and Kent for many years. But it’s Victoria’s long running link with the continent that is particularly interesting.

In the days before the Channel Tunnel, countless British troops travelling to and from the front line in the 20th century wars used Victoria as their gateway from London. On the return leg many soldiers arrived back at station injured.

Many would have also set off on their first foreign holidays from Victoria, through for example the ‘night ferry service’ which from the 1930s to the 1980s allowed passengers to set off at 9pm and then arrive in Paris early the next morning. First class passengers didn’t even need to get off when they reached Dover as their luxury sleeper carriages would be put on to the boat for the Channel crossing.

Ever since Gatwick airport opened in the late 1950s, people have travelled from Victoria to begin their air journeys (an early form of the Gatwick Express began in 1958). At one stage it was even possible to check in for flights at the station, a service used by hundreds of thousands of people in the 1960s.

The walk also covered the area surrounding the terminus. We heard for example how near the station there was a large prison from the 1600s which reinforced the down and out position of Victoria. The presence of numerous social housing projects is testimony to just how poor many inhabitants were.

But the closure of the prison in the 1880s, when half the land was sold off for residential development and the other part given over by the Catholic church so that Westminster Cathedral could be created, helped the area move up.

We visited today some amazing peaceful squares just a few minutes walk from the busy platforms and concourses.

Vincent Square for example was started in 1810 and at one point boasted four hospitals. Once these moved out it became more popular with wealthy residents. Today one of the former hospitals is the upmarket Rochester Hotel and Westminster School has its playing fields in the square outside.

Back at Victoria station itself, the rivalry of two railway companies has returned, with both Southeastern and Southern operating services. There may not be a wall down the middle but their trains do leave from opposite ends of the concourse.

Work to return the station hotel (first opened in 1860), the Grosvenor, to it’s former glories. After years of neglect, it is welcoming upmarket guests who want a taste of luxury. Now it’s time for the rest of the station to be refurbished to bring it in line with the other great termini in London. 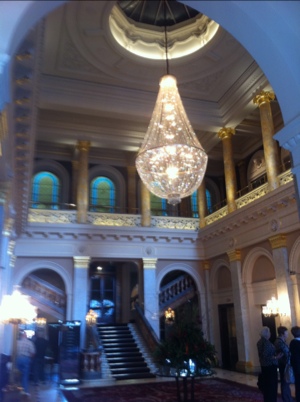 The wonderful interiors of the Grosvenor Hotel

An early route map, uncovered when some phone boxes were removed