Che Guevara follows you around in Cuba. His stylised visage pops up on everything from t-shirts and billboards to bank notes and postcards as you travel across the Caribbean island.

But nowhere is Che – the second in command to Fidel Castro during the Cuban Revolution – more prevalent than in Santa Clara, where his mausoleum’s stands on the edge of the city. His remains lie behind a simple stone bearing his name in a dimly lit room underneath a large statue of the fighter set on a vast grandstand. 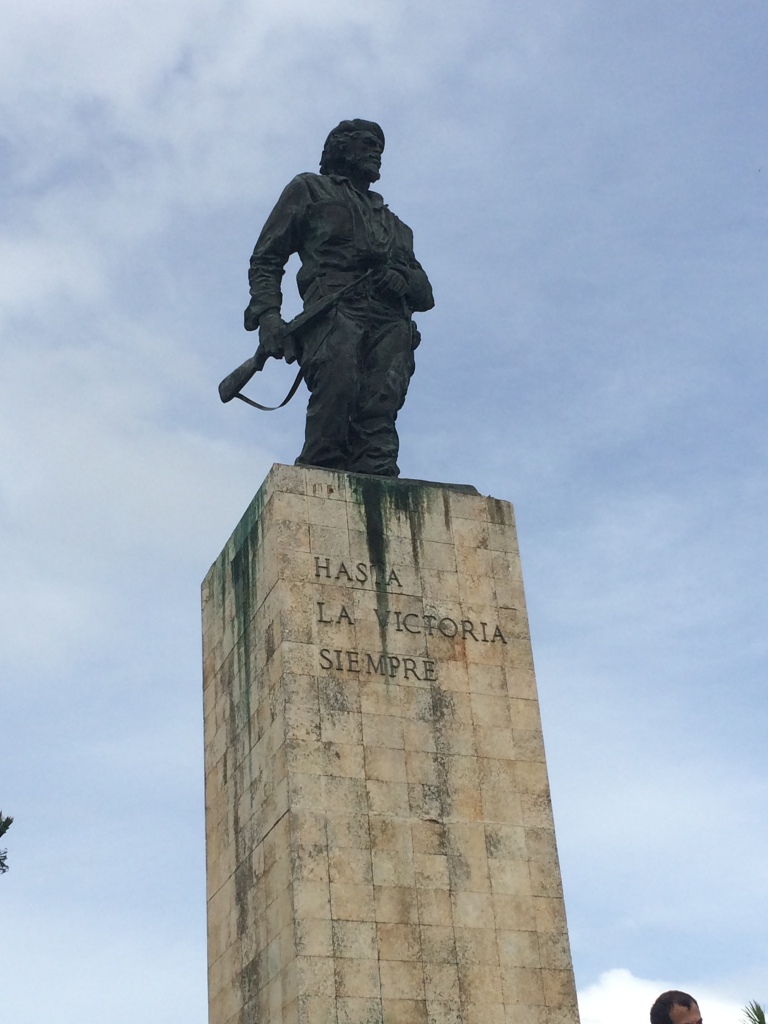 Just a few hours bus ride from Havana, this was the first stop on my travels around the western half of Cuba (after which I would carry on to Trinidad, another few hours by bus).

While the city itself is gloomy and uninteresting, the vast concrete complex containing Che’s mausoleum also has a small free museum remembering his life as a revolutionary through a series of artefacts, ranging from his inhaler (he had asthma) and camera to clothes and books he read. It’s the triviality of many of these that demonstrates what an important role Che’s memory occupies in modern Cuba life as a symbol of the Revolution. 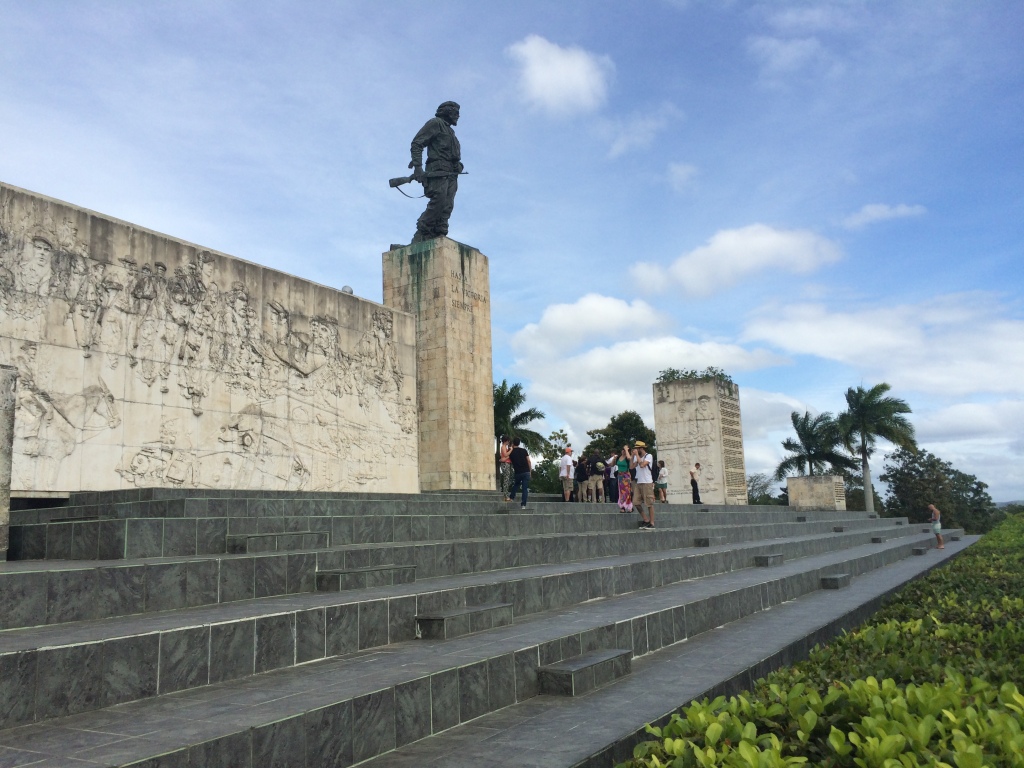 Guevara (born Ernesto Guevara) secured the strategically important central city of Santa Clara for the Revolution on 28th December 1958 following some particularly tough fighting. Just a few days later, in one of the last military encounters of the Revolutionary War between Fulgencio Batista and, the rebels, Argentina-born Marxist’s men derailed an armoured train moving troops to the centre of the island and 408 government officers and soldiers surrendered. On January 1st Batista realised that the game was up and fled by private plane to the Dominican Republic.

Wagons from the derailed train lie on the outskirts of Santa Clara and in four of these you can see various exhibits, including uniforms and guns from this momentous event. It is popular with tourists, but as with many museums in Cuba there is little interpretation as to exactly what happened.

Guevara had first met Fidel and Raul Castro in 1955 in Mexico City – where the latter had fled following a previous attempt at overthrowing the Cuban government. Here – as the 26th of July Movement – they gathered support and resources as they prepared for a fresh invasion attempt.

The rebels were united in their determination to overthrow the Batista regime, which – as discussed in a previous blog – was deemed to be corrupt and in cahoots with the Mafia. Although technically Cuba has achieved its independence in 1902, to Castro and his revolutionaries it had just been a case of transferring rule from one colonial power (Spain) to another (the US). Indeed, during the first two decades of the pseudo-republic four corrupt Cuban presidents came and went, with the US intervening on a number of occasions. 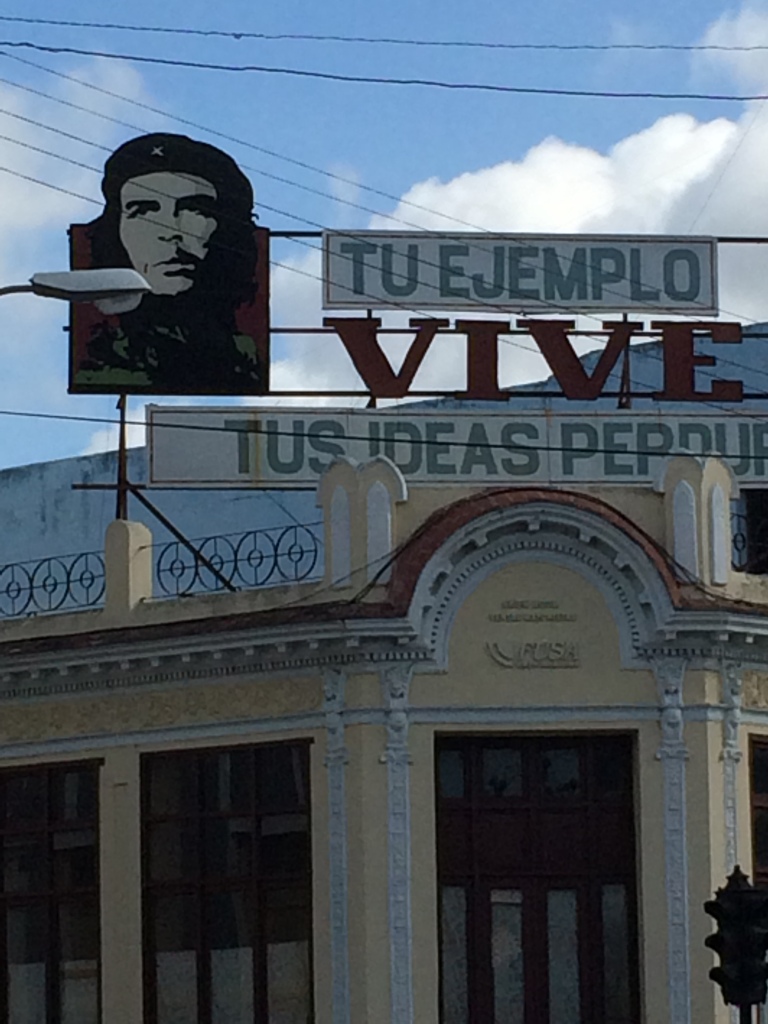 Some 80 revolutionaries sailed to Cuba in November 1956 aboard an overcrowded yacht called Granma (which is preserved in a compound outside the Museo de Revolucion in Havana), following a rough crossing to Santiago de Cuba, on the far eastern side of the island. Batista’s men spotted the vessel and only 12 people managed to escape (including Fidel Castro, his brother Raul and Che). The survivors led a two-year guerrilla campaign, winning over support from local people.

In post-Batista Cuba, Guevara became the president of the country’s national bank and was also responsible for at least 550 executions of those who opposed the new regime. He guided Fidel Castro towards alignment with the Soviet Union and attempted to bring diversify to the Cuban economy so it didn’t merely rely on sugar. This proposal was rejected by other leaders and became less important anyway once the superpower agreed to buy large quantities of the raw material at artificially high prices.

Guevara had ambitions for exporting the revolution, including fighting right-wing administrations in Latin America, Angola and Congo where – in the case of the latter – he believed “victory there would have repercussions throughout the continent.” But while the Marxist hoped for a global swing to the left, he frequently started to encounter fighters who merely wanted change in their own country – and weren’t interested in causes further afield.

The 1965 Congo campaign, where Guevara was defeated and needed to make a hasty re-treat was an all-time low. “All the Congolese leaders were in full retreat, the peasants had become increasingly hostile. Yet the idea of finally abandoning the territory, going out by the way we had come in, and leaving the peasants defenceless…. all this made me feel pretty bad.”

Eventually Guevara’s luck ran out and he was captured and executed in Bolivia in 1967 where he had gone to lead forces rebelling against the government. The killing had been the result of US assistance, but it was in some ways a blessing for Fidel Castro who was under pressure from his Soviet Union to clamp down overseas campaign.

Guevara was buried at a secret location in Bolivia and it was only in 1997 after a 30 year search by archaeologists that his remains were reburied at Santa Clara alongside his fallen comrades from Bolivia. Today, Guevara has become a popular symbol of not only the Cuban Revolution, but also that of rebellion all around the world.

Tomorrow: I find out more about what was once Cuba’s most import industry – sugar production – and how the wealth it created transformed a town.

Another Che image in Cienfuegos