Walking down Upper Street in Islington would give you the impression that the borough is extremely wealthy. On any day of the week, the upmarket restaurants and shops on this busy stretch seem to be booming.

But not all of Islington have been taken by the elite as Packington Estate, off Essex Road testifies. It was acquired by the local council in the early 1960s, but there was much debate as to whether the existing Victorian terraced housing should be saved – or demolished and re-built. And in an area where there are so many plush homes, it continues to offer residents affordability.

Residents campaigned five decades ago for Islington council to take over the 10-acre Packington Estate because the private owners had served intention to quite notices to a number of tenants as they wanted to start re-developing the properties. “This estate is in danger of becoming a ghost town,” one resident told the North London Press in 1962. “The real victims of this atmosphere of uncertainty are the old people – a lot of them live alone. Also worried are the sub-tenants, some of whom are now the only occupants of houses which have been given up by the former sitting tenants.”

But once in the council’s hands and plans unravelled for the estate to be re-built, not all were happy. “This is not a slum area,” declared councillor Harry Brack in 1964. “The council bought the estate to protect the tenants, not to build another estate.”

“To pull down these houses would be a national scandal,” Brack added in his interview with the North London Press. “I will fight this thing tooth and nail in the council and outside.”

Richard Crossman, Labour Minister of Housing visited the area after a government inspector turned down a compulsory purchase order for demolition on account of hearing 426 objections at a public inquiry. “It wouldn’t become as good as Canonbury but could be a second-class Canonbury,” the politician said, indicating he wanted it saved. Canonbury Square had seen “gentle social and structural decline” since the turn of the century, one commentator had said, but it was starting to improve.

Crossman would have been able to see the dissatisfaction with tower blocks being built elsewhere and claims many of the Victorian houses were perfectly decent (as I pointed out in a recent blog on Deptford), but was then told that the current tenants would be evicted even if Packington Street was saved and so he changed his mind. “This shook me: and since I didn’t want to turn it into a completely middle-class area I finally agreed”.

The new Packington Estate, which consisted of 538 flats or maisonettes set in six-storey slab blocks, was completed in the 1970s. Built around Packington Square, yet set back from the road and featuring sunken lawned gardens, each home opened onto to walkways at pavement and third-floor levels. The “design of the scheme – with blocks set in squares and excluding traffic – was inspired by Georgian squares with the idea of giving adults and children room to meet, sit and play,” it was reported at the time.

One report in the North London Press in 1968 got particularly caught up in the euphoria of the new development, with suggestions that new residents “will find life on the new estate a far cry from the 90-year-old dismal dwellings which they now occupy. Instead, they will have modern, centrally-heated flats leading on to wide walkways, and overlooking traffic-free green squares where their children can play.” The report went on to add: “Lifts will be provided to reach the upper walkway so that mothers with babies will have no trouble in getting their prams up to their flats”.

Not all were so positive however. “On their own, the new blocks are not too bad,” wrote Judy Hillman as Packington Square neared competition. “But as can be seen here they are out of scale, particularly with a decimated Union Square. And, with their access balconies and communal shared open space, they bear the indelible stamp of municipal homes, a label that old Packington restored would have quietly shrugged off.”

But walk through the Packington Estate today and you will find that a number of the slab blocks have gone, while others are surrounded by hoardings and are awaiting demolition. It’s quite surreal walking past the doomed buildings as it appears – on account of tell-tale signs like washing hanging outside – that some units are occupied, while others have been vacated. 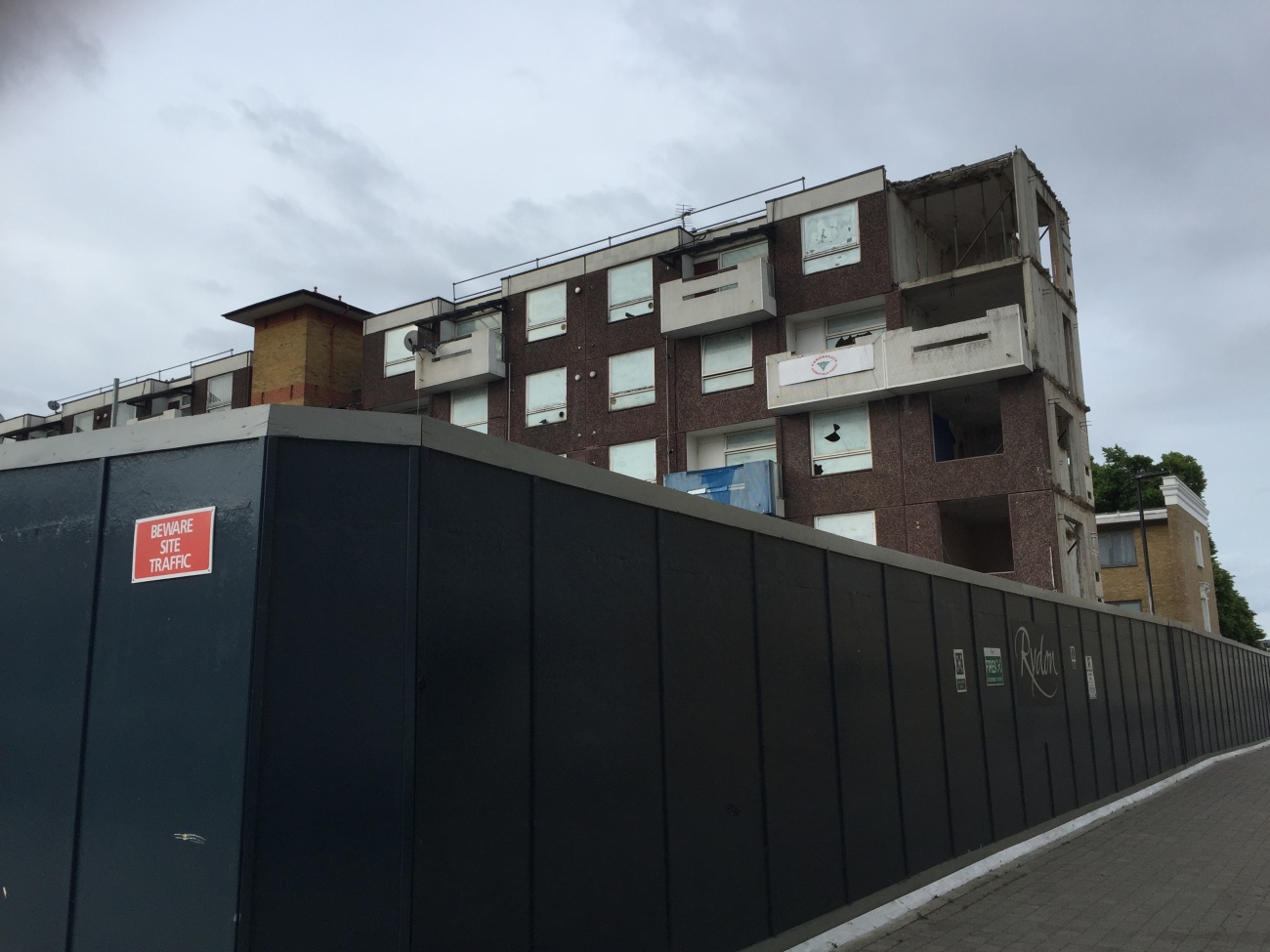 It wasn’t long before the design faults of the Packington Estate – like many 1960s-built developments – became apparent. By the 1990s, there were concerns about security, privacy for residents and the flat roof just wasn’t practical. And a feasibility report, noted that the “small shopping centre…. is in a very run down condition”. It was then revealed that properties did not meet the building regulations which had been updated

Hyde Housing Association took over ownership of the decrepit estate in 2006 following a ballot by residents and re-development began the following year. The group committed to re-building all the existing homes, while at the same time ensuring that the existing residents would be re-housed. It is not yet complete, but the scheme has in recent years won notable praise from housing experts and have won design awards.

Packington Estate is just a few minutes walk from trendy Upper Street, while in the other direction is the highly sought after Regent’s Canal. And the development is surrounded by streets of fashionable and expensive Victorian terraced houses coveted by wealthy City workers that survived the bulldozers in the 1960s. Yet thanks to Hyde, families on low incomes can enjoy the area given the sub-market rents on 491 of the 791 homes (the remainder will go onto the private market).

Such are the high building standards at the Packington Estate, it is in fact hard to tell the difference between the new townhouses being built for private owners and those allocated to housing association tenants – the latter paying perhaps a quarter of the rent.