For the last three weeks, I’ve posted a series of blogs focusing on the lasting legacy of some of Cambodia’s sometime extremely dark history, namely the Khmer Rouge, as well as more ancient times during the Khmer Empire. The country continues to face problems and progress is blighted by corruption that goes to the very heart of the government.

But despite the struggles that many Cambodians face on a daily basis, it was the warm smiles displayed by local people and the general helpfulness that truly stands out for me from my trip. The country is embracing tourism in a big way, yet it is the acts of kindness displayed by individuals that will truly make it successful in the long-term.

It is fast-becoming a country of contrasts. In the big tourist centres, luxury hotels have all the facilities that visitors would find anywhere in the world. But then head out into the countryside where the landscape is dominated by rice fields and families live in single-room wooden houses (sometimes raised on stilts to protect during floods), with their washing hanging outside. You find markets selling fresh fruit and other useful foodstuffs, yet it is also possible to buy barbecued tarantulas, scorpions and even rats. Cambodians consumed this sort of food out of necessity to stay alive during the time of the Khmer Rouge, however it still seems some people eat it today.

And aside from the big must-sees when visiting Cambodia, I was lucky enough to experience local life at some community-led projects that are creating jobs for local people. In my final post from the country, here I chart four memorable discoveries that are slightly off the beaten track.

I made a stop on our way to Siem Reap at Kompong Pluk loating village, a community of some 500 wooden-built homes raised 15 or so metres from the ground to keep residents dry when the surrounding rice fields flood. Some had made a real effort to beautify their properties by lining their terraces with colourful flowers and painting the wood. The village, about an hour’s drive from Siem Reap, also contained schools, shops, restaurants, guest houses and even churches which were all built on wooden stilts.

To get into the heart of the village we needed to take a short boat ride along the river, where families lived their lives doing their cooking, washing and repairing their own vessels on the earth banks, lined with trees. On dry land, we were able to walk down the bustling high street which in the rainy season wouldn’t exist. Children wouldn’t be able to play games in the street and villagers would be force to get in a boat to visit their neighbours living a few metres away.

Back on the boat, we headed further along the river and out into the big lake connecting numerous floating villages in this part of Cambodia. The driver switched off the noisy engine and what can only be described as a floating bar, operated by an oldish looking Khmer lady sold us cool beers from her boat. Enjoying these in the late afternoon sun on the top deck of our narrow boat was pure bliss.

In the western world weddings can become highly stressful occasions to organise, with guest invites and table plans created months in advance in an attempt to make everything run to a tight schedule on the day. For Cambodian families, it seems that things are much more free and easy. I was fortunate enough to be able join a wedding in a village near Siem Reap where the family set-up tables for us in the marquee at short notice and brought us endless food and drink through the evening.

It’s probably worth taking a step back to explain how I had ended up at the wedding in the first place. Our guide who was showing us the area mentioned that he was going to the occasion – celebrating the marriage of a family friend – in the evening and then casually asked whether we would like to join him. We did and so arranged tuk tuks from our hotel in Siem Reap and headed out into the countryside. 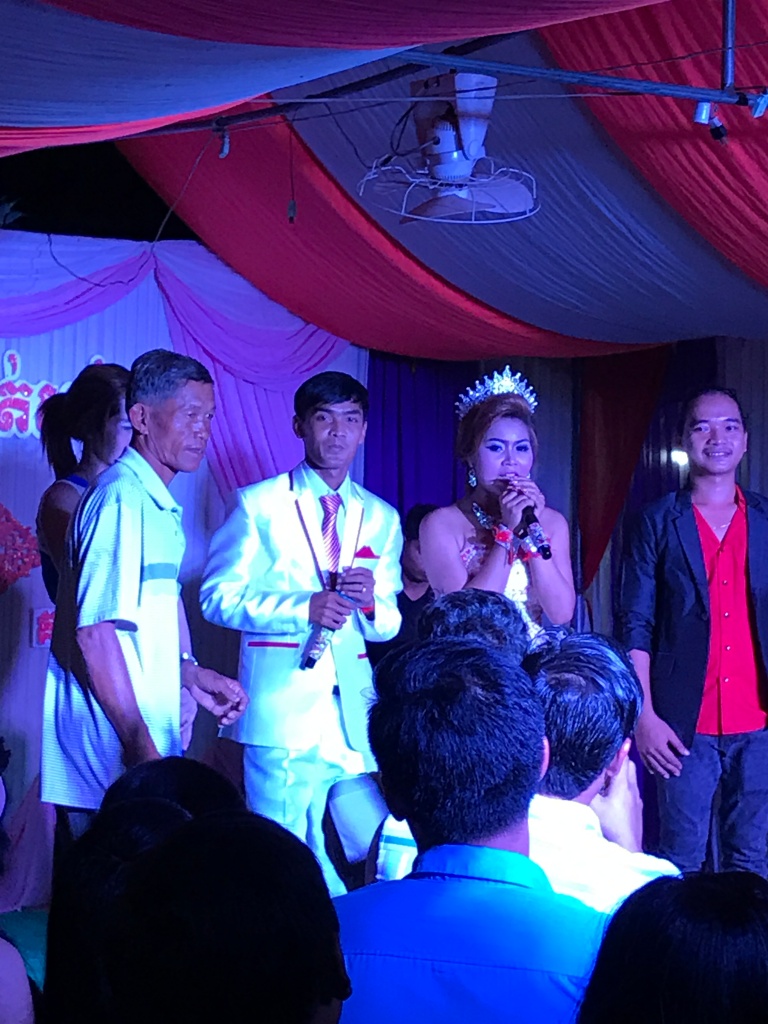 Down an unlit, unpaved road, we found the brightly wedding party which was taking place in a marquee set-up in front of the father of the bride’s house. We were ushered to our table and as we served delicious curries and grilled meats, the bride and groom came to talk to us (they spoke a few words of English). They seemed genuinely pleased that we had shared their special day with them.

The party grew increasingly lively over the course of the evening. Guests were invited to take to the stage and perform songs for the newly married couple, naturally some were better singers others. And then every now and again the bride and groom appeared in a fresh outfit on the platform themselves and made a short speech. We couldn’t understand what they were saying, but then the drunken revellers on the dance floor in front seemed to approve of what was being said.

For the ultimate in Cambodian rail experiences, jump on the bamboo train. Your seat is little more than a thin cushion placed on a wooden platform in front of the driver operating a simple petrol powered engine. The guidebooks tell you that the trains move at 15 kilometres per hour, but ours seemed to be going a lot faster as it rattled along the stretch of bumpy narrow gauged track.

The French built the line in the 1930s to connect the Cambodian capital Phnom Penh with Bangkok, but the trains were then used to transport goods, such as rice, rather than passengers. They didn’t originally have engines; the driver needed to use the piece of bamboo to heave it along. But after many years of service the line fell into disrepair and was largely abandoned. Luckily for visitors today, the main infrastructure – including small bridges over rivers – remains.

I travelled on a short section of track which has been re-opened by the local community near Battambang, Cambodia’s second biggest city. Given that the train doesn’t have any sides or a roof, you have a perfect view of the surrounding area, which consists mainly of open fields and simple single story houses. Local children run up to the trains and wave at the passengers as they pass by. It’s mostly used by tourists, but I did see one being used by a group of orange-robed monks heading to a local village.

Being a single track, trains can’t pass each other, so they need to be quite literally lifted off the rails by the driver. The wooden platform is removed first, followed by the two sets of wheels. Passengers then need to wait on the side with these components for the other train to pass before it can be reassembled. I travelled in a convoy of three trains, so we were (mostly) given priority over the other trains and didn’t have too many delays. But the whole stop-start, stop-start nature of using the train is all part of the fun of travelling on the bamboo train.

On the evening before I went over the border to Thailand, I headed to the outskirts of Battambang to a family’s home for a beautifully cooked meal on the roof terrace of their house. The plates of tasty food that were brought to our table for the group to share seemed endless and after we had finished eating we were given desert wine.

At the end of the meal the host stood up at the head of the table and shared his personal story of how he was born in 1970, just four years before the Khmer Rouge came to power. He lived the early years of his life in the countryside and didn’t go to school until aged 12 because Pol Pot’s regime banned education. He dreamed of moving to the city and making his fortune.

In 1998, the year Pol Pot died and the end of the civil war was nearing, the host’s life changed as the first tourists starting coming to Cambodia. He had enough English to be able to show visitors around the Battambang on the back of his motorbike, stopping at the key sights listed in guidebooks to allow to photographs. He will never forget the joy that came from the $6 he received from taking his first foreigner out on a trip, usually he would only earn $1 a day.

From his tourism work and building up a reputation for looking after film crews making documentaries in Cambodia, he first earned enough money to buy some land and then later build a concrete house on it, to replace the simply shack he lived in. He still guides visitors around the area, runs a cookery school with his wife and has extended his home to allow space for hosting tourists who want to enjoy home-cooked food.

That is just one person’s story, but it could speak for many more in Cambodia who are working hard and taking all the opportunities that life throws at them to build a future for themselves and their families.