Where does the City of London end and the rest of the capital begin? The quick answer can of course be determined by tracing the boundary on maps – or in certain places painted bollards. But for Londoners and visitors alike these official demarcations are meaningless for most people as they stray from borough to borough as they go about their daily lives.

On the eastern fringes of the City, many probably pass back and forth across the border with Tower Hamlets without realising it. Office workers from Bishopsgate often head to Spitalfields for a bite to eat around the market. While the market itself is now within the City limits, other parts of the vibrant neighbourhood are not.

The presence of glass-fronted modern office blocks and trendy fashion stores around the market make Spitalfields quite indistinguishable from developments in the heart of the City. But when this neighbourhood was developed as London’s main weaving district from the 16th century it was quite separate from the Square Mile and a place of refuge for Protestants – first from Holland and then later France – fleeing persecution by Catholic rulers. Dutch weavers first moved to the area in the 1580s, but the biggest wave of immigrants came a century later.

When the great diarist Samuel Pepys visited the area in 1662 he would have seen familiar remains of St Mary Spital, which had been closed during the dissolution and many of its former buildings left in ruins. Fast-forward five decades to the 1720s when Daniel Defoe visited and it had changed dramatically. “In a word, it is computed that above two thousand immigrants dwell now in that part of London, where, within about fifty years past, there was not a house standing,” he wrote.

Defoe’s population estimate was probably exaggerated somewhat, but the neighbourhood had clearly grown from the mid-17th century when speculative builders moved into the area in the aftermath of the Great Fire of London. Wheler Street became the main principal street and the most fashionable address. Sadly however only a fraction of it now remains.

Work progressed quickly at Old Artillery Ground from the 1680s, but most of it has been swept away and we have been left with Bishops Square, which has all the charm of soulless Canary Wharf. “In many ways of the loss of virtually all of the streets of the Old Artillery Ground, and all its late-seventeenth-century buildings is one of the greatest urban and historic tragedies to overtake the area – perhaps worse than almost complete destruction of the early-Georgian merchant palaces of Spital Square,” wrote the historian Dan Cruickshank in his excellent book on Spitalfields. 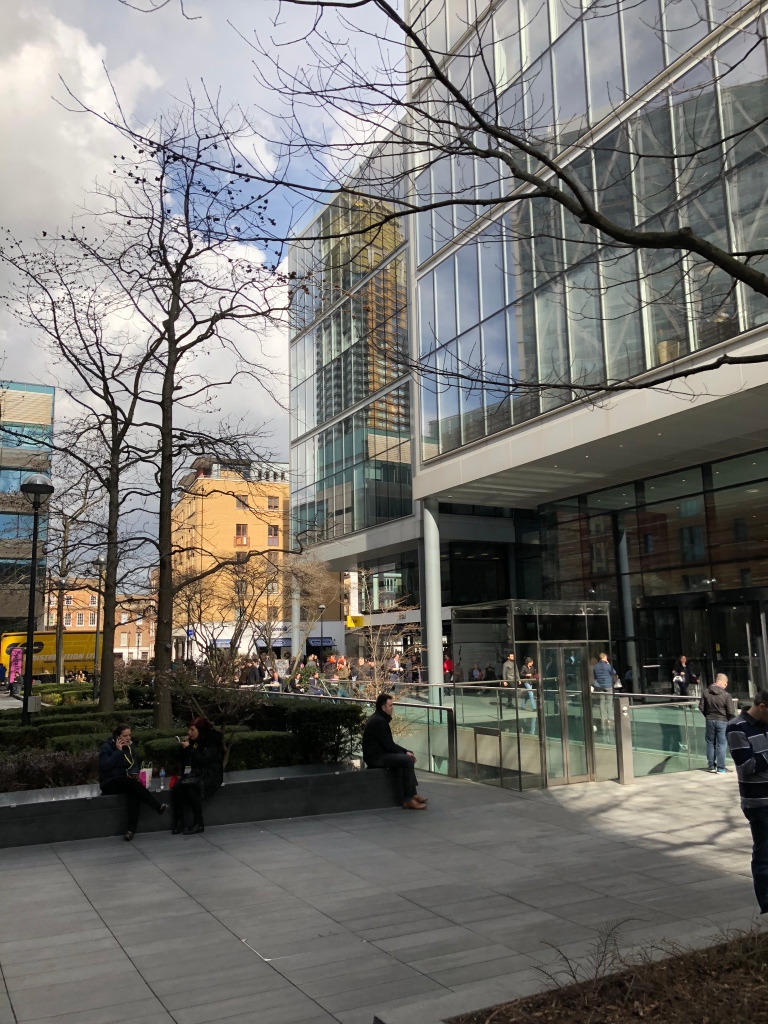 Spital Square was built on the site of the priory and hospital of St Mary Spital and became the most elegant place to live in the neighbourhood. Sadly only the only surviving property is number 37, which was built in the 1740s for the wealthy Huguenot silk merchant Peter Ogier and is today used as the headquarters for the Society for Protection of Ancient Buildings. Most of the buildings in Spital Square were destroyed from the 1920s during extension works to Spitalfields Market (which had existed since 1682 when Charles II granted it a charter to sell “flesh, fowl and roots”). When the market re-located to Leyton in the 1980s, campaigners had to fight hard to save the 1928 market building. It was saved and turned into a flea market, but following subsequent redevelopment most people now seem to come here to visit uninspiring chain restaurants and upmarket boutiques.

The main group behind the rapid development of Spitalfields in the 17th and 18th centuries was the Huguenots. They moved into a clearly defined area bordered by the Roman road of Bishopsgate to west, what is now Brick Lane to the east, the fields of Bethnal Green and Shoreditch to the north and what is now Artillery Lane (then an archery and crossbow training ground which Henry VIII had granted to the Fraternity of the Artillery) to the south.

Protestantism became illegal in France when the Edict of Nantes – which had guaranteed protestants’ safety – was revoked in 1685. I’ve written before that around 50,000 refugees came across the Channel and settled in England, but it was in Spitalfields where a large number of them settled. Most came from Lyons and Tours, forming a very tight knit community, and by the end of the 17th there were more than 1,300 weavers’ workshops in Spitalfields.

There was some initial resistance to Huguenots setting up workshops in London, with native workers worrying about them undercutting the prices of what was already being produced. But the Weavers’ Company took a more balanced position and thought that they would actually help to improve quality in the industry. Dutch weavers, remembering the struggles they had once faced, raised a sizeable £40,000 for the “relief of French protestants in 1986.

Writing later on in 1726, Daniel Defoe gave much praise to the trade noting that “the manufacturers of England, particularly those of wool…. and of silk…. amount to the greatest value of any single manufacture in Europe” and “employ more people, but those people gain in the most money” and “have the best wages for their work of any people in the world.”

People exploring Spitalfields today often make the mistake of thinking the charming 18th century terraced houses that now sell for big sums of money were typical weavers’ homes. They were of course lived in by those who worked in the silk trade, but their owners tended to be the much better off master weavers. Weavers had built homes much earlier on when they first moved to the area, but as the trade developed they were torn down and it is the fine terraces that survive.

Daniel Defoe considered in 1722 that Spitalfields encompassed the “parishes of Shoreditch, Whitechapel and Bishopsgate” and it was in these outlying areas, some distance from the centre of the neighbourhood, that the less well off workers lived in more modest surroundings. Even when the silk trade was at its most prosperous, many faced terrible, overcrowded conditions in poorly-built homes which have thankfully been swept away by slum clearances.

The silk weaving trade displayed a pyramid of power. At the top were the master weavers and merchants who lived in places like 1740-built Spital Square or well-built terraced homes, many examples of which still survive in streets such as Fournier Street and Elder Street. They would generally not have done the weaving themselves, but been the entrepreneur at the centre of a process which involved buying the raw materials and commissioning fabric designs through to employing workers and selling the finished goods to wholesalers.

Historian Dan Cruickshank discussed in his aformentioned book on Spitalfields the story of master weaver Peter Abraham, who lived with family “in some style and with a number of servants” at 19 Princelet Street. “Business activities would have been limited to meetings with suppliers, designers, weavers and mercers, presumably in one of the ground-floor rooms (now lost) that would have served also as a dining parlour – and perhaps for the occasional display of the latest products,” he wrote.

The silk was produced by journeymen weavers who mostly worked on looms in their own homes, or at the very least amongst a small group of fellow workers – perhaps family members. Large-scale factories with rows and rows of people mass producing finished articles were to come later on (although accounts of some smaller factories owned by master weavers do survive). Coppergate engravings, reproduced from a 1748 book held in the collection of Dennis Stevers House, help illustrate the weaving process and the types of machines that would be used.

For journeymen weavers, who both owned and rented looms, work was far from certain. Daniel Defoe noted that “as soon as the Market stops [the Masters] stop; if they cannot sell their Work, they immediately knock off the Looms, and the Journey-men as immediately starve and want work.” Dan Cruickshank added: “The Huguenots drove hard bargains, and although their community was clearly God-fearing and protective towards its members, when it came to business Hugenot masters were happy to work their journeymen weavers very hard indeed.”

Spitalfields became famous for floral-patterned, figured silk, with – as Dan Cruickshank noted – “clusters of flowers and various plants depicted in a manner that was startlingly naturalistic in comparison with contemporary French designs that often included flowers but depicted them in a far more stylised manner.” The popularity of the design started to decline from the 1770s, but its hand-production continued in Spitalfields well into the 19th century. Of the pattern designers Anna Maria Garthwaite, of Princes Street (now Princelet Street), was perhaps the most celebrated and examples of her work are on display at the Victorian & Albert Museum. 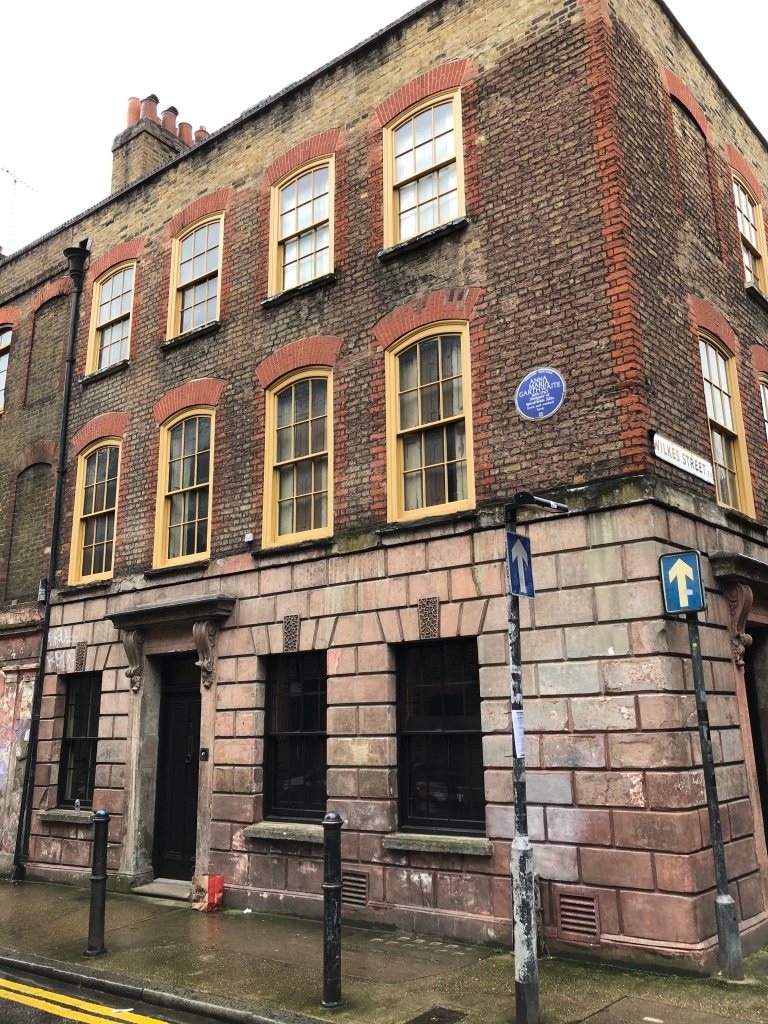 Spitalfields may be just a stone’s throw from the City of London, but in the 18th century you could have been forgiven for thinking you were in a town in France. The French language was spoken and an array of institutions, from friendly societies to soup kitchens, were established that would have reminded the Huguenots of home.

Ten Huguenot churches existed in Spitalfields from 1687, including one that could seat 1,500 people. L’Eglise Neuve on Brick Lane, was – as I’ve written in an earlier post – founded in 1743, a date noted on within a sundial on an external pediment. The building, consisting, according to Dan Cruickshank, of “a simple but elegant exterior, with elevations inspired by antique temples and crowned with large and noble pediments” was later used as a synagogue and, since 1976, has been the Jamme Masjid Mosque. Two other Huguenot church buildings survive – one was L’Artillerie, built in 1766 and now Sandys Row synagogue. The other was La Patente, built in 1719, and now Hanbury Hall, an events venue that during the day is a pleasant cafe where creatives meet up and tap way at their laptops.

As well as performing regular religious services, baptisms and marriages were held at Huguenot churches in Spitalfields, but after the ceremonies they needed to be registered at an Anglican church as well. Many people living in the area had fled France with nothing and so the Huguenot church became a vital place for poorer members of society to be given aid. Huegenots also formed mutual benefit societies to provide protection when they were too sick to work.

Spitalfields in the 18th century was a violent place at times, not least as weavers protested and called for better pay and the banning of cheap imports. But it was also considered a well run neighbourhood. As the Liberty of Norton Folgate, it boasted almshouses for the elderly and its own courthouse. Local taxes were collected to pay for daily rubbish collections, nightwatchmen and street lamps. Huguenots kept birds in aviaries, bought from Club Row, and shopped at Spitalfields Market, buying parts of animals that butchers had traditionally thrown away (this helped to popularise new dishes like oxtail).

The neighbourhood also boasted a number of societies, for everything from flower arranging and history to bird watching and music. The Mathematical Society started gathering, from at least 1784, “at the sign of the Black Swan in Brown’s Lane, Spitalfields.” An overview of how the organisation operated was published in a pamphlet that year, explaining that member numbers “shall not exceed the square of eight” and that it “shall not be removed above half a mile from Spitalfields Church.” Over the years it hosted a regular series of public lectures, but by the 1830s the society was struggling and in 1845 it was dissolved, with the 19 remaining members given life membership of the Royal Astronomical Society.

Spitalfields was a thriving place to be in the 18th century, but as the trade declined the whole area suffered.

Next week: As I continue my series on Spitalfields, I look at the downfall of a neighbourhood as the silk weaving trade collapses.