Bringing the world to Chicago: Reaching the skies after the Great Fire

In 1893 America and the world came to Chicago. An incredible 27 million people – nearly half the country’s population at time – visited for celebration of four centuries of progress since Christopher Columbus landed in this continent. The World’s Fair, as it became known, put the city on the map.

The main expo was at the 686 acre Hyde Park – seven miles south of downtown – where some 200 structures were built, along with more than a million flowers and trees planted. It became known as the White City as all the neoclassical-style buildings were painted white, which was cheaper than using marble (and was the first time spray paint had been used).

Americans lined up to take in new innovations, such as the electric light, moving walkways, long distance phone calls, an early prototype of the fax machine and moving pictures. They are all things we today take for granted, but at the time were revolutionary.

One of the star attractions was the world’s first Ferris Wheel, which could carry 2160 passengers in 36 cars, each the size of a bus and complete with their own bars. The current big wheel at Navy Pier – Chicago’s modern day fun park with beer gardens, a splash ride, boat trip and great views of downtown – is not even as big as the 1893 one.

While the Fine Arts Building survives at the old expo site and is today the Museum of Science & Industry, most of the structures erected at Hyde Park have gone. But there are many places that were popular in 1893 in downtown Chicago.

What is today the fabulous Art Institute of Chicago – one of the city’s most popular tourist attractions – was where debates on subjects ranging from feminism to world religion were held as part of the World’s Fair. It became an art gallery the following year.

People visiting Chicago for the World’s Fair needed places to stay. There are a number of surviving hotels from era which are still used today, including the Congress Plaza Hotel. This fine building on South Michigan Avenue was connected via an under-the-street tunnel to the Auditorium Theatre, which was then the largest theatre in the world and could accommodate 4200 people. The venue was was only saved because it was deemed too expensive to demolish. Today, it is in the caring hands of Roosevelt University.

Chicago became known as the Windy City because people talked up their home city so much to win the World’s Fair. But there were a number of controversies, not least that from the thousands of workers who laboured day and night to complete the expo, 18 died during the build. And there were also protests because African Americans’ culture was not represented in the pavilions.

The population of Chicago stood at one million in 1893, making it the second biggest city in America at the time. But the World’s Fair was particularly remarkable given that two decades earlier much of the city had been flattened by a devastating fire. The blaze left 100,000 people homeless (around a third Chicago’s inhabitants at the time) and 300 died. The World’s Fair was a chance to celebrate two decades of rapid development in the new city.

There has been much speculation and debate over the years as to what caused the Great Fire of Chicago. At the time it was blamed on a cow at Mrs O’Leary’s farm, southwest of downtown, which is said to have stamped on a lantern (perhaps to stop a young child being blamed for committing the act). This resulted in some hay being ignited and a domino effect led to the wider town being set alight.

Mrs O’Leary and the animal (its cowbell is on display in the Chicago History Museum) were officially exonerated of blame by Chicago City Council for causing the fire in 1997, and most now accept that it was a combination of factors that led to the events playing out as they did. It was an unusually warm October day when the fire started and the fact that the buildings were then predominantly made of wood meant it spread quickly. The River Chicago is said to have been so polluted at the time that the chemicals on the surface were pictured in newspapers ablaze. And back then there were just 185 firefighters in the city.

Some people survived thanks to a tunnel built three years earlier under Washington Street, which acted as their escape route from downtown. And today you can visit buildings that dodged being raised to the ground in 1871, such as Old St Patrick’s Church in West Loop, where the blaze stopped just two blocks away. After 36 hours, the fire was extinguished by the start of a downpour of rain. The Great Fire became so well known around the globe that there was even a fire museum at the 1893 World’s Fair.

Devastating as it was, what the Great Fire did was present a blank canvas for a new generation of architects and designers to create a new city. “Chicago shall rise again,” reported the Chicago Tribune just a few days after the fire. And people did indeed flock here to help with the building challenge and a new city was born.

In London people concerned became that Chicago’s library would have lost all its books in the fire. The city didn’t actually have a library at the time, but that didn’t stop donations from Britain flooding in, including books from Queen Victoria herself.

The buildings erected immediately after the Great Fire are few and far between. One example from 1871 is the four-storey structure in West Adams Street, which is today occupied by ‘Buffet the Berghoff’. Many of the early post-Fire buildings were demolished to make way for new, taller buildings. With Chicago hemmed in on all sides by water, city planners needed to make the very most of available land.

“In the centre of cities like Chicago and New York, where land was scarce and costly, businesses were keen to add as many storeys as possible and now, in the age of steel, they could – it almost seemed that that sky was the limit,” wrote historian David Reynolds in his book, America: the Empire of Liberty.

The first building in Chicago – and indeed the world – to be called a skyscraper (defined by the iron steel frame which held it together) was the 10-storey Home Insurance Building, designed by William Lebaron Jenney in 1884. Sadly it was torn down in 1931 to build the splendid Art Deco Field Building, now occupied by Bank of America and boasting a marble and chandeliers in the lobby. But people in Chicago still celebrate that their city got their first in constructing a skyscraper.

Lebaron Jenney’s work inspired many others to create spectacular buildings in Chicago. The architect Louis Sullivan, who built his career in Chicago, said that people should realise that “the problem of tall office buildings is one of the most stupendous, one of the most magnificent opportunities that the Lord of Nature in His beneficence has ever offered to the proud spirit of man.” Tourist guides for the 1893 World’s Fair encouraged visitors to spend some time taking in the downtown skyscrapers.

If you take a tour with the Chicago Architecture Foundation, you’ll have an expert guide to show you some of the city’s most iconic buildings. I don’t think I’ve been to anywhere else in the world where people speak so passionately about their architecture. But then again they do have a great story to tell, with wonderful masterpieces, some of which are so large that they cover a whole block, allowing people to walk through the lavish lobbies when its too hot or too cold to walk on the streets outside.

Friezes inside the Marquette Building

The Reliance Building, dating from 1895, was the first majority glass-panelled structure, leaving a steal beam to do the hard work. It’s also worth having a look at the Rookery, with Islamic and Moorish designs on the outside and built in 1888 on the site of where crow’s used to nest – hence the name. And inside the Marquette Building (completed in 1895) there are some wonderful friezes charting the encounters with Native Indians and the Frenchman Jacques Marquette during his exploration of the Chicago region with Louis Jolliet in the 1670s. 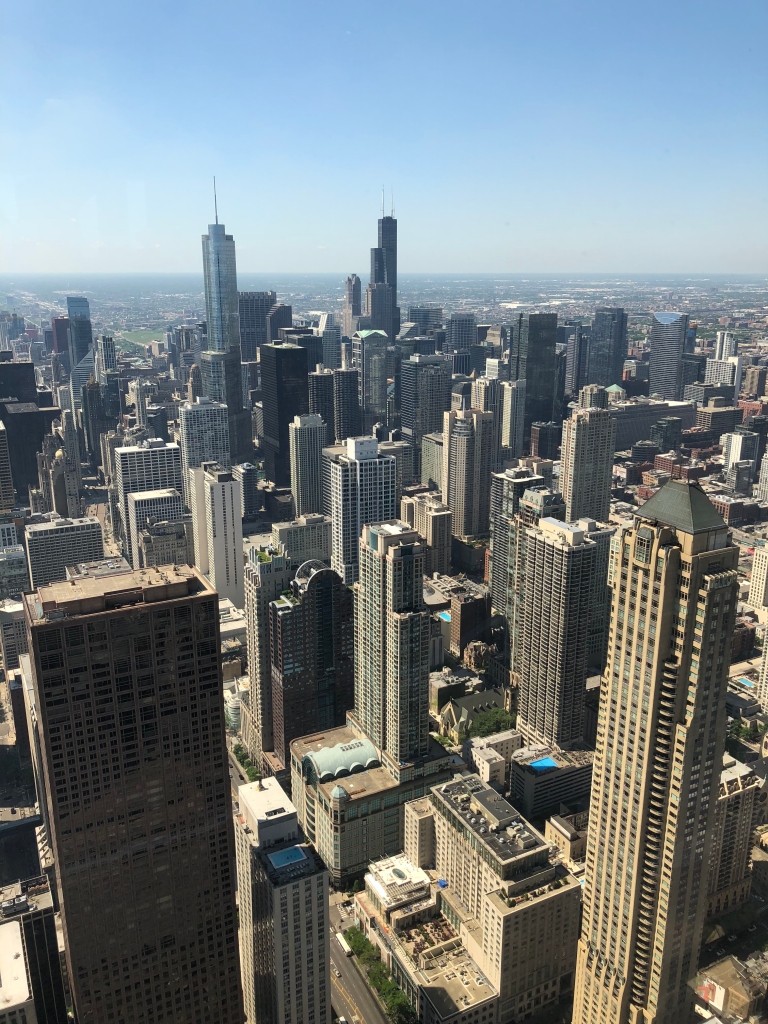 Downtown Chicago, as seen from the Hancock Tower

Places to stay, places to shop

But Chicago wasn’t all about work. By the 1890s State Street was Chicago’s main shopping area and boasted a number of prestigious department stores. One of the most prominent was Marshall Field which is now, to some locals disgust, part of Macy’s. The iconic building covers a whole block and boasts in its north atrium an awe-inspiring 6000-square-foot dome designed by Louis Comfort Tiffany (Tiffany glass was first seen at the World’s Fair). It took 50 artists 18 months to complete. Outside the building, the bronze corner clock has been in place for more than a hundred years.

Marshall Field – named after the man who established it – can claim a number of firsts. Ladies arrived at the store by carriage and would often spend the whole day inspecting items in the various different departments, with their purchases then delivered to their homes the next day (home delivery was pioneered here). To keep customers here for longer, the first restaurant in a retail store was opened here and you can still enjoy a meal in the wonderful wood panelled Walnut Room (providing great services, but prices are only slightly more than those charged at the food court outlets on the same level). And Marshall Field placed considerable emphasis on great customer service, pioneering the money-back guarantee and the coining the phrase: “Give the lady what she wants.”

Some fine hotels were built in Chicago in the latter part of the 19th century. The Palmer House Hotel (now owned by Hilton) was completed just before the Great Fire and was quickly destroyed. Re-opened in 1875, it stands as the oldest continuously operated hotel in the country and boasts an air of grandeur, with Tiffany chandeliers and beautiful frescoes in the lobby. The Palmer was the first hotel to offer electric lighting and chocolate brownies were also invented here.

Businessmen also stayed at men’s clubs, such as the Chicago Athletic Club, which was built in 1893 with a host of facilities. It’s today an upmarket hotel and if you look in one of the downstairs bars you will see the words ‘deep’ inscribed on the floor from when this room was actually a swimming pool.

To help people get around the expanding city, the El, an elevated train line, was built in the 1890s. The rusting steel structure which you see as you explore downtown has changed little since 1893 when passengers travelled on it to get to the World’s Fair (you can see the last remaining original 1892 car at the Chicago History Museum). It was seen at the time as preferable to building an underground Subway given that Chicago stands on marshland. The El today remains a great place to take in some of the city’s most iconic buildings.

The Great Fire of 1871 and the World’s Fair of 1893 are two of the most important events in Chicago’s history. As you visit the city today, their influences on the built environment have not been forgotten. 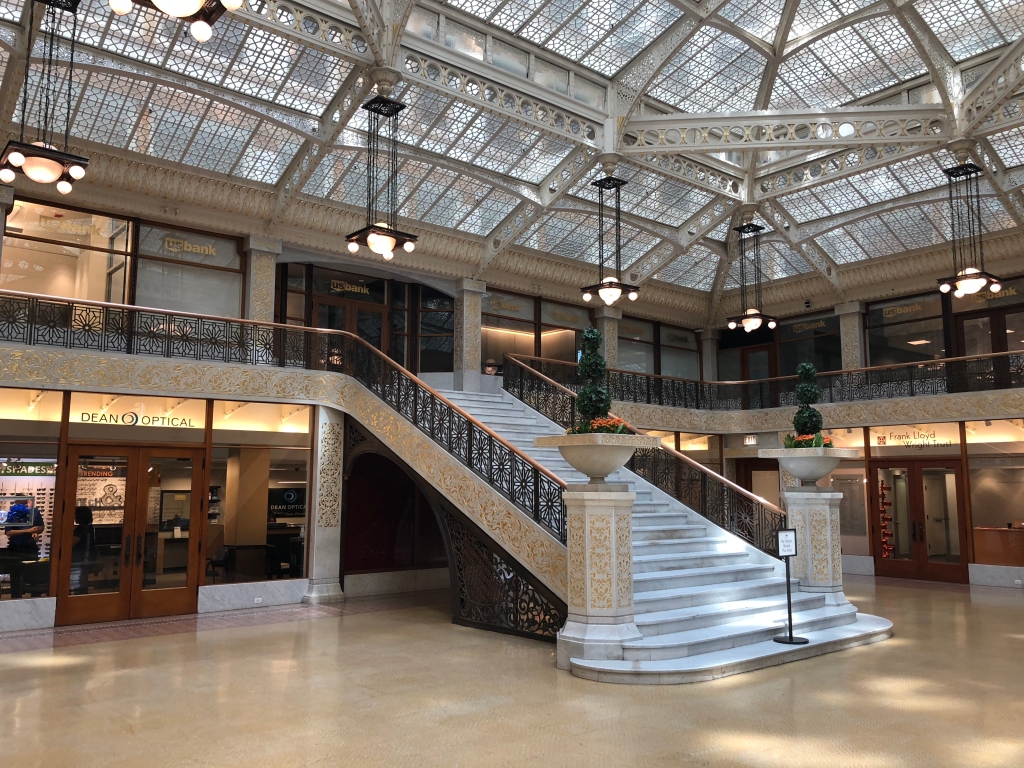 Inside the Rookery building