Standing on the upper lawned terrace of The Rookery and looking to the ornamental gardens below, you have the feeling of being in the grounds of a great English country house. Wide steps lead down to a series of themed areas, with secluded spots where you can read […]

Barbican – London’s love it or hate it neighbourhood

Barbican is like Marmite – you either love the area on the fringes of the City of London or you hate it. There is no middle ground. For some, it is one big brutal concrete monstrosity that is a blot on the landscape and should never have been […]

Eltham Palace in 1828 was in sorry state. “This stately hall is now used as barn, and the men thresh the corn where, in ancient days, Edward III held a Parliament, and gave a sumptuous entertainment to the captive King John of France,” reported the Sussex Advertiser. And […] 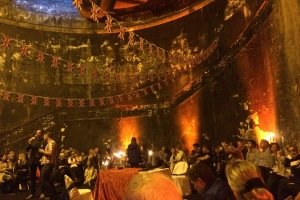 Theatre underground at the Eighth Wonder of the World

There can’t be many theatres in the world where you need to get down on your hands and knees so you can crawl into the auditorium. But then again, plays aren’t typically performed in railway shafts with London Overground trains whizzing beneath your feet, causing the floor to […]

The entrance to Woolwich foot tunnel on the south bank of the Thames is not the most pleasant of places to start a Bank Holiday walk. While Waterfront Leisure Centre – the first landmark I spotted bar some public toilets – may be a fun place for children […]

Landing at London City Airport is an absolute pleasure. I’ve flown in and out of there a few times recently and each time I’ve been on the platform at the adjoining DLR station within minutes of my plane touching down. If I’d have gone to Gatwick or Heathrow, […]

Abbey Mills Pumping Station cuts a striking impression on the east London skyline. The palatial Victorian monument near Stratford will be familiar to many given it has featured on both the small and big screens in everything from Batman to The Bill, but there is nothing quite like […]

Load up the website of the Worshipful Company of Cutlers and look at the organisation’s coat of arms. Flanking a red painted shield with three pairs of crossed swords, the eye is drawn to two white elephants standing on their back legs and with their trunks raised. The […]

Roman London illuminated on the banks of the Walbrook

Out of the dust, a new European headquarters for media company Bloomberg is emerging near Bank station. The new building will consist of two bronze-and-stone towers, connected by sky-bridges, and as well as office space will contain restaurants and shops. Bloomberg says it will become a “dining and […]